New Financial, a London think-tank, claims to have identified 275 City firms which are moving close to £1 trillion “in assets” because of Brexit, impacting jobs and tax receipts in the UK. Although the headlines which greeted this report eagerly trumpeted the £1 trillion figure, New Financial’s numbers actually add up to the less eye-catching sum of around £900bn.

New Financial’s report does not break down the different assets making up the £800bn of banking assets which constitute the bulk of that £900bn figure (the £100bn remainder are fund and insurance assets). In a post on our blog, we use publicly available information to estimate that breakdown and offer a rigorous estimate of the revenue, profit, tax and jobs impact which appears to be absent from New Financial’s piece.

New Financial’s report was published when the actual job relocations announced by the relatively small number of City institutions saying they were affected by Brexit had reached 5,000 at most (with little change since), confounding mainstream think tank forecasts of 75,000 (and apocalyptic predictions as high as 230,000). Although acknowledging the reported 5,000 figure, New Financial claim that many more City firms will, eventually, realise or admit that they need to relocate staff due to Brexit.

Our blog has, however, argue since 2016 that only the City’s small, peripheral retail activities are affected by Brexit (retail here essentially means transactions with individuals and SMEs), and that this explains why the actual job relocation numbers have come in below think tank forecasts so dramatically. Our own forecast simply adds up the Brexit-related job relocations announced by individual banks (please note those announcements are based on a no-deal scenario so they are worst-case numbers): 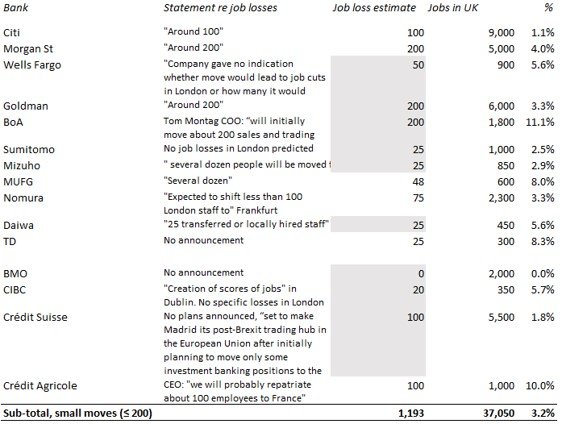 One of the reasons the number is so low is, we argue, that most City firms announcing relocations already have a significant number of staff in the EU who are responsible for generating their revenue there. All they need, in order to continue generating that revenue, is to hire a small number of employees to staff up the EU subsidiaries through which their EU business will be conducted post-Brexit. In addition, a small number of City firms sell financial products to EU private banking customers or SME customers direct from London. Those roles will also need to relocate. However, we know from UBS’ statement when it reduced its Brexit-related job relocation forecast from the headline grabbing 1,000 figure to the less reported new figure of 250 jobs, that only client-facing employees need to relocate, not support staff. As those client-facing employees generate a lot of revenue, the number of job relocations associated with the revenue loss is small.

If the “£1 trillion” assets highlighted in New Financial’s report is able to demonstrate that, contrary to our understanding, there really are some wholesale activities in the City at risk from Brexit, then their expectation that there are more job losses to come on top of the 5k already announced may be justified. If they do not, then our forecast, based on announced relocations so far, stands firm.

To determine whether our scenario or New Financial’s is the correct one, our post analyses court documents published when Barclays was allowed to transfer £116bn to Barclays Bank Ireland (BBI) to continue serving EU customers post-Brexit (the “Scheme Document“), together with the 2018 BBI annual report and an FAQ document about BBI on Barclays’ website. In previous work, Barclays was identified as the biggest UK lender to EU non-bank clients, and the FAQ document estimates that €250bn will, eventually, be transferred to BBI, which is just under 28% of the £800bn banking assets identified by New Financial. Barclays’ documents are, therefore, highly representative of those assets.

Barclays’ FAQ document gives a pre-tax profit estimate for the transferred assets of just €400m, implying a pre-tax yield on assets of only 0.16%. This offers us a convenient shorthand method of calculating the tax impact of the whole £900bn assets identified by New Financial. If the 0.16% ratio were to be extrapolated to the whole of the £900bn, the tax impact would only be £259m, less than 0.6% of UK corporation tax – in other words a trivial amount on the scale of City transactions.

The Barclay’s Scheme Document gives us a detailed list of all the assets being transferred to BBI in Dublin, which allows us to make a more precise estimate of the £800bn banking assets identified by New Financial: 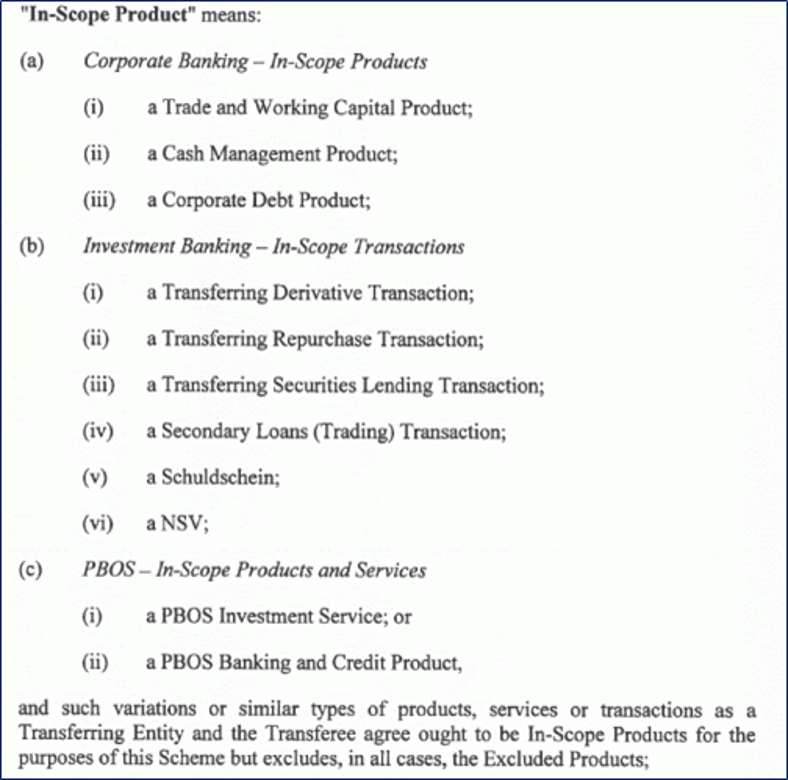 That list confirms, in black and white, our blog’s hypothesis that the City’s wholesale activities are not affected by Brexit. All of the products listed are either regulated loans, deposits (or similar products), SME derivative contracts or private banking (“PBOS”) assets. The £35bn insurance funds and the £65bn investment funds transferred (according to New Financial) are also retail products. Our detailed calculations of the profit and tax UK losses resulting from these transfers is as follows:

It is noteworthy that £229bn of the transferred “assets” included by New Financial are actually liabilities which earn no income. The £900bn transferred assets only generate £11.6bn revenue and £2.7bn pre-tax profit, meaning the tax impact (circled in red in the table above) is a mere £487m. This is more than the short cut £259m estimate we made above using the pre-tax profit estimate from Barclays’ FAQ document. That may be because we have been too aggressive in our revenue estimates in certain areas (e.g. securities lending) or because we haven’t included the cost of lending large amounts of deposits on the inter-bank market in a negative rates environment. Whatever the case, the Barclays documents confirm that no wholesale activities are threatened by Brexit and that the impact on HMRC of assets transfers by all banks is less than 1% of UK corporation tax receipts.

Of course, there is a margin of error in these estimates and we are happy to stick our neck out by producing a calculation based on the incomplete available information. But given that the assets have to be multiplied by asset margins which are at best a few percent, then by profit margins which are at best in the mid-30s and then by the UK tax rate of 18%, it will be almost impossible for the tax impact to be any more than a few percentages of a percent of assets (we estimate <0.06%).

Indeed, New Financial’s recently revised figure of 332 City firms “moving something” to the EU compares to recent reports indicating that around 1,000 EU firms have moved in the opposite direction and opened subsidiaries in the UK since Brexit. Moreover, the BBC reports that “few jobs in London are expected to be affected” by the Barclays move, despite Barclays being the largest City company in terms of relocated assets.

New Financial are continuing to promote these scare stories to convince policy makers in the UK they have a lot to lose if they don’t “get a deal in Financial Services,” or do not remain aligned with EU regulations in the absence of such a deal. They focus on the large asset number, not just because it is easier to calculate, but because it is more impressive and persuasive. The summary of their piece (which is behind a £250+VAT paywall) suggests that its contents are woefully superficial, a form of glorified stenography. Not only does New Financial defend the dying attempt to keep the UK closely attached to the EU post-Brexit, it generates agenda-driven headlines with no real substance.

Michael Snyder: Why Is Iran Flying a Blood Red Flag over a Famous Mosque That Is Directly Associated with the Mahdi?

Study Discovers that if the Debt Machine Was Turned Off, the U.S. Would Immediately Plunge into a Horrifying Depression

How to Preserve British Sovereignty During the Transition Period?