The path through the solar system is a rocky road.

Asteroids, comets, planets and moons and all kinds of small bodies of rock, metals, minerals and ice are continually moving as they orbit the sun. In contrast to the simple diagrams we’re used to seeing, our solar system is a surprisingly crowded place.

In this stunning visualization, biologist Eleanor Lutz painstakingly mapped out every known object in Earth’s solar system (>10km in diameter), hopefully helping you on your next journey through space. 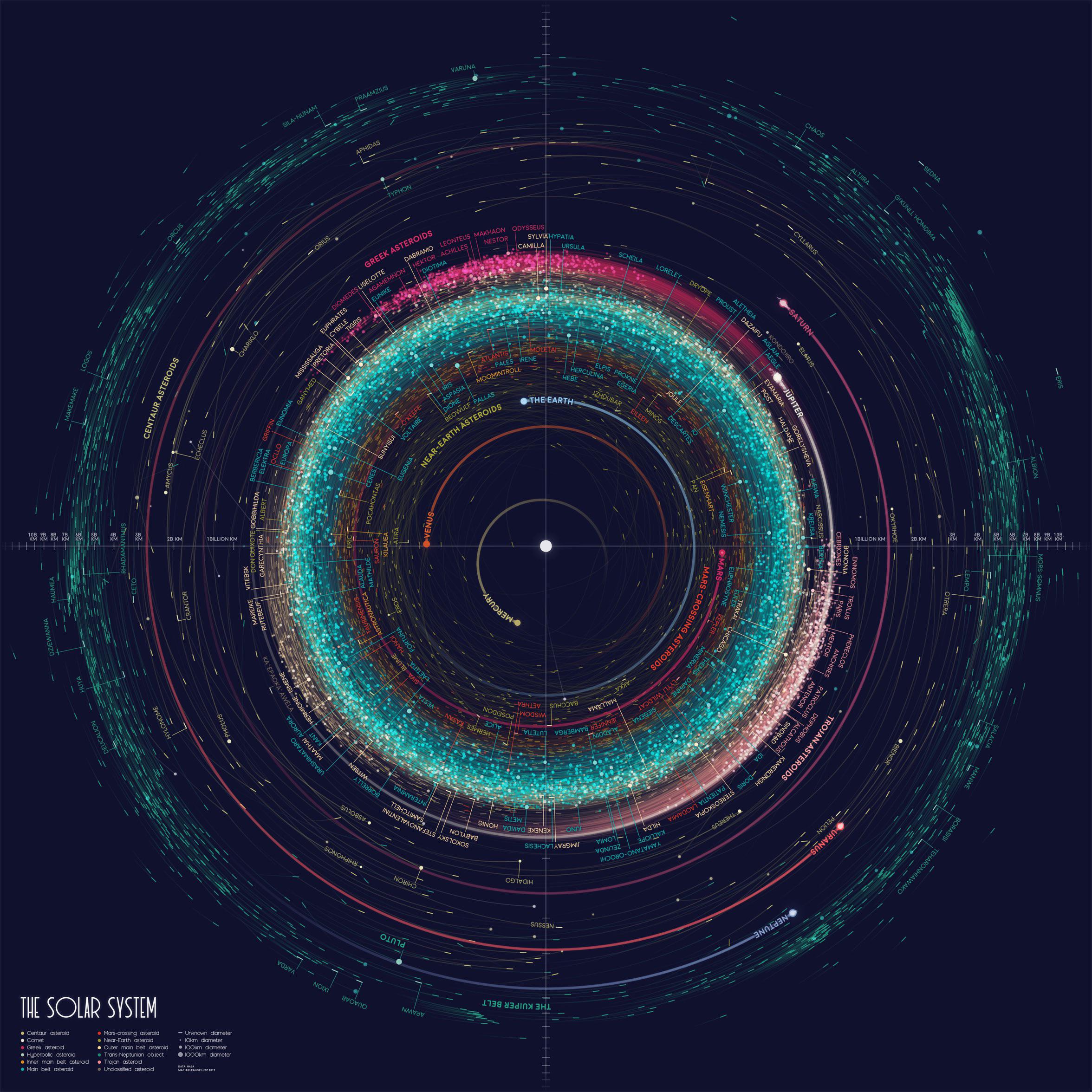 From this data, Lutz mapped all the orbits of over 18,000 asteroids in the solar system, including 10,000 that were at least 10km in diameter, and about 8,000 objects of unknown size.

This map shows each asteroid’s position on New Year’s Eve 1999.

The Pull of Gravity

When plotting the objects, Lutz observed that the solar system is not arranged in linear distances. Rather, it is logarithmic, with exponentially more objects situated close to the sun. Lutz made use of this observation to space out their various orbits of the 18,000 objects in her map.

What she is visualizing is the pull of the sun, as the majority of objects tend to gravitate towards the inner part of the solar system. This is the same observation Sir Isaac Newton used to develop the concept of gravity, positing that heavier objects produce a bigger gravitational pull than lighter ones. Since the sun is the largest object in our solar system, it has the strongest gravitational pull.

If the sun is continually pulling at the planets, why don’t they all fall into the sun? It’s because the planets are moving sideways at the same time.

Without that sideways motion, the objects would fall to the center – and without the pull toward the center, it would go flying off in a straight line.

This explains the clustering of patterns in solar systems, and why the farther you travel through the solar system, the bigger the distance and the fewer the objects.

The Top Ten Non-Planets in the Solar System

We all know that the sun and the planets are the largest objects in our corner of the universe, but there are many noteworthy objects as well.

While the map only shows objects greater than 10 kilometers in diameter, there are plenty of smaller objects to watch out for as well.

An Atlas of Space

This map is one among many of Lutz’s space related visualizations. She is also in the process of creating an Atlas of Space to showcase her work.

As we reach further and further beyond the boundaries of earth, her work may come in handy the next time you make a wrong turn at Mars and find yourself lost in an asteroid belt.

“I knew I shoulda taken that left turn at Albuquerque!”