It’s been a good 48 hours since Iran’s missile strike at Ayn al-Assad and Erbil. Both Washington and Tehran stared into the abyss and did not like what they saw. We averted a full fledged shooting war through a little skill, a lot of fear and a healthy dose of luck. I’m sad to say that the skill was Iranian, particularly the skill of the IRGC Aerospace Force.

There is still no Western consensus on the number of missiles fired or what type were fired. Based on various reports, the IRGC Aerospace Force launched anywhere from ten to twenty two missiles. Most of the missiles were solid fueled one stage Fateh type SRBMs (short range ballistic missiles), either Fateh-313 or Zolfaghar. The Fateh-313 became operational in 2015 and has a 500 km range and is touted as being highly accurate due to Iranian advances in satellite guidance systems made in the last fifteen years. The Zolfaghar, developed from the Fateh-313, has a range of up to 800 km was introduced in 2016. Both these SRBMs have an estimated CEP (circular error probable) of 100 meters. In addition to the Fateh-313 or Zolfaghar SRBMs, a smaller number of Qiam-1 SRBMs were fired, probably at Erbil. The Qiam-1 is a liquid fuel SRBM with a range of 800 km, a payload of 750 kg and a CEP of 500 meters. The IRGC fired both Zolfagars and Qaiam-1s into the Deir ez-Zor region of Syria in June 2017 targeting IS jihadis. All these SRBMs are roughly equivalent to Russia’s Iskandar SRBM. 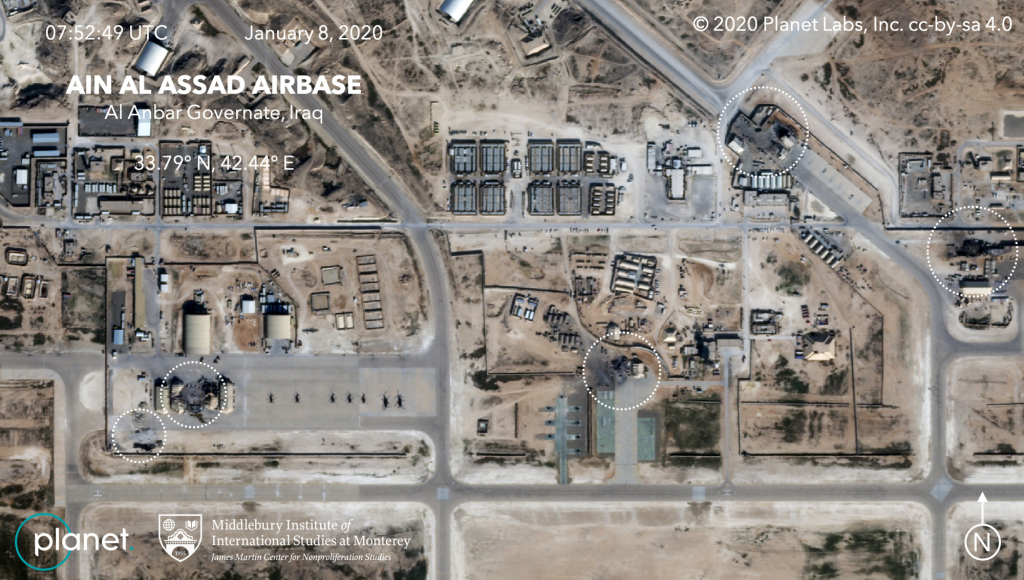 A CEP of either 100 or 500 meters is not pinpoint accuracy. But the Pentagon is saying that Iran intentionally missed US troops at the bases. This demonstrates one thing… Iran has a high degree of confidence in her missiles. You don’t launch  missiles over hundreds of miles, with the intention of deliberately missing your enemy’s troops, unless you are really confident in your missiles’ CEP. Last year’s DIA study on “Iranian Military Power” had this to say on the precision of Iranian missile forces.

“The use of improved guidance technology and maneuverability during the terminal phase of flight enables these missiles to be used more effectively against smaller targets, including specific military facilities and ships at sea,” the Defense Intelligence Agency said in its most recent assessment of Iran’s military. “These enhancements could reduce the miss-distance of some Iranian missiles to as little as tens of meters, potentially requiring fewer missiles to damage or destroy an intended target and broadening Iran’s options for missile use.”  (DIA)

Even so, I seriously doubt the IRGC made a special effort to not kill or injure Americans. Although it was not the primary objective of the strike, they certainly wouldn’t have cried over our casualties. However, Brigadier General Amir-Ali Hajizadeh, Commander of the IRGC Aerospace Force did say during a press conference today that “the strikes were not meant to cause fatalities. We intended to deliver a blow to the enemy’s military machine.” He also said he fired only thirteen missiles, but prepared several hundred for launch. He was clearly not worried about some level of US casualties, not with the possibility of hundreds of missiles. He definitely got our attention and with only thirteen missiles and a threat to take the crazy train all the way to Hell if that’s what we wanted. Even General Milley said he believed the attack was meant to be deadly. At least he got that right.

I was shocked that not one Iranian missile was intercepted. It appears CENTCOM did not even have a capability to intercept missiles at the Ayn al-Assad Air Base. That is military incompetence. A slew of officers should be relieved for that egregious incompetence including the CINC CENTCOM. No wonder the neocon wonder boys in the Pentagon and White House decided not to join the dance in the wee hours after the Iranian strike. Talk about scared straight.

Iran is not done. As General Hajizadeh said in today’s briefing, the strike “was the starting point of a great operation.” The Iranians and their regional allies are controlling the tempo of operations to their advantage. They will now fight us on their terms to pursue their immediate goal of removing our forces and influence from Iraq and Syria. As Colonel Lang said, we should get out of Syria, Iraq and Afghanistan and not stop there. We need to leave Israel, Jordan, Saudi Arabia and Lebanon as well.

Larry C. Johnson: We Were Warned about the Deep State, but Refused to Listen

ASEAN Will Refuse to Choose Sides in Any China-US Conflict: An Exclusive Interview with Professor Tan See Seng