Many Americans are growing increasingly concerned by the stringent measures being taken by various state and local authorities to slow the spread of the novel coronavirus, not the least of which is Attorney General William Barr.

In a Wednesday interview with Fox News host Laura Ingraham, Barr discussed a few of the more alarming byproducts of attempts to throttle the virus, including extreme enforcement of social distancing and even a proposal by billionaire Bill Gates to create digital vaccine certificates for proof of immunity to viruses.

“Bill Gates, the Gates Foundation are in favor of developing digital certificates that would certify that individuals, American citizens, have an immunity to this virus and potentially other viruses going forward to then facilitate travel and work and so forth,” Ingraham said, according to The Daily Wire. “What are your thoughts from a civil libertarian point of view about these types of—what some would say tracking mechanisms that would be adopted going forward to reopen our broader economy?”

“Yeah, I’m very concerned about the slippery slope in terms of continuing encroachments on personal liberty,” Barr answered. “I do think during the emergency, appropriate, reasonable steps are fine.”

“But a digital certificate to show who has recovered or been tested recently or when we have a vaccine who has—of people who’ve received it,” Ingraham went on. “That’s his answer in a Reddit ‘Ask Me Anything.’ They had a little forum.”

“Yeah, I’d be a little concerned about that, the tracking of people and so forth, generally, especially going forward over a long period of time,” Barr answered. 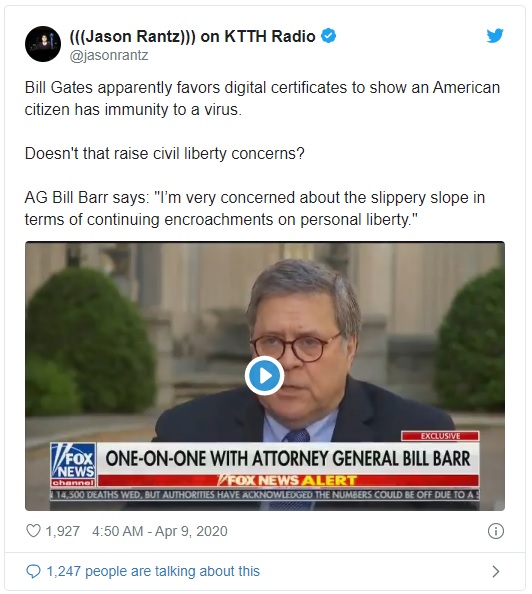 Barr also addressed the social distancing regulations taking place in several states, calling them “draconian” and strongly suggesting that they should be revisited next month, according to the Democrat and Chronicle.

When asked by Ingraham about the balance between personal and religious liberty and the need to protect people from the coronavirus, Barr said the federal government would be “keeping a careful eye on” states’ use of emergency powers and executive orders to regulate the lives of their citizens.

Ingraham stated that “right now, we have no freedom of worship” and “no real freedom of assembly” because of these strict measures.

State and local officials should be “very careful to make sure…that the draconian measures that are being adopted are fully justified, and there are not alternative ways of protecting people,” Barr added.

In light of available information on the virus in March, however, Barr said he believes President Donald Trump “has made the right decisions” in issuing strict social distancing guidelines “for the right reasons.”

After the Trump administration’s “30 Days To Slow the Spread” plan elapses at the end of April, Barr said that “we have to allow people to adapt more than we have and not just tell people to go home and hide under the bed, but allow them to use other ways—social distancing and other means—to protect themselves.”

Echoing previous comments by Trump on the devastating hit social distancing has had on the economy, Barr said, “just measured in lives, the cure cannot be worse than the disease.”

In a press briefing on Wednesday, President Trump said the country was “ahead of schedule” toward reopening but expressed that virus cases would need to be on the “downward slope” before that could occur.

“It would be nice to be able to open with a big bang and open up our country—or certainly most of our country,” he said. “And I think we’re going to do that soon.  If you look at what’s happening, I would say we’re ahead of schedule.”

As we’ve recently reported, cases of peaceful, law-abiding citizens being arrested for such things as going for a drive or playing in an empty park with their children are continuing to stack up.

A handful of individuals across the country have even been arrested for offering “essential” services to abortion-minded women outside clinics while still obeying social distancing guidelines.

At what point will we acknowledge that the “cure,” as Barr said, is “worse than the disease?” We may already be there.