I wake up this morning to multiple U.S. cities on fire, the police are under siege and V for Vendetta trending on Twitter. Hackivist group Anonymous has declared war on the government and a whole lotta people are very confused about what’s going on.

I have no doubt the riots, looting and burning happening around the U.S. today is a directed, coordinated attack on the institutions of this country.

But saying that doesn’t mitigate the real anger and desperation of so many Americans and the victims of this government. It doesn’t mean that part of this isn’t truly organic and real.

When people lose everything, the saying goes, they lose it.

In my last post I talked about the solipsism of what version of America people have in their heads. One screen, two movies and all that.

The two movies that are playing out now is the incredulous one exemplified by this tweet: 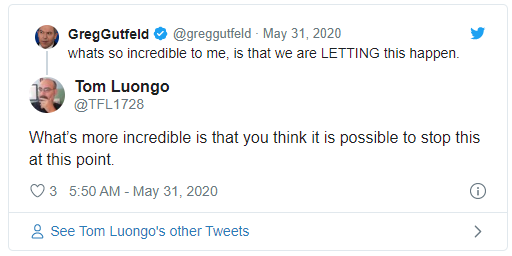 How many times in the past few days have you heard a politician say, “This isn’t who we are.”

Sadly, it is exactly who we are. And we’re all to blame for it.

America, the shining house on the hill overlooking the Utopia of Boomerville is slowly eating itself. The facade still looks good from down in the valley but the interior looks like the house from The Money Pit.

The other movie is out on the streets protesting the fundamental inequality of the American system. It’s being stoked to violence by brick-throwing, mask-wearing Marxists too dumb to realize that they will be the first ones shot if the Marxists they serve win the day.

Scrolling through my Twitter feed last night I saw the true state of hatred for the U.S. empire from some of my most ardent followers who live outside the U.S.

But aren’t we supposed to hate the sin, not the sinner?

Isn’t that supposed to be the great ‘hack’ of Christianity?

The capability for forgiveness and temperance, to remember that we all have the capacity for redemption? Or is that just a cute Hollywood lie that doesn’t change the world when the moment of crisis arrives?

I’ve said before and I’ll say it again, when you uncover someone’s existential fear you reveal their inner tyrant.

I wouldn’t wish looting and rioting on Canadians or Aussies, Germans or Brits (all complicit in the U.S. government’s crimes around the world, by the way) when some of them reached their limit and lashed out in inchoate rage.

I’d weep for it having come to that, for people to believe this is the only way they feel they will be heard.

I’ve succumbed to that rage at times. I’ve been that guy. And it’s shameful.

A lot of people in America today are waking up to what they are capable of and it’s time to integrate that into our image of ourselves, our psyches and, hopefully, our politics.

To reject the false image of a shining beacon of truth and accept the corruption, stagnation and violence for what it is.

And that it is our job to neuter those behind this brewing civil war and prevent them causing this chaos ever again, anywhere.

Those folks cheering the collapse of the U.S. on display today have no idea of the chaos that comes to their shores the moment the U.S., for all its flaws, unravels in this disorderly a fashion.

Chaos is never pretty, that’s why it’s chaos. The U.S. has unleashed it around the world, like the Brits and the French before them and so on and so on. Our government deserves every insult hurled at it.

But at the same time, there is always that opportunity for real change when that moment of enlightenment occurs and we stop denying our baser selves and become whole.

And we can do that as long as we keep our heads high, our hearts open and focus true.

There are truly evil people acting out their plans today. The Flying Monkeys are in charge in our Post-Dorothy Oz.

In our Post-Dorothy Oz, where the witch is dead and the Wizard unmasked, the Flying Monkeys are left leaderless and they’ve been successful in their raiding the countryside for their own benefit that absent the meta-stable leadership of the Tyrant overlord, they believe they can run their own operations.

It’s clear that… the Flying Monkeys believe they can manipulate a hapless President to achieve their personal political agendas and not have them blow up in their faces.

… Given the structure of D.C. for so long, Presidents, at best have been allowed to lead the squadrons of Flying Monkeys but they don’t actually set policy.

That’s the Witch’s job. But, the problem is that The Witch is Dead and she won’t be resurrected. Because the Witch wasn’t any one person, the Witch was our willingness to accept the lies of our political system as constructive to our future.

That perception is a puddle of goo stinking up the room.

They are making demands like demented lunatics and sadly too many think they are right because things have been so unfair for so long.

They want us yelling at each other, not talking to each other.

Everywhere that chaos reigned the net result was never what was written in the operations manual.

Iraq was never pacified, Afghanistan is still unruly, the Donbass is still free, Iran refuses to be toppled, Russia is resilient and potentially resurgent, Venezuela will survive, Syria is rebuilding and China will be taking over Hong Kong.

The death toll is horrific, the human price paid incalculable. The U.S.’s adversaries have pleaded with it for years to back away gracefully, but Empires don’t bargain, they dictate.

And with that realization comes asking the question of who we are going to be?

But that’s for us to figure out, not for you to gloat over.

Because no one will be spared the chaos of a disorderly breakdown of the U.S. That’s not a threat, that’s reality. So, again I won’t be cheering when Antifa in all its guises comes to Toronto or Berlin, Sydney or London.

And I won’t be saying I told you so.

Because, just like in those places the U.S. has destroyed, those trying to destroy the U.S. will find it a lot harder to pacify than they think it will be.

Sure you can shut off the money spigots, burn businesses, pay agent provocateurs, even overthrow presidents and foment real civil wars but all you’re doing is making the next generation stronger.

All you’re doing is making sure the next empire fails.

So folks, I’m with you. I know the end of the U.S. empire is on the horizon and I’m here to do my part and help define what comes next. But I also know those making it happen and cheering it on better be careful what they wish for.

Because they just might get it, in the words of H.L. Mencken, good and hard.

Michael Snyder: If This Is What “The New Normal” Is Going to Look Like, It Is Going to Be Horrible

A Society on the Brink of Complete and Utter Chaos