Everyone with any position in today’s market will be able to say they lived through a real Bear Market.

In the echo chamber of a Bull Market, there’s always a reason to get bullish: the consumer is spending, housing is strong, the Fed has our back, multiples are expanding, earnings are higher, stock buybacks will push valuations up, and so on, in an essentially endless parade of self-referential reasons to buy, buy, buy and ride the rocketship higher.

The classic Bull Market reason to get extremely bullish is, yes, bearish sentiment: sentiment is terrible, and bearish sentiment is the surefire marker of a stock market bottom. The more bearish the sentiment, the more reasons to get bullish and start buying with abandon: max out the margin account, hock the farm, empty the kids’ college savings, whatever you need to do but dang it, dump every cent you have into stocks when sentiment gets bearish.

Since only those of us with gray hair have actually lived through a real Bear Market, younger participants cannot imagine sentiment is bearish because conditions are bearish. The last real Bear Market was in the 1970s and early 1980s, about years ago. By “real” I mean deep, enduring and pervasive.

Each of the recessions / Bear Markets since 1982 have been relatively brief and in the downturns of 2000-02 and 2008-09, the result of extreme excesses in specific financial sectors of the economy: the tech sector in the dot-com bubble-burst and subprime mortgages in the housing bubble burst.

If you didn’t work in the tech sector or speculate in tech stocks, the 2000-02 downturn wasn’t that wrenching or pervasive. The 2008-09 Global Financial Meltdown affected more people because it deflated the core asset of household wealth, the home, and toppled the dominoes of banking / Wall Street’s institutionalized fraud and extreme excesses of debt and leverage.

A real Bear Market is different. It’s systemic, i.e. it can’t be reversed with “the Fed has our back” tricks; it’s pervasive, i.e. it affects every sector of the economy, and because it’s systemic, it’s enduring–it doesn’t end in a quarter or two or even a year or two.

Real Bear Markets end not when sentiment gets extremely bearish but when all the mal-investments, inefficiencies, excesses and institutionalized skims/scams are squeezed out of the system. To the degree that the status quo works tirelessly to maintain the inefficiencies, excesses and institutionalized skims/scams because they enrich insiders and elites, then the Bear Market never ends.

The Bulls have been trained by the Federal Reserve and “buy the dip” to respond with Pavlovian enthusiasm to signals such as bearish sentiment and a whole tramp steamer of other technical analysis signals: price is stretched below the 200-day moving average, this is the signal to buy, the Fed is printing trillions, you can’t lose if you buy now, etc.

It never occurs to over-anxious-to-buy Bulls that all their analogs and signal are misleading because this situation is fundamentally different. Even 1929 and the starts of the Great Depression isn’t an accurate analog, as the Roaring Twenties were just another bubble of excesses in debt, leverage and risk-taking that eventually popped.

The Great Depression was exacerbated by the collapse of small banks, which wiped out savings, and the Dust Bowl (caused in part by the plowing of huge swaths of marginal land to increase production, all of which was funded by debt that could never be paid back).

The reason why sentiment is bearish is because the situation–the popping of a vast, 20-year expansion of excessive debt, leverage, state/monopoly abuses and risk in an unprecedented Everything Bubble–is definitively bearish. Sentiment is bearish because reality is bearish, and taking that reality as a bullish signal to buy is delusional.

No, no, no, cry the Bulls: the market discounts reality, and therefore it’s time to buy, buy, buy because we’re already turning the corner. And how do we know this? Because sentiment is so bearish! This self-referential dependence on sentiment readings and signals rather than on reality is the key dynamic in delusional bullishness.

An abundance of Bulls over-anxious to “buy the dip” to catch the rocketship higher is not evidence of a bottom, it’s evidence of a top. At the bottoms of real Bear Markets, few are anxious to buy the dip because sentiment is bearish. All those who were so anxious to buy the dip based on bearish sentiment have been wiped out and are now cubby-holed somewhere, reliving past glories when they made fortunes buying the dip because the Fed has our back, sentiment was bearish and the 5-day EMA blah, blah, blah.

Case in point, every institution’s favorite stock of the past decade: Apple. Interestingly, Apple’s operating earnings have been flat for years–never mind what the global lockdown will do to aspirational longings for $1,000 smart phones.

Yet plateauing operating earnings meant nothing to Apple bulls, who doubled the stock’s value because…. another tramp steamer full of bullish hyperbole. 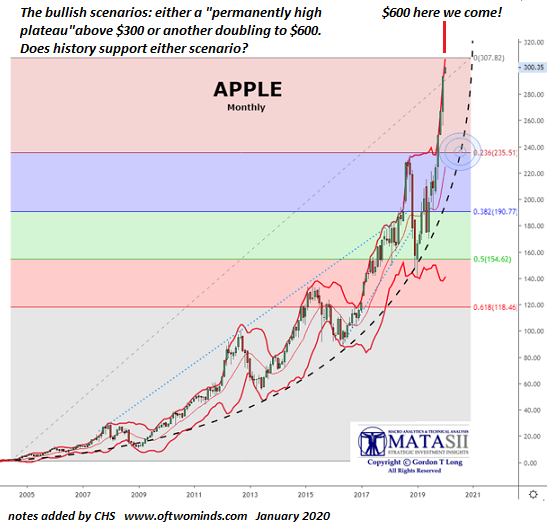 Everyone with any position in today’s market will be able to say they lived through a real Bear Market. The trick is to survive the bullish echo chamber and have some capital left to deploy when all the bulls so anxious to buy the dip will have vanished. 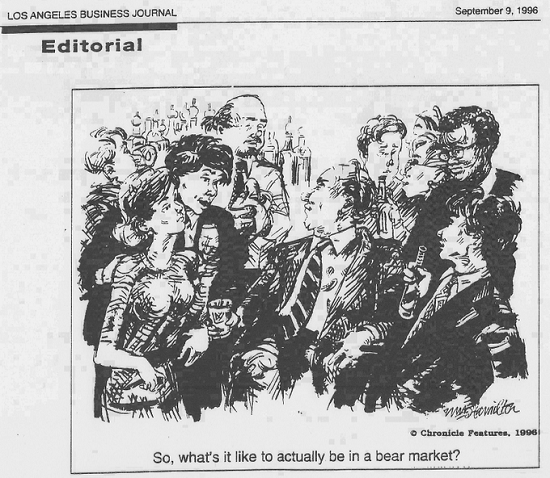 Republished by permission of the Of Two Minds website.

Three Hundred and Sixty Billion Locusts and Growing: A Plague of “Biblical Proportions” Is Destroying Crops across the Middle East and Africa

Australia, You Have Unfinished Business. It’s Time to Let Our ‘Fire People’ Care for This Land

Visualizing the Footprint of Highways in American Cities