All things considered, it seems appropriate that GQ, once the final word on male fashions, chose the Halloween season to detail the ‘new masculinity,’ which is nothing less than horrible, grotesque and, yes, even sinister.

There was a strong temptation to simply ignore the hype over GQ and its October issue, which explores the ways that “traditional notions of masculinity are being challenged.” After all, here was yet another cheap attempt to subvert men and their ‘toxic masculinity’ lest some hirsute XY chromosome carrier attempts to fix a leaking toilet, speak his mind at a meeting or even take out the leader of a nefarious terrorist group. Moreover, the issue had already been chewed over by other writers, so it didn’t seem necessary at first to add to the conversation. 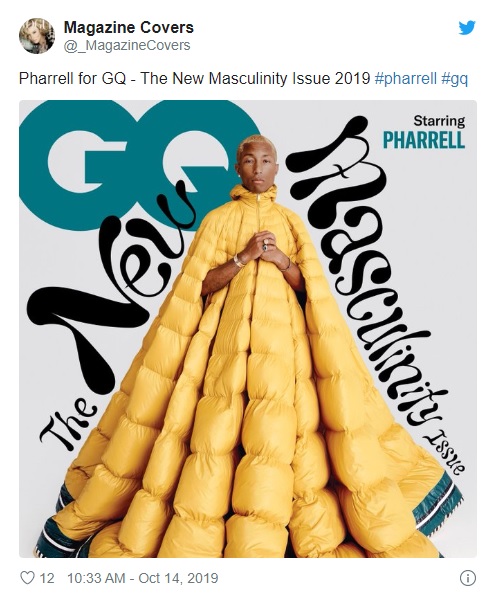 Of all the various commentary on the subject, however, none dared mention the elephant in the GQ hate piece – and make no mistake, it is hate. This is not the ongoing war against males and their so-called ‘toxic masculinity” per se, but rather the war against ‘white toxic masculinity’ and the malignancy believed to be lurking below the surface of every social ill, known as ‘white patriarchy’. In other words, there is a lot more to this PC obsession with masculinity than first meets the eye. So let’s start at the beginning.

Nevertheless, GQ editor Will Welch celebrated his joyfully “frictionless” day with Williams where the rapper opened his soul about the ‘new masculinity,’ which, in these post-MeToo times, has no safe space for White males. The conversation quickly turned to transgender lifestyles and the villainous white patriarchy that apparently is to blame for things being so out of whack in the world today.

“On the surface, it is an older-straight-white-male world,” Williams complained. “But it has prompted this [transgender] conversation that I think is deeper than what the new masculinity is or what a non-gender-binary world looks like.

“I think we’re in spiritual warfare.”

Almost imperceptibly, GQ has already made the sleight of hand from ‘white patriarchy to toxic masculinity to transgender lifestyle.’

Had Welch just stopped the conversation at the esteemed Mr. Williams, perhaps we could just let this ‘new masculinity’ magazine slip harmlessly into the dust-bin of obscurity. But alas, GQ does not stop at the glorified rapper, but goes on to pick the brains of 18 “influential people who are shaping our culture now.” Since we are talking about GQ (of former ‘Gentlemen’s Quarterly’ fame) it might be assumed that mostly rugged males and perhaps one or two token females would be chosen to speak their minds on the issue of masculinity. Not in these woke times. In fact, this assembled confab would have trouble putting together a single XY chromosome among them.

This diverse and very colorful group that apparently knows so much about masculinity is comprised of nine feminists, one transgender male (that is, a biological female), three homosexual men, and three men who are in heterosexual relationships, none of whom, by the way, are representative of the white Caucasian race. The lone ‘rugged male’ among the pack, white NBA star Kevin Love, is unmarried and childless. Love devoted the bulk of his interview to explaining why men are “supposed to be emotional,” which may go far at explaining his present bachelor status. 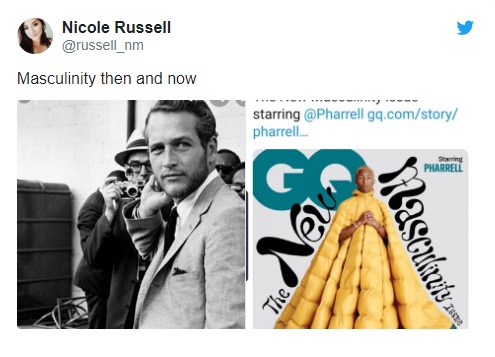 The advice proffered by this collection of voices is so incredibly discordant I would suggest the reader take the time to examine them individually, painful as that may be. Personally, two particular comments really left an impression and revealed the real agenda at play here. All this talk about ‘toxic masculinity’ is in fact aimed at ‘white toxic masculinity’ and the white male population in general. This is revealed first of all by the demographic makeup of the cast of characters, of which there are only two white males, the one being homosexual, the other an emotional bachelor. Needless to say, that is not a fair representation of the US demographics with regards to straight white males, which (still) make up the overwhelming majority of the American male population.

Furthermore, the term ‘white’ is bantered about with disdain so deep you’d think the subject were climate change or male pattern baldness. In fact, I’d go so far as to call it hate. For example, Asia Kate Dillon, introduced heroically as the “actor who brought gender nonconformity to America’s living rooms,” spoke about how she carries “white-body privilege” as if she were speaking about the Bubonic plague.

Next, in its interview with rapper ‘Killer Mike,’ GQ asks about his “weapon of choice to fight white patriarchy?” Hold on, Mr. Welch. I thought this was supposed to be an expose on the ‘new masculinity.’ So why has this conversation veered off the road into a bigoted discussion on race, specifically white race?

Later, Hannah Gadsby, the “comic who’s taking on toxic masculinity,” explains with all the dead humor she can muster, that “this is the first time that straight white cis men have been forced to think of themselves as anything other than human neutral,” which makes zero sense, thus explaining why nobody thought to broach the topic before.

In any case, the underlying message here is that it is not so much ‘masculinity’ that is toxic and worthy of extermination, but rather ‘white masculinity’ and, as the article screams between and in the lines, ‘white patriarchy.’ Why is there no negative singling out of the Black Americans, for example, or Muslim men in this discussion on ‘toxic masculinity’? Are we to assume that only white masculinity is infected with toxicity? The rampant violence in America’s inner cities, as well as abroad in European capitals that welcomed millions of Middle Eastern refugees, should warn us against jumping to such radical, unfounded conclusions. White Europeans have been guilty of historical crimes, but certainly no less than any other race of peoples. Yet American liberals are determined to change that historic record, for what ulterior motive I have no idea.

Yet nowhere is common sense being applied when discussing ‘toxic masculinity’ and ‘white patriarchy,’ which are now being used recklessly in the same sentence in a cause and effect relationship. That is a very dangerous and shortsighted assessment of the social, cultural and political realities facing Western civilization. We embrace it at the risk of total societal collapse.

Robert Bridge is an American writer and journalist.

Link to the original article: https://www.strategic-culture.org/news/2019/10/31/crimes-of-fashion-gq-magazine-goes-on-offensive-against-white-toxic-masculinity/