The mockery of justice that is the criminal case against the Center For Medical Progress continues.

Thomas More Society, the group defending Daleiden, announced the ruling in a tweet on Friday:

In spite of the insanity that this obviously retaliatory case is even moving forward, Daleiden expressed optimism and tweeted that the case, helped along by Sen. Kamala Harris, is “falling apart”: 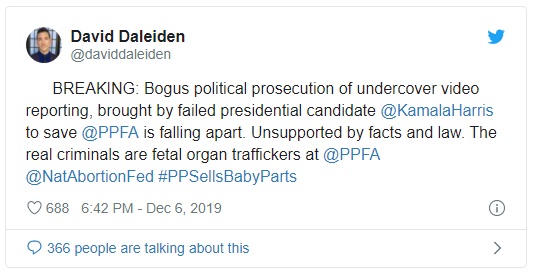 “Former California Attorney General Kamala Harris concocted this bogus, biased prosecution with her Planned Parenthood backers against undercover video recording, and now their case is falling apart as the facts about Planned Parenthood’s criminal organ trafficking are revealed in the courtroom,” Daleiden said in another statement.

“The remaining charges under the California video recording law—the first and only time it has ever been used against undercover news gatherers—will fall for the same reasons that five charges were dismissed today: these were public conversations easily overheard by third parties. The real criminals are the Planned Parenthood leadership who sold fetal-body parts from late-term abortions and weaponized the justice system to try to cover it up.” 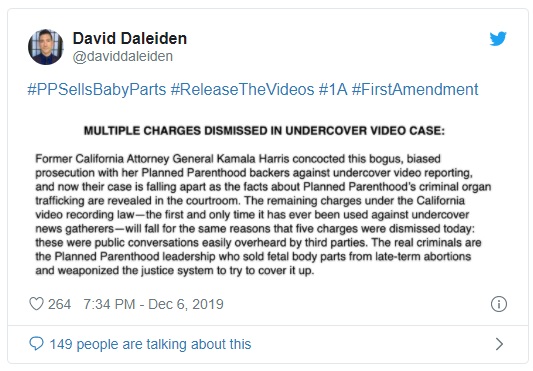 According to LifeSiteNews, Daleiden and Merritt are scheduled to appear at California’s Superior Court for instruction and arraignment on January 30.

In a separate, civil case, a jury ruled in mid-November that Daleiden, Merritt, Albin Rhomberg, and Troy Newman of Operation Rescue must pay Planned Parenthood a total of $2.3 million in compensatory and punitive damages and legal fees for secretly recording abortion industry conferences in 2014 and 2015. CMP and Operation Rescue are currently appealing this ruling.

As we’ve stated several times before, the civil and criminal cases against Daleiden and Merritt are simply astounding.

It is beyond comprehension that investigative journalists are subject to this kind of abuse. While Planned Parenthood staff continue to freely break federal laws prohibiting the trafficking of aborted fetal body parts, anti-eavesdropping laws are being abused to punish CMP and compel its journalists to pay obscene amounts of money to the abortion giant.

“Today’s ruling proves unfounded and outrageous charges against two pro-life journalists who exposed the harvesting and trafficking of innocent babies. This is a gross abuse of power and a violation of the First Amendment,” Rose wrote.

“Animal activist groups went undercover at a duck farm & former CA AG @KamalaHarris used their expose to try to ban foie gras,” she added, pointing out the glaring double standards in the application of the law. “But when pro-life reporters exposed @PPFA execs haggling over baby parts, the reporters were prosecuted & the abortionists protected.” 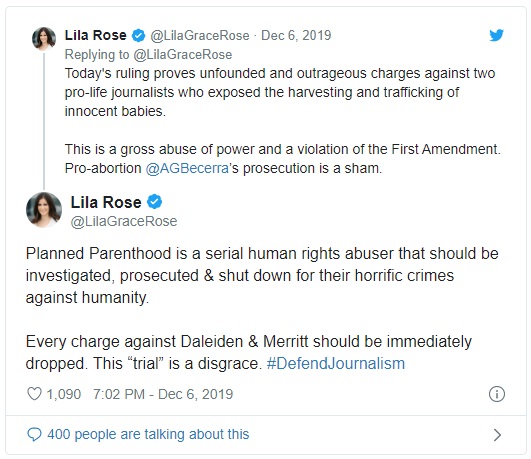 In any sane and rational world, Daleiden and Merritt would be protected as journalists and thanked for their boldness in uncovering Planned Parenthood’s unspeakable evil.

However, the pair had the great misfortune of committing their “crimes” in the leftist dystopia of California within the jurisdiction then-Attorney General Kamala Harris.

Harris’ successor, Democrat Attorney General Xavier Beccera announced the charges against Daleiden and Merritt at a press conference in March 2017. To date, however, both Beccera and Harris have failed to note their own personal ties to the abortion industry.

According to a statement from Daleiden at the time, documents from the case now on public record show Harris “had an in-person meeting at the attorney general’s meeting in Los Angeles with no less than six top-level Planned Parenthood of California executives.”

“We have the minutes in an email from the meeting that Kamala had with the Planned Parenthood leadership,” Daleiden added, “and in that meeting they discussed both Planned Parenthood’s political agenda in the state of California, and they also discussed the attorney general’s investigation of me and of CMP.”

Electromagnetic Radiation Due to Cellular, Wi-Fi and Bluetooth Technologies: How Safe Are We?

President Trump’s Dual Coronavirus Focus Is on the Mark: Opinion

US Coronavirus Cases Double in Less Than 48 Hours, and “Everyone Else Will Be Italy in 9-14 Days’ Time”

The U.S. Military’s Dealing with the Virus. (But Keep It a Secret.)

Patrick Hill: Will the Coronavirus Trigger a Recession?