If several weeks of state-imposed house arrest and unemployment have maxed out your stress level, wait until you hear what the experts have in mind to “mitigate” a bad seasonal influenza.

Here is Dr. Ezekiel Emanuel, brother of Rahm, the former mayor Chicago and a Clintonite:

Realistically, COVID-19 will be here for the next 18 months or more. We will not be able to return to normalcy until we find a vaccine or effective medications,” e said. “I know that’s dreadful news to hear. How are people supposed to find work if this goes on in some form for a year and a half? Is all that economic pain worth trying to stop COVID-19? The truth is we have no choice.

You may remember Mr. Emanuel. He’s a “bioethicist” in favor of so-called death panels. He advocated denying medical assistance to old folks who are not “participating citizens,” that is to say sickly retired elders no longer working and paying mandatory financial tribute to the state and its corporate owners.

It probably shouldn’t be surprising a guy who believes dementia and elderly cancer patients must be left to die advocates a year and a half of a freeze-frame economy that will ultimately kill thousands, far more than a seasonal coronavirus. 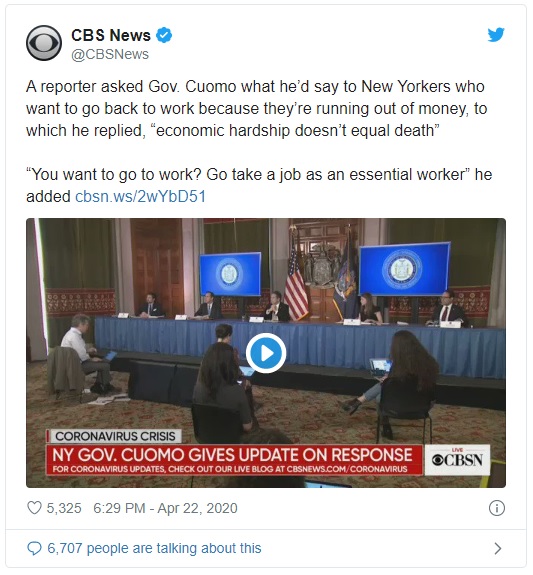 This sort of contempt for the folks who pay Cuomo’s handsome salary is a common trait shared by psychopathic control freaks. It’s fair to say the gov doesn’t really care about New Yorkers who will end up destitute. He is solely focused on what appears to be a nasty influenza and an endless iron-fisted lockdown, never mind the death toll from a nearly moribund economy will far outpace anything produced by COVID-19 (or any other virus).

The political class and technocrats like Ezekiel Emanuel still have time to build fortresses between themselves and an outraged and violent hoi polloi. Maybe that’s why the National Guard and Army have been mobilized. In six months, will every American know who Gen. Terrence J. O’Shaughnessy is?

“Pandemic Proportions”: COVID-19 Is Starting to Spiral out of Control all over the Globe

Contact Tracing: Your Governors, Red or Blue, Are Coming After You

Michael Snyder: Japan’s GDP Is Collapsing and Experts Are Warning that China Will Be Next