The pension system in the United States isn’t healthy by any stretch of the imagination. It has been underfunded for quite some time.

The newest pension system “report card” was released in June this year. It reveals the latest official data (as of 2017), and shows that things aren’t much better since the previous version we reported on back in January: 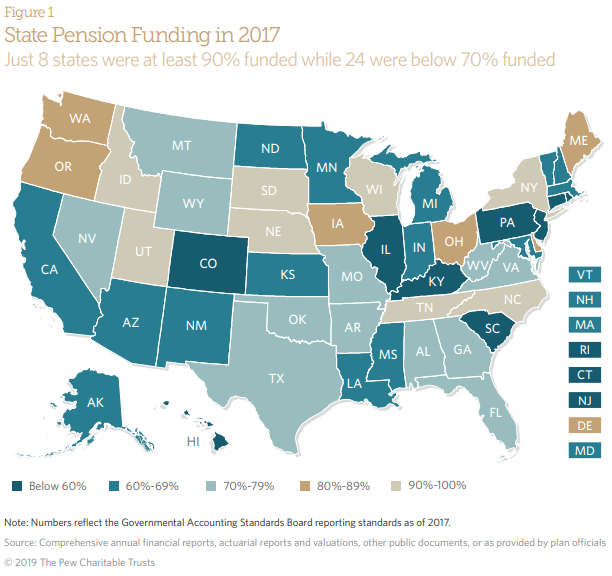 When comparing the funding ratios of the top three state pension programs to the bottom three, things get even more disturbing.

According to the latest report, the top three programs (South Dakota, Tennessee, and Wisconsin) remain virtually unchanged since 2013, hovering around 100%.

A disturbing fact about the three worst funded state pensions is that they have been receiving more money, yet are more underfunded. According to the report, these states “had an average employer contribution rate of more than 31 percent of payroll in 2017—a 22 percentage point increase since 2007.”

Even more disturbing, the majority of all 50 states resemble the worst-funded:

For example, only eight states were at least 90 percent funded in 2017, while 20 states were less than two-thirds funded.

Overall, the entire system is suffering from a widening “trillion dollar gap between their liabilities and their assets,” according to ZeroHedge.

But if that weren’t bad enough, talk of a taxpayer-funded federal bailout is beginning to surface as a potential way out of this mess.

The Potential Solution May Be a Taxpayer-Funded Nightmare

Marc Levine, the former chairman of the Illinois Board of Investment, is famous for deploying the strategy of firing hedge funds and managers to close the funding gap.

Illinois is ironically one of the bottom three state-funded pensions, but nonetheless, Levine offered the radical idea of a federal bailout:

The idea of another taxpayer-funded pension bailout isn’t likely to sit well with Americans who are already having a challenging time saving for retirement in the first place.

The U.S. government already tried that after the 2008 recession, and the jury is still out as to whether or not it created a “permanent bailout state.”

According to a Rolling Stone piece by Matt Taibbi, with that bailout lawmakers may have fueled a perpetual nightmare:

What we actually ended up doing was the exact opposite: committing American taxpayers to permanent, blind support of an ungovernable, unregulatable, hyperconcentrated new financial system that exacerbates the greed and inequality that caused the crash, and forces Wall Street banks like Goldman Sachs and Citigroup to increase risk rather than reduce it.

So “buyer beware” if these shenanigans are proposed as a way to save an already crumbling pension system.

Make Sure Your Retirement Doesn’t Need a Bailout

Even if it turns out pensions don’t get bailed out by taxpayers this time, the possibility looms that state governments may attempt extreme measures to recover losses and make up pension funding gaps.

You don’t want your savings to be confiscated by some desperate lawmaker’s plan. So start examining ways to protect your financial future.

Physical assets such as gold and silver are known for their growth potential and security during times when lawmakers can’t make up their minds about how to fix pensions.

Why Are Stocks Roaring Higher? Central Banks Just Printed the GDP of Japan in Two Months

All of the World’s Money and Markets in One Visualization

Egon von Greyerz: US Gold Confiscation Would Be Folly

All the World’s Metals and Minerals in One Visualisation

Lance Roberts: You Were Warned of the Risk