The airline industry is a tough business. Profit margins are narrow, airplanes are expensive to run and maintain, and government regulation and taxation can be onerous and unpredictable.

In addition, demand can stall by the outbreak of disease, recession, war, or terrorism. So when a company has a winning airline route, it makes all the difference to a company’s bottom line.

Today’s visualization uses data from OAG Aviation Worldwide, which tracked the airline routes that generated the most revenue from April 2018 to March 2019. 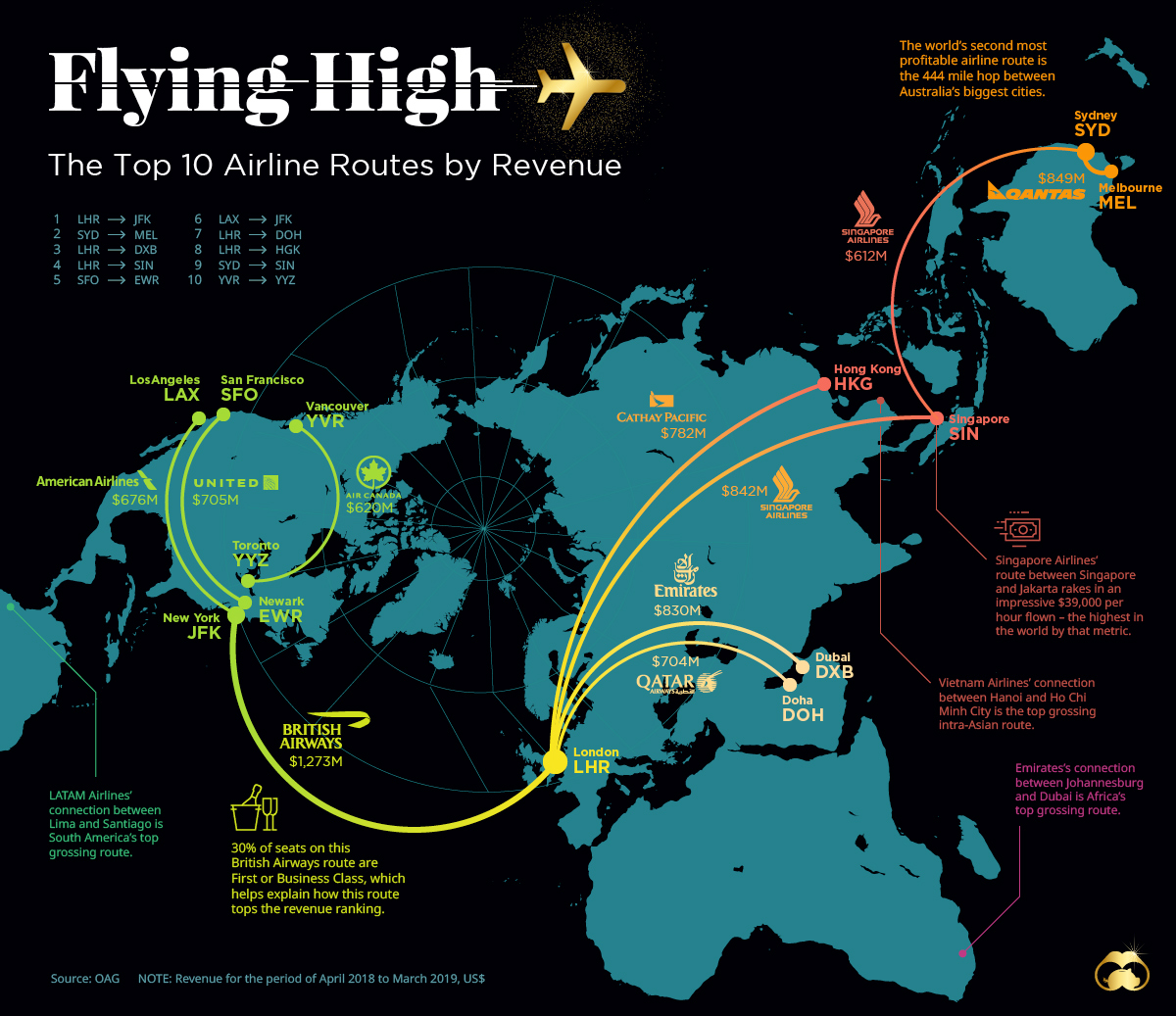 North American routes dominate the global rankings. However, it is the connections from the U.S Northeast and Europe that generate the most revenue and often the most delays.

Air Canada’s route between Vancouver and Toronto bottoms out the list with $541 million of revenue in 2019. Low population density, high infrastructure costs, and an aviation industry that is essentially an oligopoly, are all factors driving up ticket costs in Canada.

Here’s a look at only the top-grossing routes connected to North America, including the prior ones that made the global list.

Transcontinental routes dominate the domestic market with LAX–JFK appearing twice in the ranking for both American and Delta Air Lines.

Despite Asia’s rise as an economic superpower, there are no routes that break the billion dollar barrier. Singapore Airlines’ Singapore (SIN) to London’s Heathrow (LHR) tops the list, generating $736 million in 2019.

At the top of the ranking in Africa is Johannesburg (JNB) to Dubai International Airport (DXB) with revenues of $315 million. Dubai has become an important hub for high value flights arriving and departing Africa, a position that may prove profitable as air traffic on the continent increases in coming years.

Despite the smaller earnings compared to larger markets, some airline companies see the potential for growth in Africa. Virgin Atlantic will fly a route between London’s Heathrow and Cape Town in South Africa, while Qatar Airlines acquired a stake in RwandAir.

The cities that appear in the top revenue ranking are revealing. Since business and first class travelers are such an important revenue driver, it makes sense that connections between the world’s financial hubs are delivering big value to airlines.

As Asian and African economies continue to evolve, what route could be the next billion dollar route for airlines?

America Is Now the COVID-19 Epicenter: The US Just Had 17,224 Newly Confirmed Coronavirus Cases in a Single Day!

No American Will Be Spared from Impending Public Pension Bailouts

How Long Until The Fed is Forced to Intervene Again?

The Fed is Now an Extension of the Trump White House