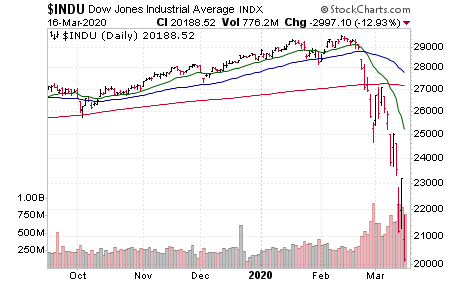 Of course all of this volatility is being driven by fear of the coronavirus.  Even though fewer than 100 Americans have died so far, investors are completely freaking out.

So what will happen if thousands or even millions of us start dying?

On a percentage basis, the nightmare that we watched unfold on Monday was the worst day for stocks since “Black Monday” in 1987…

Stocks fell sharply Monday — with the Dow suffering its worst day since the “Black Monday” market crash in 1987 and its third-worst day ever — even after the Federal Reserve embarked on a massive monetary stimulus campaign to curb slower economic growth amid the coronavirus outbreak.

Overall, the Dow is now down more than 31 percent from the all-time high set earlier this year.

If you can believe it, all of the tremendous stock market gains that we have witnessed over the last three years have been completely wiped out in just 18 trading days.

Remember, those are not figures for the entire year.

Those are figures for one day.

Of course the utter carnage was not just limited to stocks.  The following is how Zero Hedge summarized some of the other losses that we witnessed…

The good news is that there is often a hefty rebound after a historic decline of this magnitude.  It appears that stock prices will likely shoot back up a good bit on Tuesday, and that will temporarily soothe a lot of frazzled nerves.

But this coronavirus pandemic is not going away any time soon.  Over the past couple of days, restaurants and bars have been shut down across the nation, schools have been shuttered for the foreseeable future, and it has been announced that the entire city of San Francisco will be locked down.

As virtually all forms of activity come to a standstill all over America, our economic numbers are going to absolutely collapse.

In fact, on Monday we got a sneak preview of what is coming…

The New York Fed’s Empire State business conditions index plunged a record 34.4 points to -21.5 in March, the regional Fed bank said Monday. Economists had expected a reading of 4.8, according to a survey by Econoday. This is the lowest level since the financial crisis in 2009.

As we plunge into a truly horrifying economic downturn, businesses all over the country are already crying out for bailouts.

We are now being told that many airlines could be bankrupt by May, and a 50 billion dollar aid package for the industry has already been requested…

US airlines slammed by the coronavirus are requesting an aid package from the federal government that could amount to about $50 billion, according to industry group Airlines for America.

The requested aid would be in the form of loans, grants and tax relief. The airlines are looking for up to $25 billion in grants for passenger air carriers and $4 billion in grants to cargo carriers, and the same amounts in loans or loan guarantees, Airlines for America outlined in a briefing document.

Meanwhile, thousands upon thousands of ordinary U.S. citizens are already losing their jobs.  For example, just check out what is currently transpiring in New York…

New York’s unemployment website was overwhelmed Monday as the coronavirus pandemic put tens of thousands of people across the state out of work.

A drastic move by Gov. Cuomo to close all of the state’s restaurants, bars, movie theaters, gyms and casinos by 8 p.m. Monday to contain the outbreak had suddenly jobless workers flooding the Department of Labor with applications for unemployment benefits.

This will soon be happening all over the nation.

So how many jobs could ultimately be lost if this pandemic stretches on for quite a while?

According to Moody’s Analytics, millions of jobs are potentially at risk…

That doesn’t mean that all those jobs will be lost. But it’s probable that as many as 10 million of those workers could see some impact to their paychecks — either layoffs, furloughs, fewer hours or wage cuts, said Mark Zandi, chief economist at Moody’s Analytics.

Needless to say, there is going to be enormous pressure for the federal government to “do something”, and U.S. Senator Mitt Romney has “joined a growing chorus of liberal and conservative economists” in calling for $1,000 to be given to every adult in America…

On Monday, Sen. Mitt Romney (R-Utah) joined a growing chorus of liberal and conservative economists are lining up behind a proposal published in the Wall Street Journal by Harvard professor Jason Furman, who chaired the Council of Economic Advisers (CEA) under President Obama, that calls for direct government payments of $1,000 to every American adult.

We could all use some extra cash.

Of course once this sort of thing starts happening, it won’t be too long before a loaf of bread costs ten dollars and a gallon of milk costs 20 dollars.

Flooding the system with money at a time when economic activity is contracting very sharply will inevitably cause very painful inflation.

Unfortunately, at a moment like this short-term considerations are all that policy makers are really concerned about, and the American people will be demanding “relief”.

So we should fully expect lots of free money to be thrown around.  In fact, Seattle Mayor Jenny Durkan announced on Monday that her city will provide “$5 million in grocery vouchers to help families impacted by the COVID-19 pandemic”.

But I must once again stress the fact that less than 100 Americans have died during this pandemic so far.

If things are getting this crazy already, what is our society going to look like a few months down the road?

According to the New York Times, nearly 7 million Americans could die in a “worst-case scenario”…

But as a graphic from The New York Times shows, things could be much bleaker should overall infection rates and fatality rates rise.

In the worst-case scenario 6.99 million Americans would die from coronavirus – 2.74 million of them being those aged 80 and above.

We are just in the very early chapters of this “perfect storm”, and what we have experienced so far is nothing compared to what is coming.

If we can’t even handle the leading edge of this storm, what are we going to do when it really starts raging?

About the Author: I am a voice crying out for change in a society that generally seems content to stay asleep. My name is Michael Snyder and I am the publisher of The Economic Collapse Blog, End Of The American Dream and The Most Important News, and the articles that I publish on those sites are republished on dozens of other prominent websites all over the globe. I have written four books that are available on Amazon.com including The Beginning Of The End, Get Prepared Now, and Living A Life That Really Matters. (#CommissionsEarned) By purchasing those books you help to support my work. I always freely and happily allow others to republish my articles on their own websites, but due to government regulations I need those that republish my articles to include this “About the Author” section with each article. In order to comply with those government regulations, I need to tell you that the controversial opinions in this article are mine alone and do not necessarily reflect the views of the websites where my work is republished. This article may contain opinions on political matters, but it is not intended to promote the candidacy of any particular political candidate. The material contained in this article is for general information purposes only, and readers should consult licensed professionals before making any legal, business, financial or health decisions. Those responding to this article by making comments are solely responsible for their viewpoints, and those viewpoints do not necessarily represent the viewpoints of Michael Snyder or the operators of the websites where my work is republished. I encourage you to follow me on social media on Facebook and Twitter, and any way that you can share these articles with others is a great help.

On Second Level Thinking and the Coming Inflationary Storm