General Qassem Soleimani was killed in a US air strike on his car as it was leaving Baghdad Airport on 3 January 2020. Aside from the Ayatollah himself, no figure in Iran enjoyed greater renown and prominence.

On 1 January 2020, there was a fateful exchange between President Trump and Ayatollah Khamenei, in which Trump warned that Iran would pay a “BIG PRICE” to which Khamenei responded, “You can’t do anything!”

In response, Ayatollah Khamenei responded “You can’t do anything”, a jibe that will almost certainly have piqued President Trump’s ire. It is possible that Iranian officials aware of the Ayatollah’s communication to President Trump will come to see it as a mistake to provoke him. 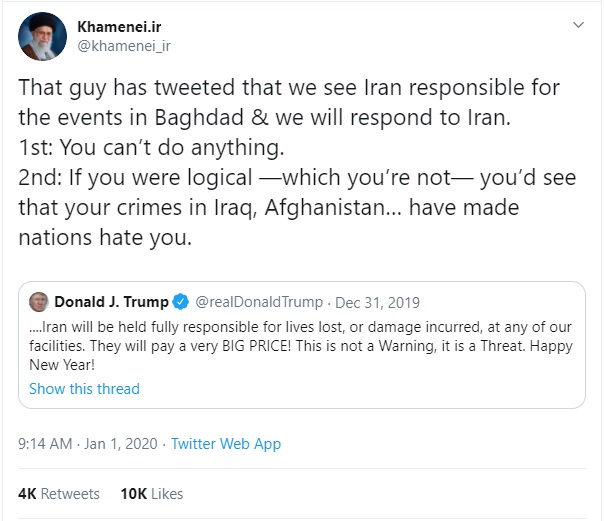 Over a forty year career, General Suleimani has worked to increase Iran’s influence throughout the Middle East, working through Shiite militias and overseas proxies, many of whom receive their orders from him. He was a highly-regarded battlefield tactician and played a major effort in supporting Bashar al-Assad in the Syrian Civil War.

Around 2014, the Iranian Government began to build General Suleimani up with the launch of an intensive public relations initiative showing him fighting in the Syrian Civil War. He was seen by many as playing an influential role in defeating Islamic State in Iraq, but was criticised by some for seeking to increase Iran’s regional dominance.

A statement from the Prime Minister of Iraq, Adil Abdul-Mahdi al-Muntafiki, condemned the attacks, decrying it as an attack on Iraqi sovereignty, and announced the recall of the Iraqi Parliament:

We condemn in the strongest terms the assassination by US forces of Iraqi and Iranian figures who were symbols of the victory against Daesh. The assassination of an Iraqi military commander holding an official position is an act of aggression against Iraq, and the Iraqi people.

Carrying out operations to assassinate Iraqi figures and figures from another country on Iraqi soil is a flagrant violation of Iraqi sovereignty and a dangerous escalation.

The assassinations violate the conditions governing the presence of US forces in Iraq whose role is to train Iraqi forces and assist in the fight against Daesh as part of the Global Coalition, subject to the supervision and approval of the Iraqi Government.

We have today requested that the Council of Representatives (Parliament) holds an emergency session to take the appropriate legislative measures in a manner that preserves the dignity, security and sovereignty of Iraq.

Official Reaction from the United States

The President of the United States on Twitter made the following statement regarding Soleimani’s death:

General Qassem Soleimani has killed or badly wounded thousands of Americans over an extended period of time, and was plotting to kill many more…but got caught! He was directly and indirectly responsible for the death of millions of people, including the recent large number of PROTESTERS killed in Iran itself. While Iran will never be able to properly admit it, Soleimani was both hated and feared within the country. They are not nearly as saddened as the leaders will let the outside world believe. He should have been taken out many years ago!

The US Department of Defense released the following statement shortly after the air strike:

At the direction of the President, the U.S. military has taken decisive defensive action to protect U.S. personnel abroad by killing Qasem Soleimani, the head of the Islamic Revolutionary Guard Corps-Quds Force, a U.S.-designated Foreign Terrorist Organization.

General Soleimani was actively developing plans to attack American diplomats and service members in Iraq and throughout the region. General Soleimani and his Quds Force were responsible for the deaths of hundreds of American and coalition service members and the wounding of thousands more. He had orchestrated attacks on coalition bases in Iraq over the last several months – including the attack on December 27th – culminating in the death and wounding of additional American and Iraqi personnel. General Soleimani also approved the attacks on the U.S. Embassy in Baghdad that took place this week.

This strike was aimed at deterring future Iranian attack plans. The United States will continue to take all necessary action to protect our people and our interests wherever they are around the world.

In an appearance on Fox & Friends, Secretary Pompeo stated that General Soleimani was orchestrating an imminent attack on US troops.

President Trump made the decision. A serious decision, which was necessary. There was an imminent attack. The orchestrater, the primary motivator for the attack was Qasem Soleimani. [We] attempted to disrupt that plot.

You all have been talking this morning about the history of who Qasem Soleimani is. He’s got hundreds of American life, blood on his hands. But what was sitting before us was his travels throughout the region, his efforts to make a significant strike against Americans. There would have been made Muslims killed, Iraqis, people in other countries as well.

You can watch the full interview below:

There were multiple reported reactions by senior Iranian figures.

In a series of five tweets, Ayatollah Khamenei expressed his anger at the death of Soleimani, and confidence in ultimate victory:

Years of sincere, brave efforts fighting against the devils & villainous in the world & yrs of wishing for martyrdom on the path of God finally took the dear Commander of Islam, Soleimani, to this lofty status. His blood was shed by the most barbaric of men.

We congratulate Imam Mahdi (‘a.j.) & Soleimani’s pure soul& condole the Iranian nation on this great martyrdom. He was an eminent example of a person trained in Islam. He spent all his life in struggling for God. Martyrdom was the reward for his tireless efforts over the years.

His efforts & path won’t be stopped by his martyrdom, by God’s Power, rather a #SevereRevenge awaits the criminals who have stained their hands with his & the other martyrs’ blood last night. Martyr Soleimani is an Intl figure of Resistance & all such people will seek revenge.

All friends—& enemies—know that Jihad of Resistance will continue with more motivation & definite victory awaits the fighters on this blessed path. The loss of our dear General is bitter. The continuing fight & ultimate victory will be more bitter for the murderers & criminals.

The Iranian nation will honor the memory of the noble Major-General Soleimani & the martyrs with him—particularly the great Abu Mahdi al-Muhandis— & I declare 3 days of mourning across the nation. I condole & congratulate his family.

Foreign Minister Javad Zarif reminded the US of Iran’s role in fighting Islamic State, and said that the assassination cuts against the US’s interests.

The US bears responsibility for all consequences of its rogue adventurism.

American people would one day know how many lives General Soleimani has saved – including Americans and Europeans – by defeating Daesh (ISIS) in the Middle East. Such re-election (miss)calculations will certainly lead to disaster.#Solaimani

Islamic Revolution Guards Corps (IRGC) Deputy Commander for Coordination, Brigadier General Mohammad Reza Naqdi made it clear that US bases in the Middle East were likely to be a specific target for reprisals.

Official Reaction from Other Countries

We have always recognised the aggressive threat posed by the Iranian Quds force led by Qasem Soleimani. Following his death, we urge all parties to de-escalate. Further conflict is in none of our interests.

At a briefing given by Foreign Ministry Spokesperson Geng Shuang, China indicated its disapproval of the United States’ actions, and called for restraint on all sides.

China has been closely following the relevant situation. We oppose the use of force in international relations and believe that all sides should earnestly abide by the purposes and principles of the UN Charter and the basic norms governing international relations. Iraq’s sovereignty, independence and territorial integrity must be respected, and peace and stability of the Gulf Region in the Middle East must be upheld. We urge the relevant parties, the US side in particular, to remain calm and restrained and avoid further escalating the tensions.

Following the attack, Ayatollah Khamenei announced that Soleimani would be replaced by Brigadier General Esmaeil Qa’ani.

Meanwhile, Trending Views is reporting that an additional 3500 troops will be sent to the region, in addition to the 750 troops previously announced.

Various news outlets are discussing the dangers posed by Hezballah sleeper cells. Under cross examination in the United States, arrestee Ali Kourani stated that he was recruited “to join the IJO in light of his education and residence in the United States, and in connection with efforts by the IJO to develop “sleepers” who maintained ostensibly normal lives but could be activated and tasked with conducting IJO operations”.

Picture by Sayyed Shahab-o-Din Vajedi [CC BY 4.0], via Wikimedia Commons.