Last year, Dr. Robert Epstein, although he is a Democrat, testified before Congress on the way Google manipulated voters ahead of the 2016 election “on a massive scale” in favor of Hillary Clinton.

On December 27, his wife Misti died in a horrific car crash, instantly raising questions that the nefarious crime cabal behind so many “accidental” deaths and “suicides” was indeed behind the young, beautiful woman married to the daring Dr. Epstein.

Until Sunday, however, Dr. Epstein had not himself said in so many words that there was anything suspicious about Misti’s death. Police had ruled that drugs or alcohol were not a factor after Misti Dawn Vaughn’s Ford Ranger spun out of control on a slippery road in California, veering right into the path of a tractor-trailer, Infowars notes.

“Makes you wonder” he tweeted, noting that her death came after his briefing before a group of state AGs about the power Google has to influence elections.

He recounts that one of them said to him “I think you’re going to die in an accident in a few months.” 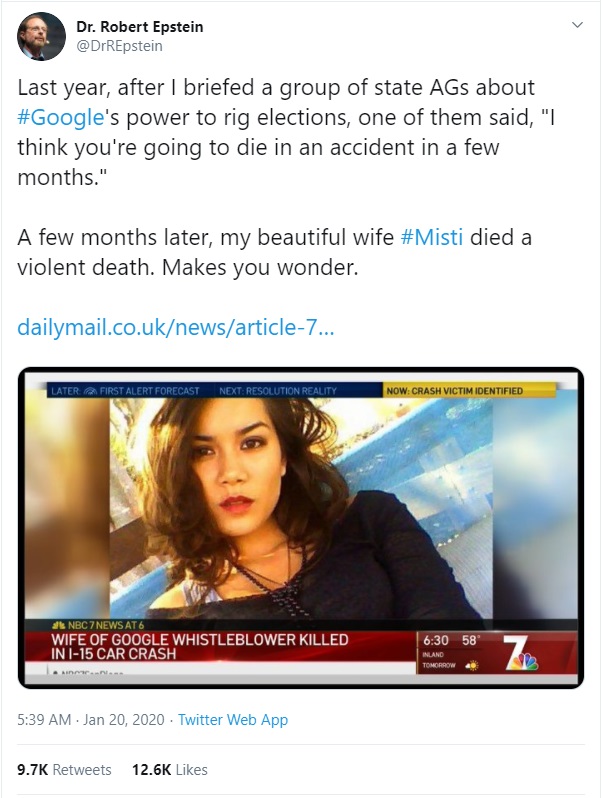 “I AM STILL NOT SUICIDAL. Hear that, Google? Hear that, Hillary?” he later tweeted. 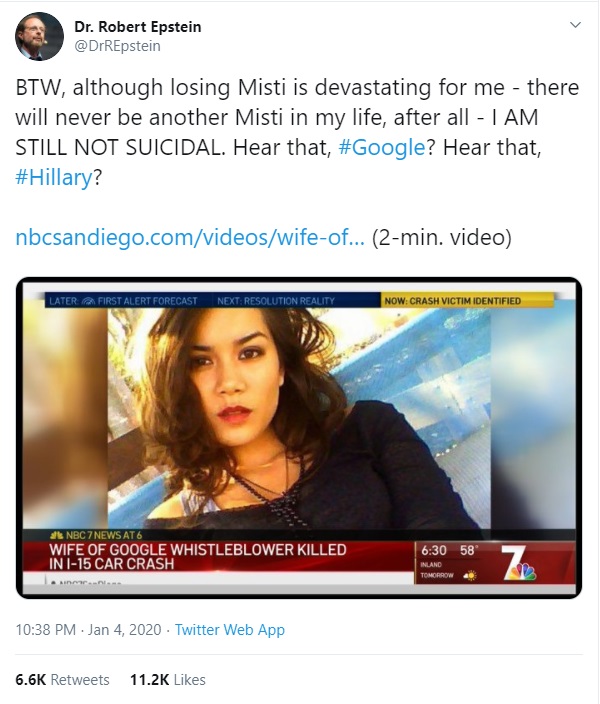 Through his exhaustive studies, Epstein has exposed how algorithm manipulation by Big Tech can shift millions of votes during elections.

Epstein has also repeatedly savaged the idea that Big Tech platforms are just “private companies” and can therefore do what they like.

“Who on Earth gave these private companies the power to make decisions about what everyone in the world is going to see or not see?” asked Epstein, adding, “These companies shouldn’t have that power, period.”

Part of his testimony stated that:

In 2016, biased search results generated by Google’s search algorithm likely impacted undecided voters in a way that gave at least 2.6 million votes to Hillary Clinton (whom I supported). I know this because I preserved more than 13,000 election-related searches conducted by a diverse group of Americans on Google, Bing, and Yahoo in the weeks leading up to the election, and Google search results – which dominate search in the U.S. and worldwide – were significantly biased in favor of Secretary Clinton in all 10 positions on the first page of search results in both blue states and red states.

We certainly make no claims to know what happened to the belated Mrs. Epstein, but it’s hard to let this story escape notice considering the track record among those who have dared to challenge the Clintons in one way or another.

Ranking The World’s Most Valuable Brands