The American Heartland continues to feed the growth of urban centers — not only with its agricultural products and natural resources, but with its people as well.

Across the nation, coastal urban centers are adding new citizens, while rural counties are seeing their populations decline. Outside of this general trend, fracking has created some rare pockets of growth in rural areas, while coal mine closures have had the opposite effect.

Today’s map comes to us from Reddit user jinkinson, and it maps U.S. population change by county from 2010 to 2018, using data from the U.S. Census Bureau. 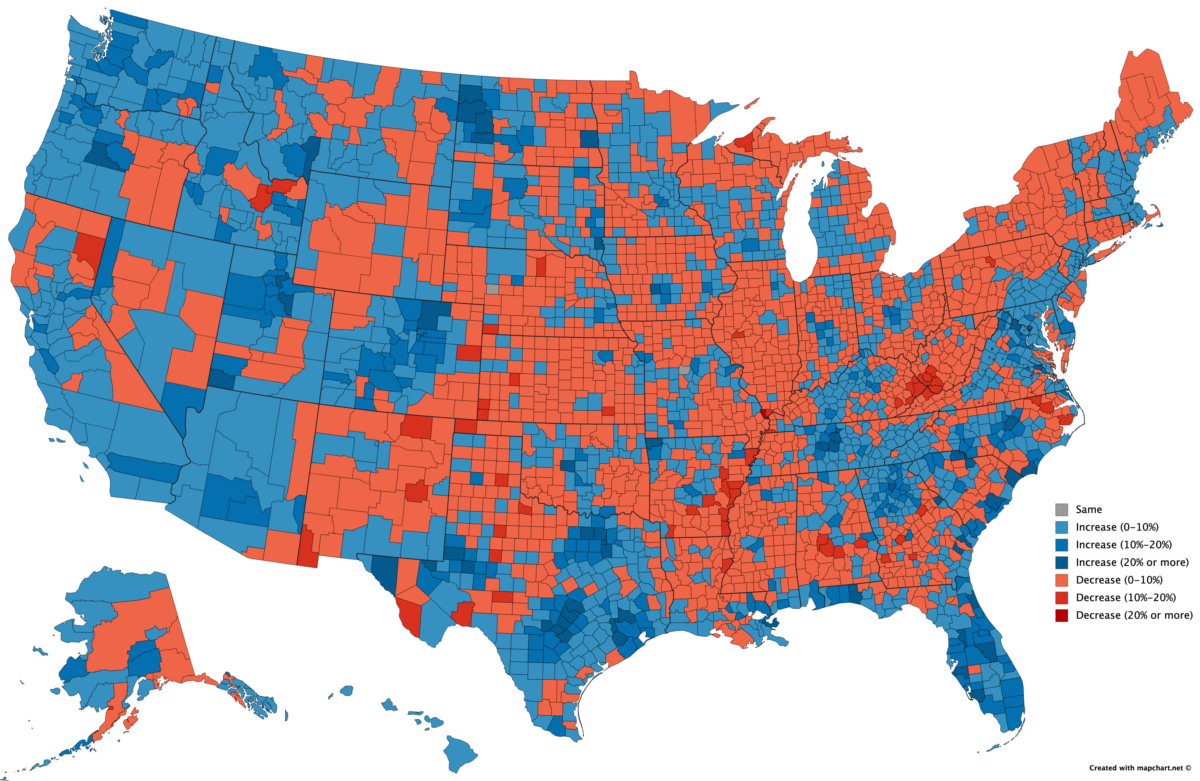 There are 3,142 counties counted as part of this map (Puerto Rico and U.S. territories excluded). Of these, 1,489 experienced positive growth, while 1,653 saw a decline.

Which Counties are Growing the Fastest?

America’s economy has grown for over a decade, but that growth increasingly concentrates in 1% of the nation’s counties.

In fact, just 31 counties were responsible for 32.3% of the U.S. gross domestic product (GDP) in 2018, according to data from the Bureau of Economic Analysis.

Although economic concentration tells part of the story, a view of changing population patterns can help us see where physical growth is happening across the country.

At the top of the list is McKenzie County, North Dakota, which experienced a growth of 114% in its population from 2010 to 2018. This is due to the shale gas industry that flourished in the area. Interestingly, all of North Dakota’s active oil and gas rigs are in just four counties: McKenzie, Dunn, Williams, and Mountrail, three of which make the top 20 list above.

The fracking boom also fueled growth in Texas, where six counties made the list.

However, immediate economic success built on fracking sands and sensitive commodity prices may not be sustainable over the longer term. In fact, counties from a previous energy era are already seeing what happens when demand dries up.

Which Counties are Declining the Fastest?

If you look at a map of coal operations in the U.S. and compare it to the list of declining counties below, a stark pattern appears.

Half of country’s coal miners work in just 25 counties, and as mines close there are fewer economic opportunities available in those areas.

While coal counties have grim figures due to the changing domestic energy story, it’s Alexander County in Illinois that tops the list with a 26% decline in population over the time period.

In fact, the harsh reality is that 93% of Illinois’ counties have seen a decrease in population between 2010-2018.

State by State: Winners and Losers

The number of declining counties within a state reveals a larger picture. Visual Capitalist aggregated county level data to reveal the patterns of U.S. states.

Illinois tops the list with the most people leaving its counties, while areas such as the District of Columbia and Delaware experienced no declines.

What happens to a state where the majority of its counties are losing residents?

Americans are seeking out opportunity where it resides: in the cities. The pursuit of fracking oil and gas created opportunities in regions beyond the coast or traditional urban centers.

However, the long term trend of concentration of people on coasts and in major urban centers will continue to impact infrastructure spending, labor mobility, and economic activity. America no longer derives the majority of its economic success from rural counties and industries.

It is unclear how rural counties will fare as their denizens continue to dwindle. What is clear is that the few that rely on natural resources for success will continue to experience the ups and downs of volatile commodity markets.

Larry C. Johnson: Benchmarks to Look For in the Horowitz Report on FISA

‘What Have You Done that the Dishonorable Shah Didn’t Do?’