On a mountaintop a few miles north of the bustling streets of Harare, Zimbabwe, a curving, modern complex is beginning to take shape. This building, once completed, will be the home of the African country’s parliament, and the centerpiece of a new section of the capital city.

Aside from the striking design, there’s another unique twist to this development — the entire $140 million project is a gift from Beijing. At first glance, gifting a country a new parliament building may seem extravagant, but the project is a tiny portion of China’s $270 billion in “diplomacy spending” since 2000.

AidData, a research lab at the W&M Global Research Institute, has compiled a massive database of Chinese-backed projects spanning from 2000–2017. In aggregate, it creates a comprehensive look at China’s efforts to grow its influence in countries around the world, particularly in Africa and South Asia.

Below, we’ll look at three diplomacy spending hotspots around the world, and learn about key Chinese-funded megaprojects, from power plants to railway systems. 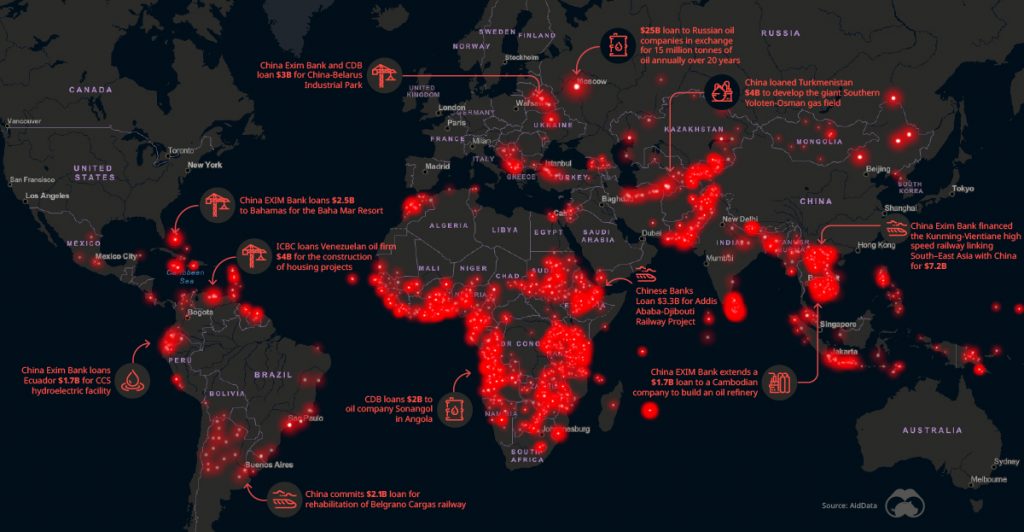 In 2015, Chinese President Xi Jingping visited Islamabad to inaugurate the China-Pakistan Economic Corridor (CPEC), kicking off a $46 billion investment that has transformed Pakistan’s transportation system and power grid. CPEC is designed to cement the strategic relationship between the two countries, and is a portion of China’s massive One Belt, One Road (OBOR) initiative.

One of the largest projects financed by China was the Karachi Nuclear Power K2/K3 project. This massive power generation project is primarily bankrolled by China’s state-owned Exim Bank which has kicked in over $6.6 billion over three phases of payments.

Billions of dollars in Chinese capital has also funded everything from highway construction to renewable energy projects across Pakistan. Pakistan’s youth unemployment rate sits as high as 40%, so jobs created by new infrastructure investments are a welcome prospect. In 2014, Pakistan had the highest public approval rating of China in the world, with nearly 80% respondents holding a favorable view of China.

Ethiopia has seen a number of changes within its borders thanks to Chinese financing. This is particularly evident in its capital, Addis Ababa, where a slew of transportation projects — from new ring roads to Sub-Saharan Africa’s first metro system — transformed the city.

One of the most striking symbols of Chinese influence in Addis Ababa is the futuristic African Union (AU) headquarters. The $200 million complex was gifted to the city by Beijing in 2012.

Though Ethiopia is a clear example of Chinese investment transforming a country’s infrastructure, a number of other African nations have experienced a similar influx of money from Beijing. This financing pipeline has increased dramatically in recent years.

In the wake of political turmoil, Sri Lanka is increasingly looking to China for loans. From 2000 to 2017, over $12 billion in loans and grants have poured into the deeply-indebted country.

Perhaps the most contentious symbol of the relationship between the two countries is a port on the south coast of the island nation, at a strategic point along one of the world’s busiest shipping lanes. The Hambantota Port project — which was completed in 2011 — followed a now familiar path. Eschewing an open bidding process, Beijing’s government financed the project and hired a state-owned firm to construct the port, primarily using Chinese workers.

By 2017, Sri Lanka’s government was burdened by debt the previous administration had taken on. After months of negotiations, the port was handed over with the land around it leased to China for 99 years. This handover was a strategic victory for China, which now has a shipping foothold within close proximity of its regional rival, India.

John Adams said infamously that a way to subjugate a country is through either the sword or debt. China has chosen the latter.

Africa’s economic rise will likely be a major contributor to global growth in coming years. Already, six of the 10 fastest growing economies in the world are located in Africa. China is also the top trading partner on the continent, with the United States sitting in third place.

OBOR spending has also earned China plenty of influence in the rest of Asia as well. If the ambitious megaproject continues along its current trajectory, China will be the central player in a more prosperous, interconnected Asia.

A New Survey Has Found the Upcoming Election Is a “Significant Source of Stress” for 56% of U.S. Adults

Iran Vows Revenge against the United States, and the Phrase “World War 3” Is Now Trending…

Alex Johnson: The Dichotomy of Experiences and Standards