For American politics, 2021 started just as well as one might expect. After a highly contentious election year, a worldwide pandemic, and months of mass riots, we have yet another fun event. The storming of the US Capitol. While most media focus on the violent actions of the mob or political grandstanding, the events that transpired afterwards are much more important for the future. Specifically, it’s the banning of a sitting US president from social media, blacklisting of Parler, and the possible end of the Internet as we know it.

The Internet, while ever-growing, is also becoming an increasingly monopolized structure. What started as a free-for-all of thousands of entities is now turning into a field dominated by a handful of giants. This doesn’t just concern the websites but also the cloud infrastructure they are based on. Moreover, the three hyper-giants – Amazon, Microsoft, and Google – use predatory tactics to assert their absolute dominance. This monopolistic dominance is not just a problem for the average consumer. Rapidly, it is also becoming a dire problem for the world of politics.

Over the last few years, there have been increasing cries from the conservative side over the continuous suppression of speech on Twitter and Facebook, with no clear standards of moderation. For example, the social media giants have recently heavily interfered in the elections by censoring the New York Post’s Hunter Biden story , which solidified the view that they use their power to support only one side of the isle. That is primarily why sites like Parler sprung up. To provide a platform for those who felt silenced. However, after the Capitol riot and banning of President Trump, Parler itself has been deplatformed by Amazon.

Since the first amendment only applies to government censorship, tech giants are ultimately free to censor whoever they want, even if it is a politically motivated, emotional reaction. However, the potential problems of having a handful of companies, mostly located in coastal United States, control what you get to see are rather obvious. Especially when they seem to be actively collaborating in their decisions to deplatform people and sites based on arbitrary rules, as well as restricting the rise of alternative platforms.

Many who applaud such moves out of political convenience, fail to understand that the Internet was created as the ultimate platform for free expression. It has since become a fundamental foundation of democracy. While we may often forget how important a free internet is, the Hong Kong Protests or the Arab Spring show us how crucial it is to save the Internet from any kind of top-down restrictions. However, while we regularly decry governmental censorship of the Internet in tyrannical regimes, we often cheer it in our own democracy. In that way it seems that while countries like China, Turkey or Russia use their governmental power to limit free speech on the Internet, the US took a different route. What they managed to do, is successfully outsource online censorship. 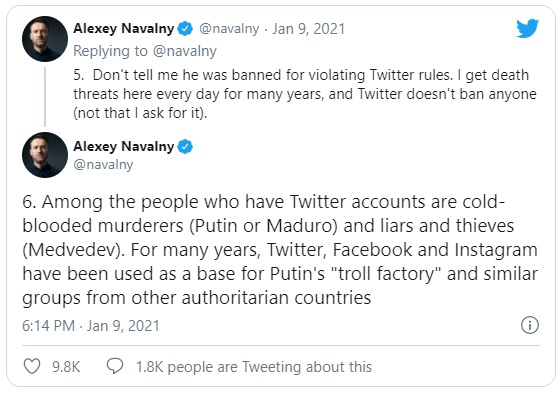 The banning itself was condemned by many prominent figures, including the German chancellor Angela Merkel or the anti-corruption advocate and chief Putin rival Alexey Navalny. With the increasing role of social media as sources of information, the unbridled power of big tech to shape narratives leads many to worry about the future of internet. While we may disagree with Trumps rhetoric, policies, or hairstyle, banning him on ideological grounds sets an incredibly dangerous precedent for the future.

What we have to understand is that the right to free speech is an absolute – it means we get to express any and all ideas and face the consequences. For Trump, the consequence was losing the 2020 elections. Decided democratically by the people, not by our corporate betters. The Capitol riots themselves happened because of the growing belief that the big tech and big government colluded to suppress the will of the people. By using them to limit his free speech, we may only embolden his most radical supporters. By removing conservative opinions, we may only drive more people to take drastic measures. By dividing opinions into separate camps and restricting discussion, we will only create more echo chambers and sow the seeds of further conflict. While the Capitol riots will become only a forgotten speck of history, the rise of online censorship has the potential to spiral into a massive conflict and the end of internet as we know it.

Igor Bubeník is an independent writer and commentator with a master’s degree in Public Policy. His main expertise is in politics and policy analysis.

This article was first published on the Jackdaw.

Kirk Durston: Why the “Universe from Nothing” Is a Non-Starter

The Coronavirus Goes to Washington D.C., and It Is Spreading Fear Like Crazy

‘How Dumb Have We Become?’ Chinese Students Are Four Grade Levels ahead of American Students in Mathematics

When Helping Hands Hurt: Exploring the Impact of NGOs on Haiti’s Path to Recovery

Robert Willmann: Large Domestic Disturbances, the US Military, and the Insurrection Act