Never underestimate the power of a people who are determined to fight for and defend their First Amendment rights.

Earlier this year, we watched in horror as seemingly millions of Christians happily allowed their churches to be shut down without a peep of complaint.

Yes, there is a lot to be said for trying to make sure your fellow parishioners are healthy and safe, particularly the vulnerable.

Yes, we are blessed to have technology that allows us to see one another and worship together from afar.

And yes, we are called to obey the government in the Bible.

However, it is on this last point that so many Christians seem to be very confused. We are to obey the government…when the government does not call on us to disobey God. Who is the higher authority, the state, or God?

Not to mention, in a republic, we are the government. They work for us. And our Founding Fathers made sure to enshrine our right to worship freely in the Bill of Rights.

Thankfully, this means we have the right to peacefully, legally, and obediently challenge any laws or regulations that infringe on this right as citizens in a republic.

And as the Thomas Moore Society just proved in Illinois, exercising our right to do so can be very fruitful. Church, wake up! We all have the tools to do this in our own states and communities.

The Daily Caller reports that Governor J.B. Pritzker of Illinois has withdrawn all restrictions on religious services amid the coronavirus pandemic after challenged by a lawsuit from the nonprofit law firm.

The Thomas More Society deemed Pritzker’s announcement as a major victory after the Democrat governor said he would lift mandates on Illinois churches which had required no more than 10 people be present at services.

“This is a total and complete victory for people of faith,”  Senior Counsel for the organization, Peter Breen, said in a statement provided to the Daily Caller News Foundation. 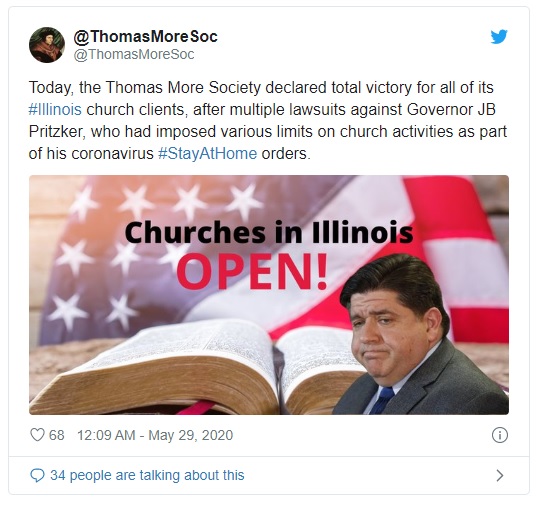 The previous mandates will be replaced with recommendations from the health department.

“This guidance does not obligate or encourage places of worship to resume in-person activity,” health officials explained, according to NBC Chicago. “Indeed, it is strongly recommended that places of worship continue to facilitate remote services, particularly for those who are vulnerable to COVID-19 including older adults and those with co-morbidities.”

This is certainly worth celebrating, but as the Liberty Counsel warned in a press release, it must not stop there.

“This is a complete victory in the near term,” they explained.

“However, unless and until there is a judicial declaration that Governor Pritzker has acted unconstitutionally thus far, there is nothing keeping him from changing his mind again, whether in this crisis or any future crisis. Governor Pritzker has shown himself quite willing to overrule the Constitution by fiat. In doing so, he has caused incalculable damage to the Romanian churches Liberty Counsel represents and all the houses of worship in the state.”

“Liberty Counsel will file a reply to the Supreme Court arguing that Gov. Prtizker’s unconstitutional orders are capable of repetition yet evading review. Also that his supposed voluntary cessation of these orders on churches does not moot the case, because as he unilaterally issued the orders and aggressively enforced them, and now repealed the church restrictions, he could just as easily reinstate them,” they added later in the release.

“He knew he did not have authority to trample on the First Amendment rights of churches and houses of worship, but he did anyway and continued to do so until his case reached the U.S. Supreme Court. He cannot be trusted to obey the Constitution. The fact that he recently said that churches would never get above 50 people for at least 12 to 18 months, and now a few hours before he had to file with the Supreme Court he removes all restrictions, illustrates that he had no basis for the orders in the first place.

“The only thing that changed was he was dragged to the steps of the U.S. Supreme Court. While we are happy that all churches and houses of worship no longer have any restrictions, we want to make sure this tyranny and abuse never happens again.”

Indeed, this is one small victory in a great battle being fought in Illinois and many other states. It is time that governors are held accountable for their actions amid the pandemic and that steps are taken to ensure that such brazen violations of state and US constitutional rights do not happen again.

Silicon Valley Has Effectively Banned the Freedom of Speech. It’s Time We Take It Back