In 2018, intangible assets for S&P 500 companies hit a record value of $21 trillion. These assets, which are not physical in nature and include things like intellectual property, have rapidly risen in importance compared to tangible assets like cash. 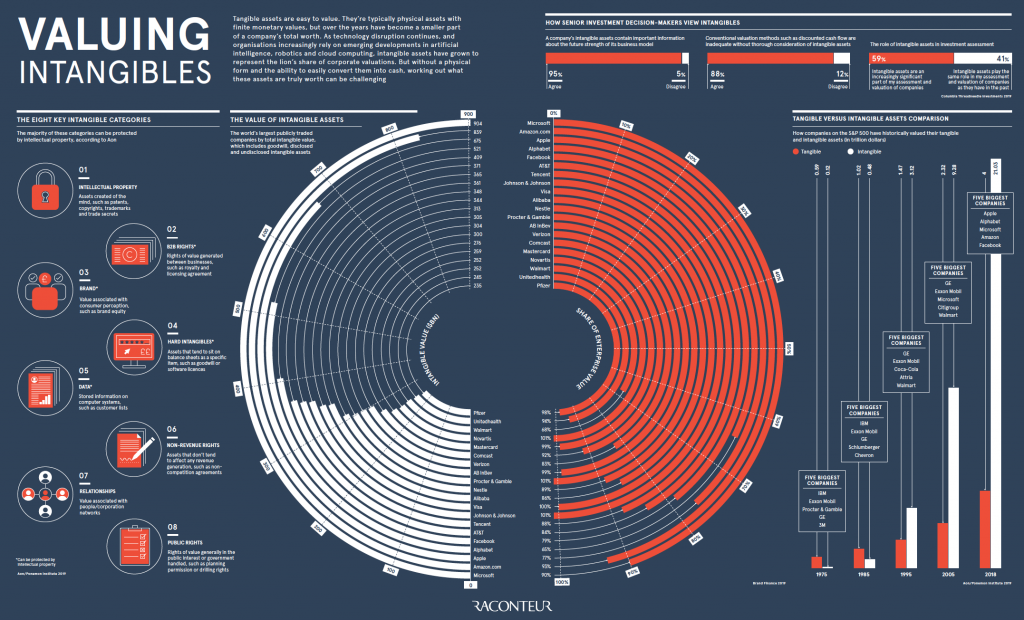 Tracking the Growth of Intangibles

Intangibles used to play a much smaller role than they do now, with physical assets comprising the majority of value for most enterprise companies. However, an increasingly competitive and digital economy has placed the focus on things like intellectual property, as companies race to out-innovate one another.

To measure this historical shift, Aon and the Ponemon Institute analyzed the value of intangible and tangible assets over nearly four and a half decades on the S&P 500. Here’s how they stack up:

In just 43 years, intangibles have evolved from a supporting asset into a major consideration for investors – today, they make up 84% of all enterprise value on the S&P 500, a massive increase from just 17% in 1975.

The Largest Companies by Intangible Value

Digital-centric sectors, such as internet & software and technology & IT, are heavily reliant on intangible assets.

Brand Finance, which produces an annual ranking of companies based on intangible value, has companies in these sectors taking the top five spots on the 2019 edition of their report.

Note: Percentages may exceed 100% due to rounding.

Microsoft overtook Amazon for the top spot in the ranking for 2019, with $904B in intangible assets. The company has the largest commercial cloud business in the world.

Pharma and healthcare companies are also prominent on the list, comprising four of the top 20. Their intangible value is largely driven by patents, as well as mergers and acquisitions. Johnson & Johnson, for example, reported $32B in patents and trademarks in their latest annual report.

A Lack of Disclosure

The majority of intangibles are not reported on balance sheets because accounting standards do not recognize them until a transaction has occurred to support their value. While many accounting managers see this as a prudent measure to stop unsubstantiated asset values, it means that many highly valuable intangibles never appear in financial reporting. In fact, 34% of the total worth of the world’s publicly traded companies is made up of undisclosed value.

“It is time for CEOs, CFOs, and CMOs to start a long overdue reporting revolution.”

Brand Finance believes that companies should regularly value each intangible asset, including the key assumptions management made when deriving their value. This information would be extremely useful for managers, investors, and other stakeholders.

Investment professionals certainly agree on the importance of intangibles. In a survey of institutional investors by Columbia Threadneedle, it was found that 95% agreed that intangible assets contain crucial information about the future strength of a company’s business model.

Moreover, 98% agree that more transparency would be beneficial to their assessment of intangible assets. In the absence of robust reporting, Columbia Threadneedle believes active managers are well equipped to understand intangible asset values due to their access to management, relationships with key opinion leaders, and deep industry expertise.

The Abolition of Britain

If You Think the Price of Oil Is Skyrocketing Now, Just Wait until the War Starts…

Hong Kong Announces Prison Penalties and up to HK$25,000 in Fines for Mask-Wearing as Violence Escalates

James Mason: Even Insiders Are No Longer Safe