we stated the “bear market” was not yet complete. This was despite the “market rally,” which convinced the media the “bull market was back.”

While it was indeed a sharp “reflex rally,” and expected, “bear markets” are not resolved in a single month. Most importantly, as we discussed in our employment report on Thursday, “bear markets” do not end with “consumer confidence” still very elevated.

“Notice that during each of the previous two bear market cycles, confidence dropped by an average of 58 points.” This past week, we saw early indications of the unemployment that is coming to America as jobless claims surged to 10 million, and unemployment in April will surge to 15-20%.

Confidence, and ultimately consumption, Which comprises 70% of GDP, will plummet as job losses mount. It is incredibly difficult to remain optimistic when you are unemployed.

No Light At The End Of The Tunnel – Yet.

The markets have been clinging on to “hope” that as soon as the virus passes, there will be a sharp “V”-shaped recovery in the economy and markets. While we strongly believe this will not be the case, we do acknowledge there will likely be a short-term market surge as the economy does initially come back “online.”  (That surge could be very strong and will once again have the media crowing the “bear market” is over.)

However, for now, we are not there yet. As we noted last week’s Macroview there are two issues currently weighing on the economy and markets, short-term.

“Most importantly, as shown below, the majority of businesses will run out of money long before SBA loans, or financial assistance can be provided. This will lead to higher, and a longer-duration of unemployment.” Furthermore, the bill only provides for  two and a half times a company’s average monthly payroll expense over the past 12 months. However, the bill fails to take into consideration that not all small businesses are labor and payroll intensive. Those businesses will fail to receive enough support to stay in business for very long. Furthermore, the bill doesn’t provide for inventory, other operating costs, and spoilage.

Small businesses, up to 500-employees, make up 70% of employment in the U.S. While the government is busy bailing out self-dealing publicly traded corporations, there will be a massive wave of defaults in the small- to mid-size business sector.

Secondly, we are not near the end of the virus as of yet. As noted last week:

“While there is much hope that the current ‘economic shutdown’ will end quickly, we are still very early in the infection cycle relative to other countries. Importantly, we are substantially larger than most, and on a GDP basis, the damage will be worse.”

This was confirmed again this week by the New York Times’ columnist David Leonhardt:

“Five ways we know that the American response to the coronavirus isn’t yet working. What the cycle tells us is that jobless claims, unemployment, and economic growth are going to worsen materially over the next couple of quarters.

The problem with the current economic backdrop, and mounting job losses, is the vast majority of American’s were woefully unprepared for any disruption to their income going into recession. As job losses mount, a virtual spiral in the economy begins as reductions in spending put further pressures on corporate profitability. Lower profits lead to higher unemployment and lower asset prices until the cycle is complete. For investors, this means a greater range of stock market volatility and near-zero rates of return over the next decade.

Over the last two weeks, we published several pieces of analysis for our RIAPro Subscribers (30-Day Risk Free Trial) discussing why the “bear market rally” should be sold into. On Friday, our colleague, Jeffery Marcus of TP Analytics, penned the following:

Meanwhile, the charts below of the S&P500 benchmark tell TPA the following: His analysis agrees with our own, which we discussed with you on Tuesday:

“While the technical picture of the market also suggests the recent “bear market” rally will likely fade sooner than later. As we stated last week:

‘Such an advance will ‘lure’ investors back into the market, thinking the ‘bear market’ is over.’

Importantly, despite the sizable rally, participation has remained extraordinarily weak. If the market was seeing strong buying, as suggested by the media, then we should see sizable upticks in the percent measures of advancing issues, issues at new highs, and a rising number of stocks above their 200-dma.” On a daily basis, these measures all have room to improve in the short-term. However, the market has now confirmed longer-term technical signals suggesting the “bear market” has only just started.

Price is nothing more than a reflection of the “psychology” of market participants. The mistake the media made by calling an “end” to the “bear market” is they were using an outdated proxy of a “20% advance or decline” to distinguish between the two.

However, due to a decade-long bull market, which had stretched prices to historical extremes above long-term trends, that 20% measure is no longer valid.

The chart below provides a visual of the distinction. When you look at price “trends,” the difference becomes both apparent and more useful.

This distinction is important. With the month, and quarter-end, behind us, we can now analyze our longer-term weekly and monthly price trends to make determinations about the market.

The market has now violated the 200-week (4-year) moving average. Given this is such a long-term trend line, such a violation should be taken seriously. Also, that violation will be very difficult to reverse in the short-term, and suggests lower prices to come for the market. Using the definition of “bull and bear” markets above, the market has also violated the long-term “bull trend” on a “confirmed” basis. 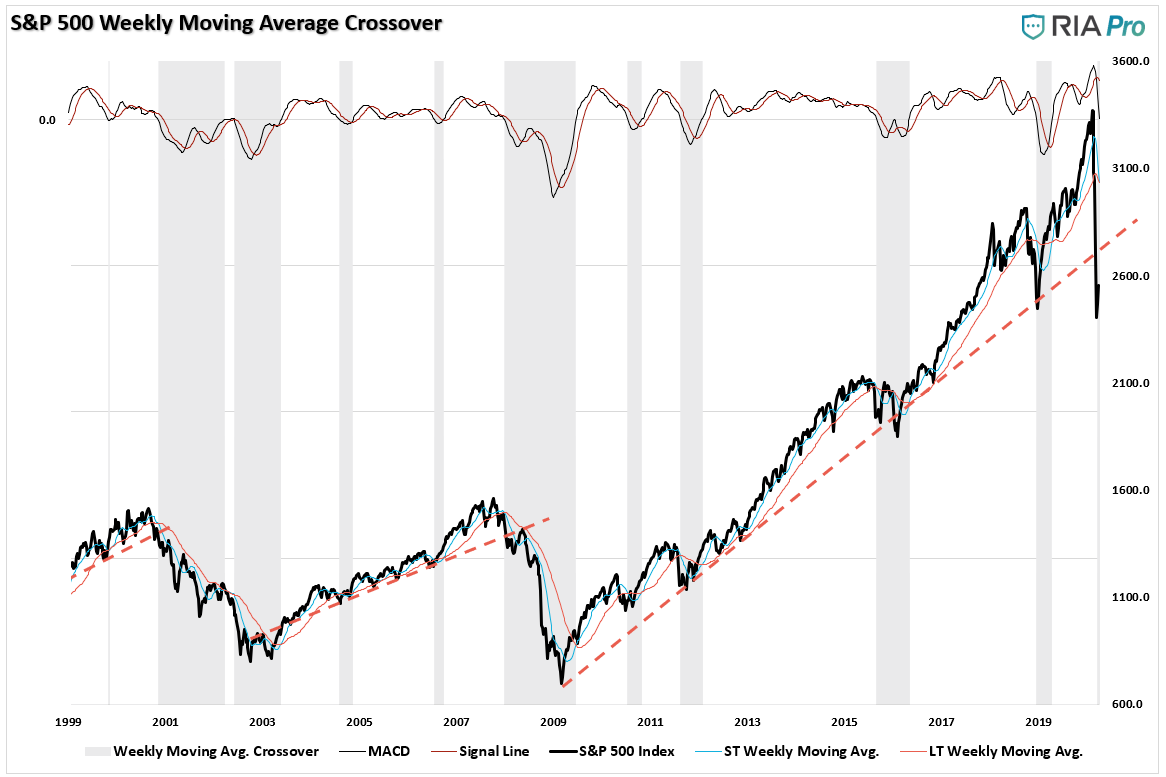 A confirmed basis is when the market violates a long-term trend, rallies, and then fails. As Jeffery Marcus, noted above, that market is now establishing a confirmed downtrend with the recent rally failing at downtrend resistance. (Also, the 50-200 dma negative cross will apply more downward pressure on any forthcoming rally.)

Most importantly, for the first time since the “Great Financial Crisis” lows, the market now has a confirmed close below the bull-trend line. If the market is able to rally in April, and close above the long-term trend line, then the “bull market” will technically still be intact. However, if the month of April closes below that trend, a confirmed “bear market” will be underway and suggests markets will see lower levels before it is over. There are reasons to be optimistic about the markets in the very short-term. We will get through this crisis. People will return to work. The economy will start moving forward again.

However, it won’t immediately go right back to where we were previously. We are continuing to extend the amount of time the economy will be “shut down,” which exacerbates the decline in the employment, and personal consumption data. The feedback loop from that data into corporate profits, and earnings, is going to make valuations more problematic even with low interest rates currently.

This is NOT the time to try and “speculate” on a bottom of the market. You might get lucky, but there is very high risk you could wind up losing even more capital.

For long-term investors, remain patient and let the market dictate when the bottom has been formed.

This is the basis of the 80/20 investment philosophy, and the driver behind our risk management process at RIA. Yes, you may sell to early and miss the 10% before the peak, or you sell a little late and lose the 10% from the peak. Likewise, you may start buying into the market 10% before, or after, it bottoms. The goal is to capture the bulk of the advance, and miss the majority of the decline.

Investing isn’t a competition of who gets to say “I bought the bottom.” Investing is about putting capital to work when reward outweighs the risk.

That is not today.

Bear markets have a way of “suckering” investors back into the market to inflict the most pain possible.

This is why “bear markets” never end with optimism, but in despair.

Are You Ready for the Great Depression of the 2020s?