Global linguistic diversity is under threat. Forty-six percent of all living languages are endangered. A language is being lost every three months, the vast majority of them without having been recorded or written down.

Languages and language families encode a vast array of cultural, ethnographic, anthropological, geographic and – most importantly – anthropogenic data. Beyond scientific knowledge, possessing one’s own language reinforces a sense of ethnic and cultural difference. Endangered languages are typically rich in the earthy lexicon of place, life, animal husbandry, plants, weather and sky, and light on the lexicon of modernity. The 7000+ extant languages and the 121 extant language families provide glowing testament to the richness of the diversity of the human experience, and as with diversity of many other types, deserves an absolute presumption towards preservation and revitalisation efforts. 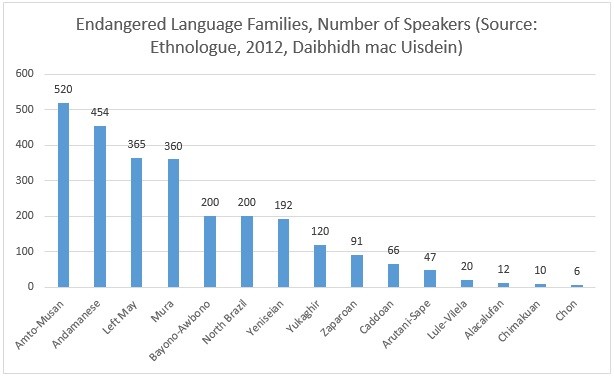 The Chon language family in Argentina comprises six speakers speaking two separate languages. The story of the Selknam in South America ostensibly ends as one of the darkest chapters of colonialisation, as the natives were hunted down mercilessly to make way for incomers’ landholdings, before being subjected to discrimination in the previous century, and ambivalence in our own.

Language revitalisation is such circumstances should be an urgent government priority. The establishment of model communities drawing on volunteers from the ethnic group in question, many of whom have forgotten the language of their ancestors, and supported by language revitalisation experts is one way in which governments can repay the intergenerational debt owed indigenous communities in situations where language death without intervention would be a near certainty.

In other situations, as with the aboriginal peoples in Australia, by contrast, the more appropriate solution might be to leave people groups alone. Giving indigenous groups a ‘right’ to the trappings of modernity, be it (Western) education, medicine, government and technology, is typically in practice to condemn the great richness of aboriginal cultures to oblivion. In the twenty-first century, technological and social change will be seductive enough without it being imposed coercively on traditional cultures. The right not to be modern (i.e. a form of group social and cultural self-determination) is perhaps one of the most fundamental rights of all.

The alternative is homogenisation. While technology, and in particular communication technology, can lead to the creation of interesting and vibrant subcultures, and can furnish some of the tool for language preservation, more typically its role is akin to painting a beige overlay over an ancient fresco.

Perhaps it’s time for us to celebrate the world’s ruggedness instead.

In Western culture, the celebration of roots and origins typically takes the form of a superficial pastiche: think St Patrick Day’s parades and gondola rides in Venice. We’re comfortable with commoditised, sanitised and gently participatory cultural and ethnic difference. Where a people group, such as the Roma or Mennonites, elects to maintain genuine separation, they are treated with disdain.

Originally published in the Linkedin Pulse.

Larry C. Johnson: Will Inspector General Horowitz Drop the Hammer on the FBI for FISA Abuse?

Sixty Percent of Americans Believe a Recession Is Coming, but Consumers Continue to Pile Up Debt at a Frightening Pace

Patrick Lang: Academic Conformism is the Road to ‘1984’