Why does the name of Joe Biden’s former Internet Technology guru, Warren Flood, appear in the metadata of documents posted on the internet by Guccifer 2.0? In case you do not recall, Guccifer 2.0 was identified as someone tied to Russian intelligence who played a direct role in stealing emails from John Podesta. The metadata in question indicates the name of the person who actually copied the original document. We have this irrefutable fact in the documents unveiled by Guccifer 2.0–Warren Flood’s name appears prominently in the metadata of several documents attributed to “Guccifer 2.0.” When this transpired, Flood was working as the CEO of his own company, BRIGHT BLUE DATA. (brightbluedata.com). Was Flood tasked to masquerade as a Russian operative?

Give Flood some props if that is true–he fooled our Intelligence Community and the entire team of Mueller prosecutors into believing that Guccifer was part of a Russian military intelligence cyber attack. But a careful examination of the documents shows that it is highly unlikely that this was an official Russian cyber operation.

We assess with high confidence that the GRU used the Guccifer 2.0 persona, DCLeaks.com, and WikiLeaks to release US victim data obtained in cyber operations publicly and in exclusives to media outlets.

The laxity of the Intelligence Community in dealing with empirical evidence was matched by a disturbing lack of curiosity on the part of the Mueller investigators and prosecutors. Here’s the tall tale they spun about Guccifer 2.0:

On June 14, 2016, the DNC and its cyber-response team announced the breach of the DNC network and suspected theft of DNC documents. In the statements, the cyber-response team alleged that Russian state-sponsored actors (which they referred to as “Fancy Bear”) were responsible for the breach. Apparently in response to that announcement, on June 15, 2016, GRU officers using the persona Guccifer 2.0 created a WordPress blog. In the hours leading up to the launch of that WordPress blog, GRU officers logged into a Moscow-based server used and managed by Unit 74455 and searched for a number of specific words and phrases in English, including “some hundred sheets,” “illuminati,” and “worldwide known.” Approximately two hours after the last of those searches, Guccifer 2.0 published its first post, attributing the DNC server hack to a lone Romanian hacker and using several of the unique English words and phrases that the GRU officers had searched for that day.

[Appelbaum note–According to Crowdstrike and Special Counsel Mueller, both were present, APT28 AKA “Fancy Bear” and APT29 AKA “Cozy Bear”.]

The claims by both the Intelligence Community and the Mueller team about Guccifer 2.0 are an astounding, incredible denial of critical evidence pointing to a U.S. actor, not a Russian or Romanian. No one in this “august” group took the time to examine the metadata on the documents posted by “Guccifer 2.0” to his website on June 15, 2016.

I wish I could claim credit for the following forensic analysis, but the honors are due to Yaacov Apelbaum. While there are many documents in the Podesta haul that match the following pattern, this analysis focuses only on a document originally created by the DNC’s Director of Research, Lauren Dillon. This document is the Trump Opposition Report document.

According to Appelbaum, the Trump Opposition Report document, which was “published” by Guccifer 2.0, shows clear evidence of digital manipulation:

There are several critical facts from the metadata that destroy the claim that Guccifer 2.0 was a Romanian or a Russian.

This begs a very important question. Did Warren Flood actually create these documents or was someone masquerading as Warren Flood? Unfortunately, neither the Intelligence Community nor the Mueller Special Counsel investigators provided any evidence to show they examined this forensic data. More troubling is the fact that the Microsoft Word processing software being used is listed as a GSA product. 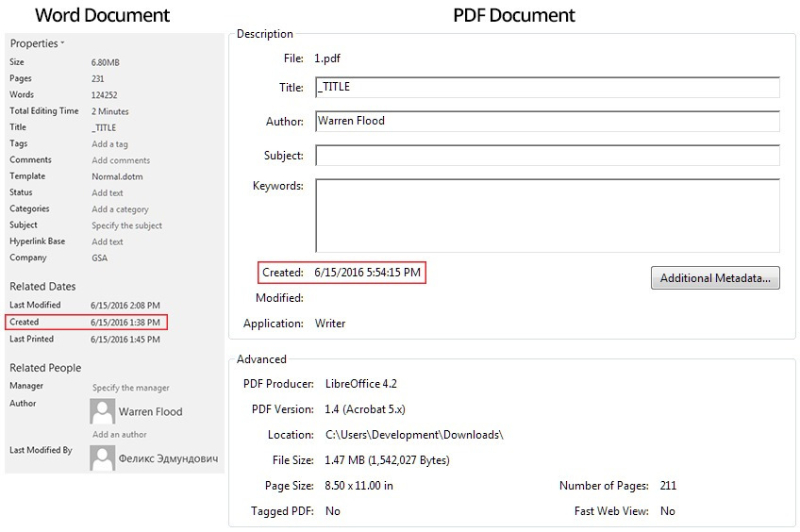 If this was truly a Russian GRU operation (as claimed by Mueller), why was the cyber spy tradecraft so sloppy? A covert cyber operation is no different from a conventional human covert operation, which means the first and guiding principle is to not leave any fingerprints that would point to the origin of the operation. In other words, you do not mistakenly leave flagrant Russian fingerprints in the document text or metadata. A good cyber spy also will not use computers and servers based in the United States and then claim it is the work of a hacker ostensibly in Romania.

None of the Russians indicted by Mueller in his case stand accused of doing the Russian hacking while physically in the United States. No intelligence or evidence has been cited to indicate that the Russians stole a U.S. Government computer or used a GSA supplied copy of Microsoft Word to produce the G2 documents.

The name of Warren Flood, an Obama Democrat activist and Joe Biden’s former Director of Information Technology, appears in at least three iterations of these documents. Did he actually masquerade as Guccifer 2.0? If so, did he do it on his own or was he hired by someone else? These remain open questions that deserve to be investigated by John Durham, the prosecutor investigating the attempted coup against Donald Trump, and/or relevant committees of the Congress.

There are other critical unanswered questions. Obama’s Attorney General, Loretta Lynch, sent a letter to James come on July 26, 2016 about the the DNC hack. Lynch wrote concerning press reports that Russia attacked the DNC:

If foreign intelligence agencies are attempting to undermine that process, the U.S. government should treat such efforts even more seriously than standard espionage. These types ofcyberattacks are significant and pernicious crimes. Our government must do all that it can to stop such attacks and to seek justice for the attacks that have already occurred.

We are writing to request more information on this cyberattack in particular and more information in general on how the Justice Department, FBI, and NCIJTF attempt to prevent and punish these types ofcyberattacks. Accordingly, please respond to the following by August 9, 2016:

So far no document from Comey to Lynch has been made available to the public detailing the FBI’s response to Lynch’s questions. Why was the Cyber Action Team not deployed to determine who hacked the DNC? A genuine investigation of the DNC hack/leak should have included interviews with all DNC staff, John Podesta, Warren Flood and Ellen Nakashima, The Washington Post reporter who broke the story of the DNC hack. Based on what is now in the public record, the FBI failed to do a proper investigation.

Andrea Williams: The Church Must Repent of Being ‘Just Another Club’

Can the Fed Truly Backstop Everything… and Will There Be a Second Round to the Crisis?

Michael Wood: The Future is East, Time for Electoral Realism

The Fed Just Revealed Plans for a Digital Dollar Replacement