Many people spend their days looking forward to their next getaway. But do you know exactly how much these vacation plans contribute economically to your chosen destination?

Today’s visualization from HowMuch.net highlights the countries in which tourists spend the most money. Locations have been resized based on spending amounts, which come from the latest data from the World Tourism Organization (UNWTO). 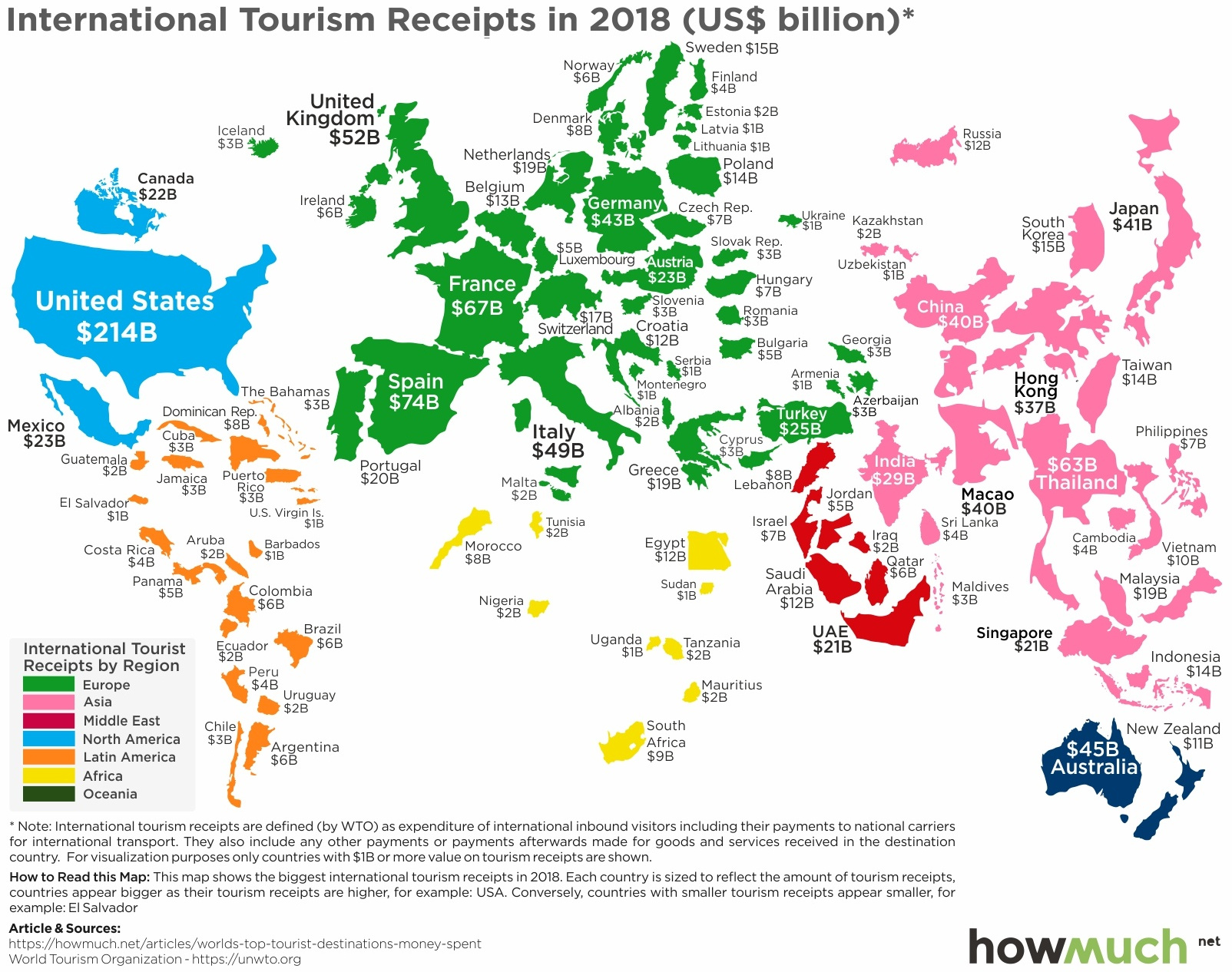 Oh, The Places Tourists Will Go

Across the different regions, Europe’s combined tourist spending dominates at $570 billion. Easy access to closely-located countries, both via rail networks and a shared currency, may be a reason why almost 710 million visitors toured the region in 2018.

Asia-Pacific, which includes Australia and numerous smaller islands, saw the greatest growth in tourism expenditures. Total spending reached $435 billion in 2018—a 7% year-over-year increase, from 348 million visitors. Not surprisingly, some areas such as Macao (SAR) tend to rely heavily on tourists as a primary economic driver.

Here’s how other continental regions fared, in terms of tourist spending and visitors:

Of course, these numbers only paint a rudimentary picture of global tourism, as they vary greatly even within these regions. Let’s look closer at the individual country data for 2018, compared to previous years.

The Top Tourist Hotspots, By Country

It seems that many tourists are gravitating towards the same destinations, as evidenced by both the number of arrivals and overall expenditures for 2017 and 2018 alike.

Source: World Tourism Organization (UNWTO).
Note that data is for international tourism only and does not include domestic tourism.

The top contenders have remained fairly consistent, as each country brings something unique to the table—from natural wonders to historic and man-made structures.

Where Highest-Spending Tourists Come From

The nationality of tourists also seems to be a factor in these total expenditures. Chinese tourists spent $277 billion internationally in 2018, likely thanks to the increasing consumption of an emerging, affluent middle class.

Interestingly, this amount is almost twice the combined $144 billion that American tourists spent overseas in the same year.

Will Podmore: The Scottish National Party Is Failing on a Daily Basis

General Electric Freezes Pension Plans for 20,000 Employees in an Effort to Cut Liabilities

Listen to Henry Kissinger: Globalists Have Big Plans for This [COVID19] Crisis