If you believe the stay-at-home orders issued by many state governors are an overreach and abuse of authority, well, watch out for the Facebook censor bots.

Facebook CEO Mark Zuckerberg confirmed in an interview with ABC’s George Stephanopoulos on Good Morning America this week that the social media platform will be banning pages and posts aimed at organizing protests against stay-at-home orders, referring to these efforts as “misinformation.”

Stephanopoulos asked Zuckerberg how the company deals “with the fact that Facebook is now being used to organize a lot of these protests to defy social distancing guidelines in states. If somebody trying to organize something like that, does that qualify as harmful misinformation?”

“We do classify that as harmful misinformation and we take that down,” confirmed Zuckerberg, while also ironically claiming “that people can debate policies” on his platform.

Facebook spokesman Andy Stone also confirmed to CNN’s Donie O’Sullivan that protest organizers in California, New Jersey, and Nebraska were having their pages removed from Facebook at the request of state authorities. 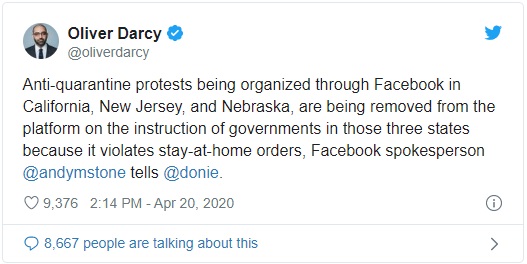 President Trump has expressed support for the protests. Breitbart reports:

This comes after President Trump gave his support to protesters in several states who are demonstrating against their governors’ stay-at-home orders, including a 3,000-strong protest in Lansing, Michigan. Michigan protesters have used Facebook to organize.

On Twitter, the President called on protesters to “liberate” the states of Michigan, Minnesota, and Virginia, also calling on Virginian citizens to “save your great 2nd amendment. It is under siege!”

“These are people expressing their views,” said the president. “They seem to be very responsible people to me, but they’ve been treated a little bit rough.”

It is troubling indeed that Facebook has decided to take it upon themselves to decide who is worthy of a platform and who isn’t. Perhaps more troubling are reports that state authorities are actually beginning to call for the censoring of these protest efforts. That is completely unconstitutional. Not only do we, as citizens of the United States, have freedom of speech but we also have the right to peacefully assemble. A pandemic doesn’t change that.

Protesters Showed Up in Coeur d’Alene, Idaho but the Locals Made Sure that There Would Be No Riots…

Larry C. Johnson: Are the Coup Plotters against Trump Facing a Reckoning?