Pete Buttigieg is pushing “A New Call to Service” for millennials. If Pete is elected—he is currently running head-to-head with Warren, Sanders, and Biden—his “call” will become a mandatory form of slavery. 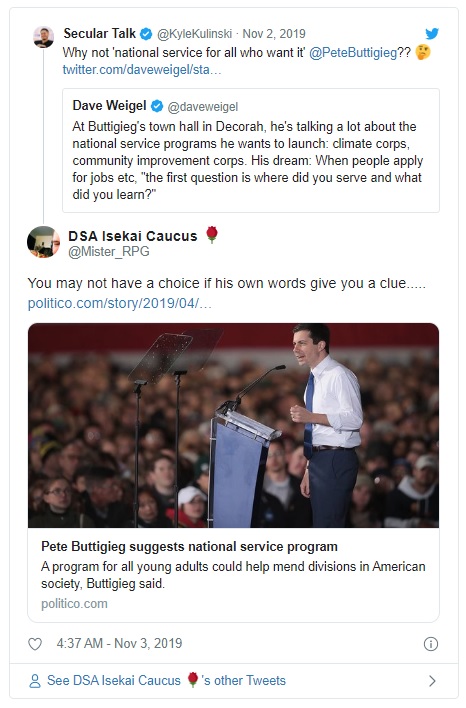 As should be expected, Buttigieg’s plan is gussied up with identity slash social justice baggage. It hopes to suck in naive millennials with the promise of student loan debt relief.

From Politico earlier this year.

Service fellows would be considered for student debt forgiveness, hiring preference and vocational training. The plan also calls for developing new types of service corps like a Climate Corps, a Community Health Corps, or a Intergenerational Service Corps. All of them would operate under the leadership of a chief service officer, who would serve on the Domestic Policy Council and the National Security Council.

Slaves for the national security state. This is hardly a new concept. Between World War 2 and the Vietnam War, millions of young Americans were drafted and tens of thousands killed. This form of indentured servitude to the state was shelved after college students and other young people went into the streets, burned draft cards, and immigrated to Canada.

If this proposal becomes reality, bone spurs of the rich may not be an excuse to avoid a government mandated “call to service.” Of course, the mega-wealthy always find ways to protect their children from the meat grinder of the state.

Buttigieg was emphatic that he’s not talking about forcing people to serve only in the military. Again, there were no details, but his national service plan would include having 18-year-old kids sign up for the armed forces or for a wide variety of other public-sector jobs. National service, he avers, is “one of those ideas that’s always popular but never urgent.” That’s true, regardless of political persuasion. Democrats such as former New Jersey Sen. Bill Bradley was also yammering on about it and the conservative Republican William F. Buckley, Jr. wrote a 1990 book, Gratitude, touting the idea.

Indeed, forcing the commoners to fight the Empire’s forever wars or sweeping streets and polishing national monuments (which, of course, will not be Confederate) is supported by both sides of the corporate political class. Sociopaths in statehouses and Congress have no problem forcing 18 year old plebs to forfeit a year or more of their lives in service to a government that doesn’t represent them and serves the interests of banks and corporations.

Gillespie writes Mayor Pete’s mandatory service plan—the only way this will work—is “deeply illiberal” and “profoundly at odds with the American experience.”

That may have been true a couple generations ago, but it certainly doesn’t ring true today. It’s fair to say the vast majority of citizens know little about the “American experience” of the past, and no matter the propaganda, the feel-goods, and other enticements (student loan forgiveness), few will sign up. It will take the threat of prison and fines to motivate basement-dwelling millennials to become indentured servants.