The issue of vaccination mandates is among the greatest threats to American liberty.

Not only is our right to accept or refuse medical treatments under fire, but even the freedom to think for ourselves is rapidly crumbling under the weight of “settled science.”

As our society continues to abandon civil discourse, both conservatives and liberals alike are all too eager to punish thought criminals who dare break from the acceptable talking points on the issue of vaccination. The only options are complete acceptance or silence.

Little by little, however, bold Americans with sizable platforms are daring to take the third option and risk becoming pariahs in favor of the truth. While our individual decisions on whether or not to vaccinate are all unique, we agree on one thing: the right to informed consent or refusal lies with the individual or their parent, not the state.

Last week, conservative commentator Candace Owens lent her voice to the fight, lamenting that several states are looking to mandate the human papilloma virus (HPV) vaccine for schoolchildren and even allow minors to receive the vaccine without parental consent: 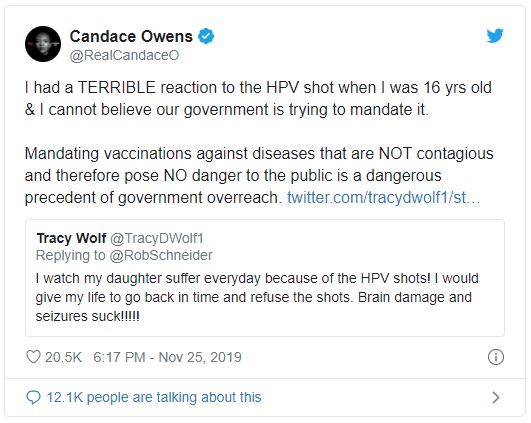 Naturally, Owens’ tweet received a massive, mixed response. While the typical knee-jerk mockery ensued, many followers applauded her common-sense statement and even shared their own stories of debilitating reactions to this particular shot.

Owens’ tweet, as her detractors seemed to ignore, was a response to a parent sharing that her daughter has experienced brain damage and seizures as a result of the HPV vaccine. 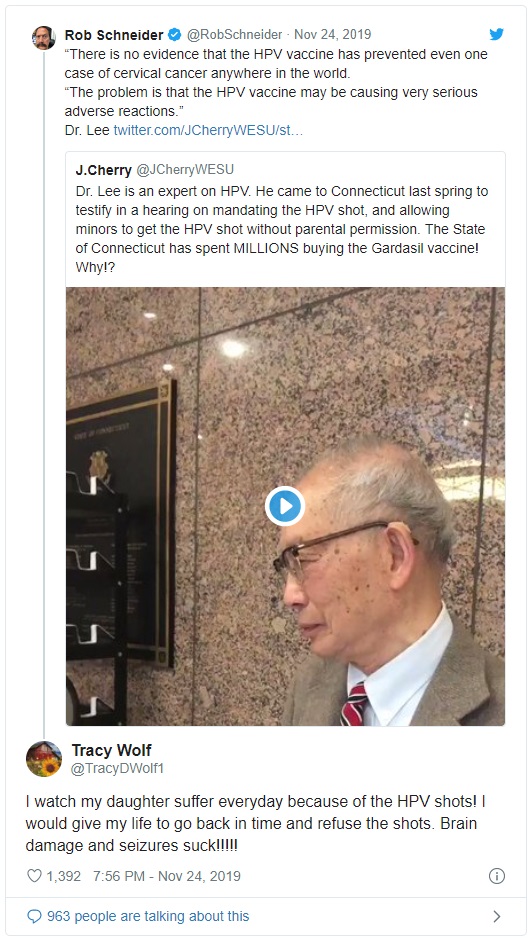 Surely such a potentially risky drug shouldn’t be immune to questioning!

That mother’s tweet was a response to another tweet from Hollywood actor-turned-activist Rob Schneider. Schneider, quoting HPV researcher Dr. Sin Hang Lee, stated that “There is no evidence that the HPV vaccine has prevented even one case of cervical cancer anywhere in the world…The problem is that the HPV vaccine may be causing very serious adverse reactions.”

Conservative author Michelle Malkin lauded Schneider’s long-time advocacy for parental rights and his courage to stand up against “increasing censorship of vaccine skeptics by Big Pharma and Big Tech.”

“With the Overton window on acceptable discourse about government-coerced immunization rapidly shrinking, Schneider’s timing couldn’t be better,” Malkin continued, pointing to a handful of Schneider’s tweets on the issue. 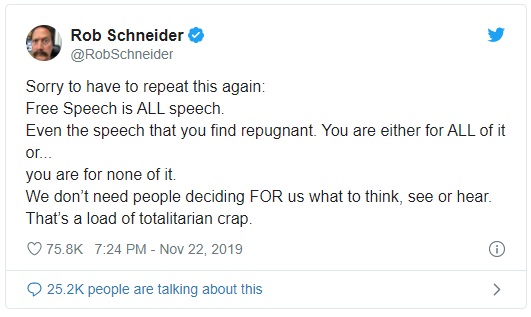 Yes!! As we’ve frequently reported, Big Tech behemoths routinely silence any unacceptable thought, whether it be the expression of mere conservatism, dissent from LGBT ideology, or the dreaded “anti-vaccine propaganda.”

As I reported in March (see “Vaccines skeptics under siege,” March 6, 2019), social media kingpins in America have launched a crackdown on “anti-vaccine” speech by rigging search results and algorithms. A Pinterest insider confirmed to me recently that the image-sharing network’s targeting of moms who shared negative memes and information about adverse vaccine reactions was the “canary” in the free speech coal mine. Facebook and Instagram also actively suppress vaccine-critical posts and re-direct them to government sources promoting vaccine mandates. One fact they aren’t linking: $4 billion has been paid by the federal government to adults and kids harmed by vaccines.

As Malkin points out, the vaccine thought police exist on both ends of the political spectrum, not just the totalitarian leftists:

I’ve fought this battle before. It’s not just speech-squelching Silicon Valley and special interest Democrats colluding to suppress the freedom to question mandatory vaccine programs and disseminate information challenging Big Pharma and Big Government’s narratives. A decade ago, I sounded the alarm over former GOP Texas Governor Rick Perry’s shocking executive order forcing every sixth-grade girl to submit to a three-jab regimen of the Gardasil vaccine and mandating that state health officials make the vaccine available “free” to girls ages 9 to 18 — only eight months after the FDA had approved it.

Before backing down, Perry’s Republican administration smeared Gardasil-mandate critics as fear-mongers and vaccine-skeptical parents as public health threats, while Merck’s political action committee dumped nearly $400,000 into the Republican Governors Association (Perry’s largest donor). I was dismissed as “fringe” for exposing shady science and conflicts of interest.

Most recently, an ignorant smear merchant for the conservative Washington Examiner derided me for having “peddled the lethal pseudoscience of anti-vaxxing amid a global health crisis spurred by that very movement” — and deemed me “unworthy of America.”

While they may have been unpopular, I highly doubt that critics of the 18th-century smallpox vaccination campaign would ever have been deemed “unworthy of America” by their contemporaries! But, again, civil discourse is on its deathbed, and “inclusivity” only applies to those with the right thoughts and beliefs.

This is not a battle to back away from, saints. As Malkin concludes, it is those who dare to think for themselves “who are the real patriots defending our freedoms of speech, assembly, press and conscience.” When our liberties are being stolen from us, silence is not an option.

Christian Politician under Criminal Investigation for Quoting the Bible on Homosexuality

Coronavirus and the Rise of Social Media Censorship