The state of Virginia has fallen so far from the beacon of liberty its founders made it to be. Its motto, Sic Semper Tyrannis, is a literal defiant threat to tyrants, yet it has been overrun with tyrants in each facet of its government.

Earlier this week, Northam declared a state of emergency in an attempt to stifle the massive backlash of his unconstitutional gun-grabbing moves and head off any possible threat at an upcoming Second Amendment rally in Richmond.

As we approach the day of the rally, the situation in the Old Dominion has not improved in spite of attempts by Second Amendment advocacy groups challenging Northam’s unconstitutional gun bans in court.

According to NBC 12, Northam declared a temporary state of emergency on Wednesday, banning all weapons, including firearms, from the Capitol grounds, invoking the Charlottesville protests in 2017 which, incidentally, saw one counterprotester killed and several others wounded by a man who drove a car into the crowd. The state of emergency is scheduled to last from Friday night through Tuesday.

During his Wednesday announcement, Northam claimed there was “credible intelligence” that militias and other pro-gun groups were threatening violence at the rally.

According to WND, Gun Owners of America, the Virginia Citizens Defense League, and several individuals have taken the fight to the Virginia Supreme Court after a lower court upheld Northam’s unconstitutional band.

Naturally, Northam applauded the lower court’s decision to affirm his chicanery, pointing to an incident on Thursday which saw the arrest of three alleged members of a radical group, saying, “These threats are real — as evidenced by reports of neo-Nazis arrested this morning after discussing plans to head to Richmond with firearms.”

A statement from the Department of Justice reveals that the FBI arrested Brian Mark Lemley of Maryland, William Garfield Bilbrough of Maryland, and Canadian national Patrik Jordan Mathews and charged them with the interstate commerce of weapons. Lemley and Bilbrough were also arrested for transporting illegal aliens.

The three were allegedly part of a group called “The Base,” which the FBI describes as a “racially motivated violent extremist group.”

According to The Wall Street Journal, law enforcement officials say the three men had discussed traveling to a pro-gun rally Monday in Richmond, Virginia, and were “preparing for a potential race war.”

During a cabinet meeting back in November, Northam revealed a barrage of extreme gun control measures he and his state’s draconian Democrats hoped to pass this year. According to The Washington Post, they included, “universal background checks, banning the sale of [semi-automatic firearms] and high-capacity magazines, restoring the law that limits purchases to one gun a month, and a red flag law that would empower a court to temporarily remove a gun from a person deemed to be a risk to himself or others.”

“We will at least start with those,” Northam said, ominously.

Traditionally a very red state in spite of continuing to fall into the progressivist trap, Virginia is not expected to be disarmed without a fight. According to InfoWars, however, this is especially alarming considering moves during the Obama Administration, which are still in effect today, to militarize local police and discourage any hesitancy toward disarming or firing upon American citizens.

Thankfully, Virginian gun owners and Constitution-abiding law enforcement officials haven’t fallen asleep on the job and are rising up to match Northam’s resolve.

According to The Daily Wire, pro-Second Amendment activists have surged across the state with the overwhelming majority of counties declaring themselves to be “Second Amendment sanctuaries” that will not comply with Northam’s radical agenda.

“The grassroots resistance to Virginia Democrats’ extreme anti-Second Amendment agenda has exploded as nearly 90% of the counties in the state have declared themselves to be sanctuary cities in response to the Democrats’ anti-freedom agenda,” The Daily Wire reported back in November. “More than 100 cities, towns, and counties have passed resolutions in preparation for Democrats taking over the state who had indicated a desire to confiscate semi-automatic firearms from law-abiding citizens.”

Northam’s extremism has prompted hundreds of former sideline-dwellers to become activists and defend their rights, especially under the guidance of the National Rifle Association: 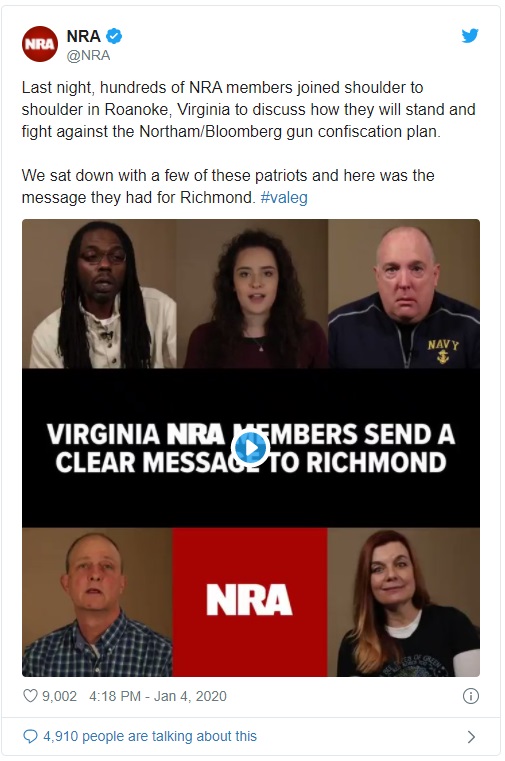 Virginians, now is the time to be alert and watchful! Attend rallies, be in constant contact with your state delegate and senator to fight any anti-Second Amendment legislation, and defend your rights! Let’s show Northam the meaning of “shall not be infringed!”

John Whitehead: Sin Taxes and Other Orwellian Methods of Compliance That Feed the Government’s Greed

Larry C. Johnson: The Fabricated “Predicate” to Spy on the Trump Campaign

Larry C. Johnson: Yes, There Were FBI Informants, but They Were Paid by the CIA?