In Southeast Asia, there is currently no shortage of territorial disputes. Many such disputes are over vast areas of land and sea, an paradigmatic example of which is the dispute over the Northern Malaysian state of Sabah on the Island of Borneo.

In recent months, Malaysia has presented “its second diplomatic note over the disputed South China Sea in the past month, this time pushing back against controversial Philippine territorial claims over the state of Sabah”. The latest note was issued to the United Nations on 27 August 2020 following a previous note scolding Beijing and the Chinese Government over its claims to the South China Sea.

The most recent note, according to a Malaysian source, “shines a light on how the dispute is in fact a complex intramural row among all the claimants, and not one that simply pits regional giant China against Southeast Asian parties”. The said claimant states – Malaysia, the Philippines, Vietnam, Brunei and the Republic of China (Taiwan) – have in recent months been using said notes as a method of fleshing out each side’s respective position over the said territorial claims. 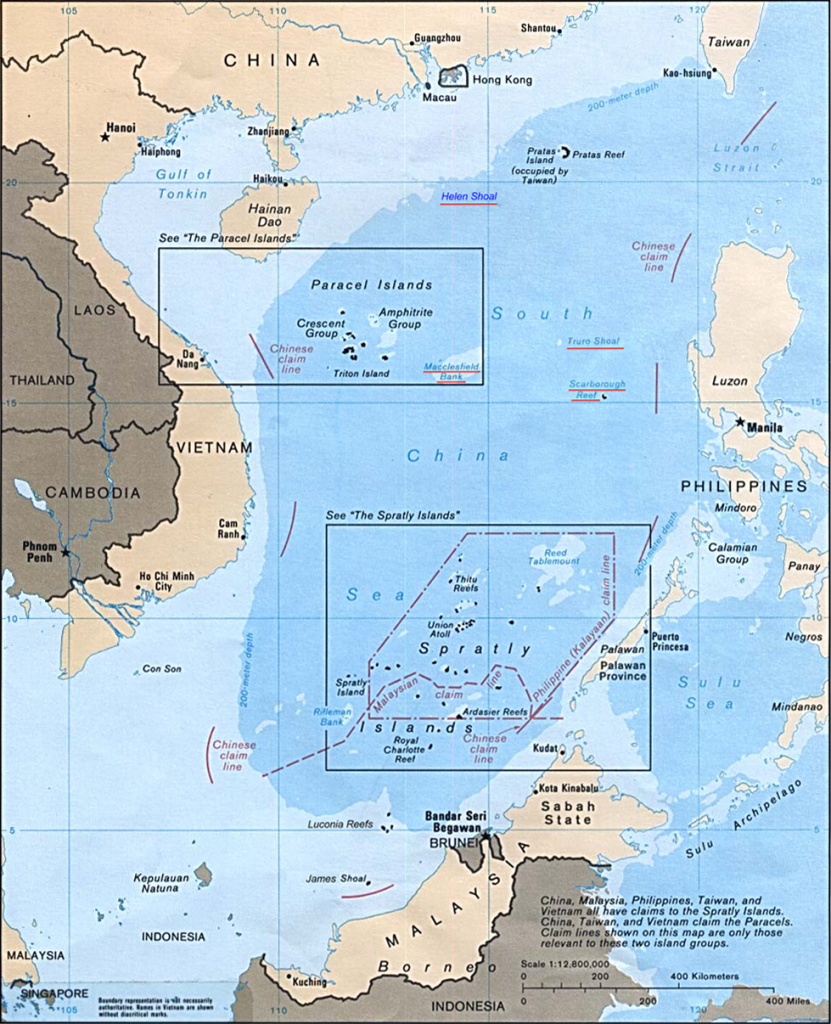 Map of Sabah State at the north of Borneo

The latest note was from Malaysia was a response to a Filipino note of March 2020 that challenged Putrajaya’s plan to extend the recognised area of continental shelf off the coast of Sabah. In this note, Manila contested Malaysia’s claims in two areas. Firstly, it was claimed that Putrajaya was making false claims over the waters “in the Kalayaan island group it claims as its own” and that the plan being proposed is based on projects from Sabah “over which the Philippines has never relinquished sovereignty”. While Malaysian control over the state of Sabah in the north of Borneo is largely undisputed, it is not uncommon for Filipino government officials to advocate for Filipino sovereignty over the state, because of Malaysia’s claims of the Sulu Sea.

As such, regarding the objections, Malaysia has stated that it “has never recognised the Republic of the Philippines’ claim to the Malaysian state of Sabah, formerly known as North Borneo”.

The recent disagreement is a rather rare occurrence for the Association of Southeast Asian Nations (ASEAN), which has largely presented a united front towards China and its claims over the South China Sea. This has often been discussed by Foreign Policy scholar Ngeow Chow Bing who has stated that “Resolving these disputes and presenting a common united front between the Asean claimant states is actually easier said than done,” and that “Of course, the Asean solidarity is real, but difficulties in resolving disputes between them are real and not to be underestimated too.”

In the meantime, Malaysia and the Philippines have been locked in a terse social media spat over the issue. In July 2020, Foreign Minister Teddy Locsin Jnr. of the Philippines wrote that “Sabah was not in Malaysia”. In doing so, Locsin was merely echoing Manila’s long-held view on the issue of sovereignty over Sabah. Malaysian Foreign Minister Hishammuddin Hussein angrily reacted to Locsin’s comments, while the Malaysian is also angry that the Philippines wants to change the maps that appear in Filipino passports to show Sabah as being part of the territory of the Philippines, a proposal that has been approved by the House of Representatives in Manila.

Overall, such actions and decisions look only to further cause division and create disunity within ASEAN regarding the South China Sea, and will limit its ability to present a united front against Chinese aggression within the region.

Nathan Wilson is a student of philosophy and politics at the University of Stirling, specialising in International Politics and Political Violence within the Asia-Pacific region. He previously studied abroad at Lingnan University in Hong Kong.