As several states continue to push mandatory childhood vaccinations for children to attend school, parents and advocates of informed consent in New Jersey have cause to celebrate!

As we previously reported, a bill that would have invalidated all past, current, and future religious exemptions to vaccination for public and private schools, colleges, and universities stalled in the state Senate last month. The bill passed in the Assembly by a 45-25 vote, but proponents of the bill in the Senate knew they didn’t have the votes to ensure the bill’s passage. They elected instead to put the vote on hold.

“They can cheer all they want. We’re not walking away from it,” Senate President Stephen M. Sweeney said of the applause after announcing the postponement of the vote.

“It’s just remarkable how people are looking at this and not trusting the science on it at all,” Sweeney continued, predictably writing off the concerns of thousands of New Jersey parents as being “anti-science” and “trusting the internet.”

According to the DC Clothesline, the bill was canceled in the Senate ahead of the vote because, yet again, senators knew they couldn’t muster sufficient votes. 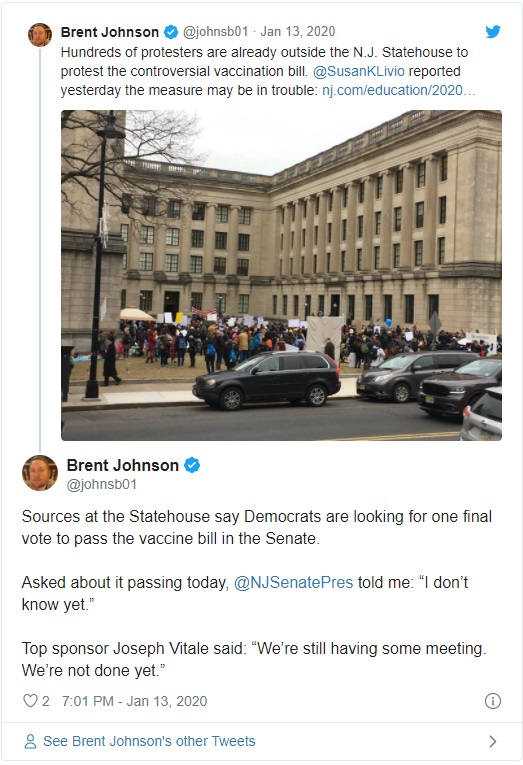 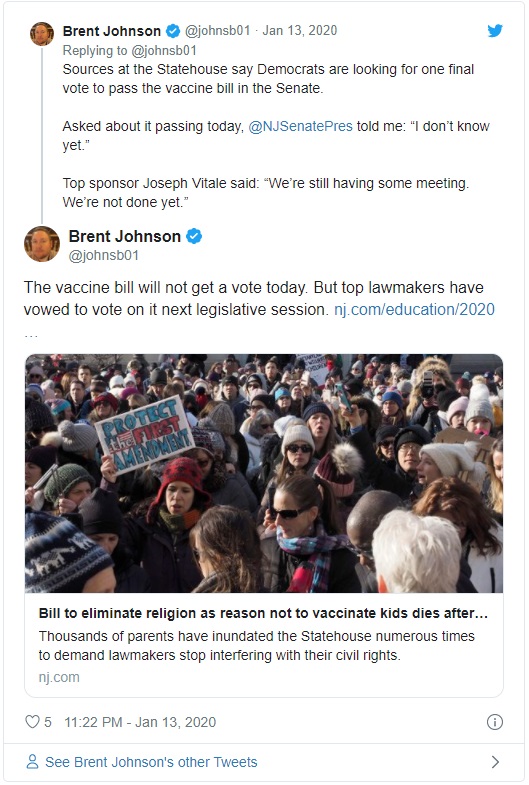 This is what taking a stand looks like, folks!!

Sue Collins, co-founder of the New Jersey Coalition for Vaccination Choice, told NJ.com this was “a victory for both religious and medical freedoms” in the state.

“There is a lot of work to be done now to formulate legislation that will truly improve public health,” Collins said. “This bill would not have achieved that and would have stripped fundamental rights.”

Whether or not you vaccinate is not the issue. This is a matter of each individual and family maintaining the right to bodily autonomy and the exercise of informed consent alongside their healthcare providers. Legislators are not doctors and they do not own our children—why should they be entitled to make decisions for them as such?

While this is a huge victory, make no mistake. These tyrants will be back, and they’ve sworn to reintroduce it on Tuesday.

“We’re ready to go to war over this,” Sweeney said on Monday, according to NJ.com. “We will pass this bill. This is about public health. It’s about protecting people.”

Keep up with the New Jersey Coalition for Vaccine Choice on their website and on Facebook for more updates on how to continue fighting medical tyranny in the state. Now is the time to rejoice and regroup, not fall asleep!

The Future of a Free Humanity Depends on Our Actions Today

Brandon Smith: Why the Public Should Rebel against Forced Vaccinations