After the 2008 financial crisis, huge companies like AIG asked for billions in bailout cash, claiming they would close up shop if they didn’t get the funds.

The truth of the matter is that they had screwed up and wanted U.S. taxpayers to foot the bill. This situation left a bad taste in the mouths of most Americans.

Fast forward to today’s chaotic COVID-19 market, and it looks like history may be repeating itself. This time, the U.S. is on the verge of bailing out airlines. And soon to follow could be public pension funds.

An article in the Wall Street Journal shed light on the first U.S. state to request bailout funds:

Illinois has requested a federal bailout of its struggling public-employee retirement plans, which had unfunded liabilities topping $469 billion in 2018, according to a Federal Reserve study.

The problems in the state’s public pension fund are well known, and the fact that Harmon requested emergency funds should only serve to make those problems more obvious.

The Daily Herald lamented, “Despite pumping more and more into the pension systems each year, Illinois continues to slide deeper into debt.” And, the article goes on, Illinois may not be able to get financial help from the private sector any longer:

Excessive debt driven by the pension crisis has left Illinois with the lowest credit rating in the nation, just one notch above junk status. That means private investors may not be willing to lend Illinois money much longer.

It would seem that asking taxpayers who are already concerned with their own situation for more money would be a bad idea. But that’s what Illinois is doing.

Worse, Illinois isn’t the only state with big pension problems. In fact, quite a few others could soon be seeking bailouts. Consider the map below from the American Legislative Exchange Council, which ranks state pension funding from worst (50) to best (1): 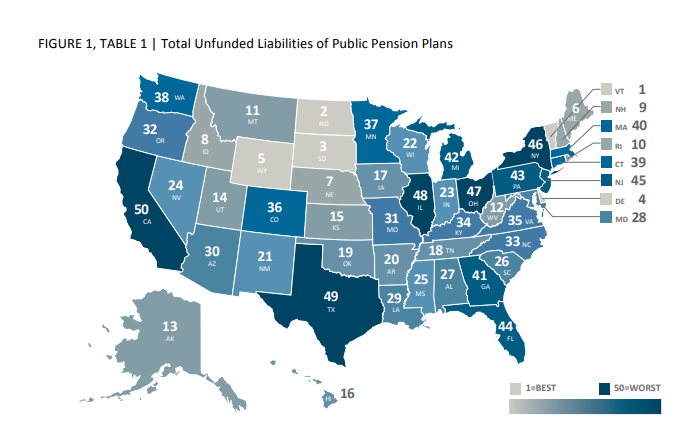 Each of the lowest ranking state pensions (in darker shades of blue) could be a candidate for a bailout at some time in the near future.

And regardless of whether strings are attached to this funding, Forbes says bailing out pension funds isn’t a good idea:

The pension crisis has been the result of a long line of politicians refusing to take responsibility for pension funding. A set of mandates from the federal government will motivate Illinois politicians, to be sure — they will become all the more innovative at finding loopholes and seeking waivers, rather than taking responsibility.

But perhaps even more important is the fact that bailing out state pension funds during this crisis could affect everyone.

Pension or Not, Here’s How No American Will Be Spared

If state governments start getting bailed out, the first and most obvious way you would be affected is through increased taxes.

But even if states don’t get a bailout, they aren’t likely to just let their pensions wither and die. So, they could start looking for ways to cut back on services.

One example, according to a different Forbes piece, shows that states may begin prioritizing failing pensions over infrastructure:

Berkeley city council is taking criticism for prioritizing pension payments ahead of public works projects. Voters approved bond issues supposedly dedicated to infrastructure but the city is apparently not doing the work.

States could even cut emergency services like police, fire, and medical response.

Protect Yourself While Politicians Beg for Pension Bailouts

Even though you may not have a say when the pension crisis might strike your wallet, you can still make your retirement portfolio more resilient.

You can consider adding some stability to your portfolio by shifting a percentage of assets into precious metals like gold and silver.

But whatever you do, don’t wait. The ripple effects of public pension failures aren’t going to wait for anyone.

Does the CARES Act Actually Care for Your 401k?

Sugar and Spice and Everything Vice: The Empire’s Sin City of London