NYC Mayor Bill de Blasio confirmed on Monday that his daughter, Chiara, was arrested at a protest over the death in police custody of George Floyd.

During a Monday news conference, the Democratic mayor noted that neither he nor his wife Chirlane McCray were aware of their 25-year-old daughter’s “intention to get arrested” on Saturday night. After hearing her side of the story, however, de Blasio said he supported her actions.

“I love my daughter deeply. I honor her. She is such a good human being. She only wants to do good in the world. She wants to see a better and more peaceful world,” de Blasio said. “I’m proud of her that she cares so much she was willing to go out there and do something about it.” 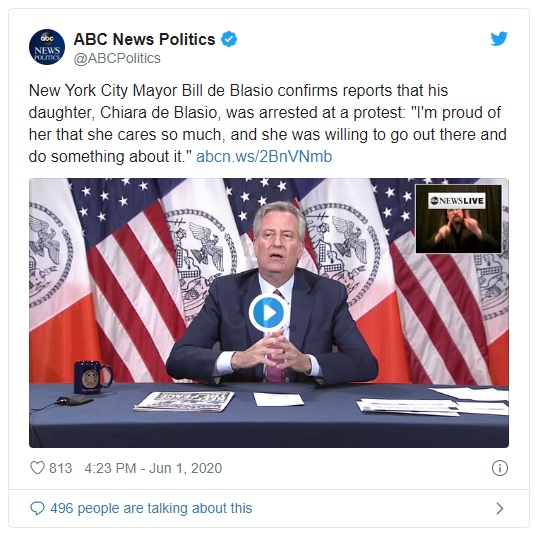 According to the New York Post, Chiara de Blasio was reportedly taken into police custody Saturday night for blocking traffic on Broadway, one of the city’s busiest streets.

When police asked the crowd to disburse, Chiara allegedly refused and was given a citation for unlawful assembly.

Law enforcement sources told the New York Daily News that Chiara was allegedly a part of a group fighting with police and throwing things at them, but that she did not throw anything during the protest.

“She was acting peacefully,” de Blasio said during the news conference. “She believes everything she did was in the spirit of peaceful, respectful protest. I admire that she was out there trying to change something she thought was unjust and trying to do something in a peaceful manner.”

It’s worth noting that de Blasio’s glowing description of his daughter’s dubious heroism is starkly contrasted with his speech toward violators of New York’s coronavirus lockdown measures, which included a ban on all non-essential gatherings.

Back in April, New York City Mayor Bill de Blasio threatened a massive funeral procession of Orthodox Jews mourning a rabbi who had passed away from COVID-19 with summonses and arrests if they did not disperse. His press secretary, Freddi Goldstein, empathized with mourners but called their gathering “absolutely unacceptable.” 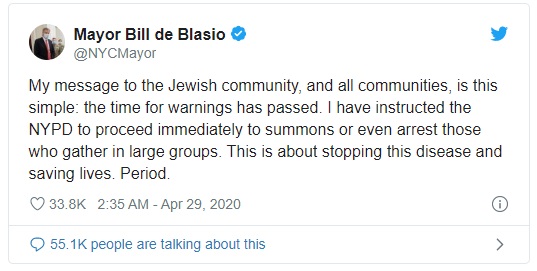 It seems more than a little odd that protests over the unjust death of George Floyd are apparently given a pass, while nonviolent gatherings of demonstrators against lockdowns and Jewish mourners are “unacceptable.”

But, then, that’s the social justice caste system for you.

“Both China and the United States Have Lost”: An Exclusive Interview with Professor Jayant Menon

Martin Parsons: As the Four-Hundredth Anniversary of the Mayflower Approaches, Has the UK Forgotten Its Significance?

Millions of Pigs, Chickens and Cattle Are Being Euthanized While the Media Warns “Shortages” Are Coming