RS Components has released a new report which analyses Crunchbase data and a survey targeting teachers to reveal the state of educational technology (EdTech) in the UK in relation to training, funding and which areas are falling behind.

In compiling the report, the company surveyed teachers across the UK to get their views on educational technology (EdTech), its impact on everyday learning and whether their schools are investing enough.

The key findings from the Report were as follows:

How many teachers are aware of EdTech?

Although there are plans for a £10 million UK government strategy for EdTech in schools which promises to reduce teacher workload, boost student outcomes and help level the playing field for those with special needs and disabilities, there is still a lack of understanding when it comes to educational technology amongst teachers. When surveyed, half of teachers (51%) said they know what EdTech is but alarmingly more than 1 in 10 (14%) have never even heard of it, which suggests that the pupils may not be getting the most out of the technology available.

With more than 1 in 10 (14%) teachers admitting they’ve never heard of EdTech and 36% saying they have heard of it but don’t know what it is, the report reveals that many teachers are struggling to adapt to this new way of learning. Currently, a lack of training on EdTech is meaning that schools are at risk of investing thousands of pounds in EdTech apparatus that fails to deliver.

The report by RS Components reveals that the largest knowledge gap when it comes to EdTech exists in academy schools, with 3 in 5 academy school teachers (60%) commenting that they don’t think there is enough training available when it comes to technology. Similarly, over half (54%) of public school teachers also said they don’t believe there is enough training available.

Academy schools are also being let down when it comes to funding. Given the additional autonomy that academies have over their finances, 60% of academy teachers said that funding and resources for educational technology have been cut at their school over the last few years.

Are teachers plugging the gap?

RS Components has been working with the Young Enterprise programme for almost two decades and understands the importance of technology within education in order to raise the next generation of engineers and entrepreneurs, alongside the importance of funding for EdTech in schools.
However, when funding for EdTech is cut, teachers can be left without the right resources to teach, meaning their pupils may be missing out on vital education. This has led some selfless teachers to plug the gap and use their own money to provide supplies for students. The survey found that 37% of teachers have previously purchased tech supplies for their students and have, on average, spent over £40 doing so. But in which subjects are teachers spending the most on supplies?

The research reveals that Music is the subject where teachers have spent the most of their hard-earned money on technology supplies due to lack of funding, with Design & Tech and IT closely following behind. The subjects where the gap is being plugged most, in many cases, rely on EdTech to be taught effectively – such as an app to assist learning in IT.

The top subjects that teachers have spent their own money on resources for: 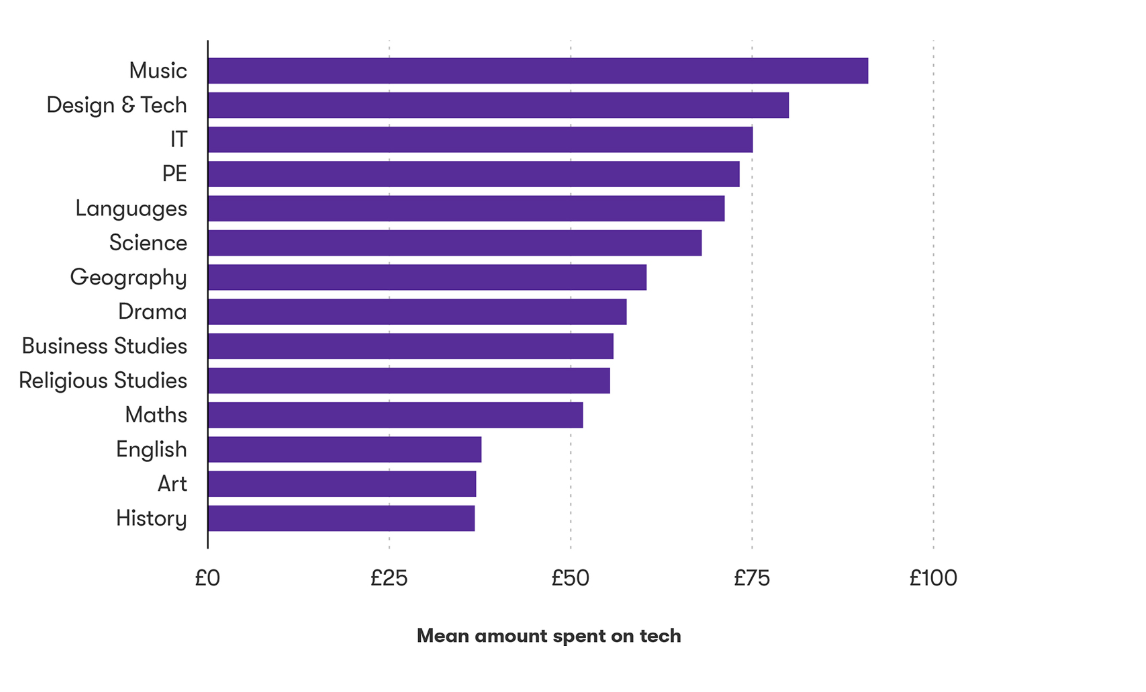 The findings of the report reveal that more needs to be done to ensure UK schools and colleges have enough access to EdTech; but some areas are more in need than others. Northern Ireland, for example, is falling behind as 3 in 4 (75%) teachers said the children they teach don’t have enough access to educational technology.

What is the most well-funded EdTech in schools?

Supplies for school lessons at one point in time would have consisted of pens, pencils and a ruler but with the growth of technology and the need for more advanced classroom essentials, the cost of supplies has grown too. But what do we mean by EdTech and which items are being funded the most? Our survey findings show that there has been a steady rise in the use of technology over the years, with almost 4 in 5 teachers (79%) now using it in almost every lesson.

Figure 2. Most well-funded edtech in schools.

Learning apps have become a huge part of education along with computers, and other digital devices including iPads, but where is the funding going? Despite the lack of funding for EdTech, teachers in the survey still believed that their school had received new or significantly improved versions of a variety of tech over the past three years, with more than half of all teachers citing improved learning apps (56%) and desktop computers (54%) in the classroom.

The survey found that no matter the type of school, at least half (60%) of all teachers – be it public, academy, private or specialist teachers – agreed that there’s not enough funding for EdTech within their school. Over half (54%) of all teachers also said that funding and resources for EdTech has been cut at their school leaving some regions and schools behind. There’s some good news for teachers and students though, as a £4.6 million funding programme has been unveiled by the Department for Education (DfE) to test EdTech in classrooms in the hope that this will kick start innovation and de-risk future investment by technology suppliers, as well as schools.

A spokesperson from RS Components comments:

“With more than 1 in 10 (14%) teachers admitting they’ve never heard of EdTech and 36% saying they have heard of it but don’t know what it is, it’s clear that teachers need more training and support to ensure that pupils are receiving the maximum impact of how technology can improve education.

“RS Components is passionate about supporting schools in implementing EdTech and has introduced robot-based learning into schools which provides engaging activities and lesson plans for STEAM (science, technology, engineering, art, and mathematics) learning.

“Whilst EdTech is hugely important in schools, it shouldn’t be left to teachers to plug the gap that a lack of funding has left behind, and it is a concerning finding that 37% of teachers have resorted to spending on average £40 of their own money 0n EdTech supplies for their pupils.

“Teachers must be given the correct training and resources in order to help inspire their pupils towards a vast number of careers that depend on technology, to give each child a fair chance and opportunity to succeed in a role of their choice in the future.”

The Looming Financial Nightmare: So Much for Living the American Dream