Fast food is a supersized business in America.

The average American spends as much as $1,200 every year on fast food — and roughly a quarter of the U.S. population eats three or more fast food meals per week.

Today’s unique infographic, via TitleMax, shows just how dominant the quick serve food industry is, and which brands are leading the pack in terms of revenue and store locations. 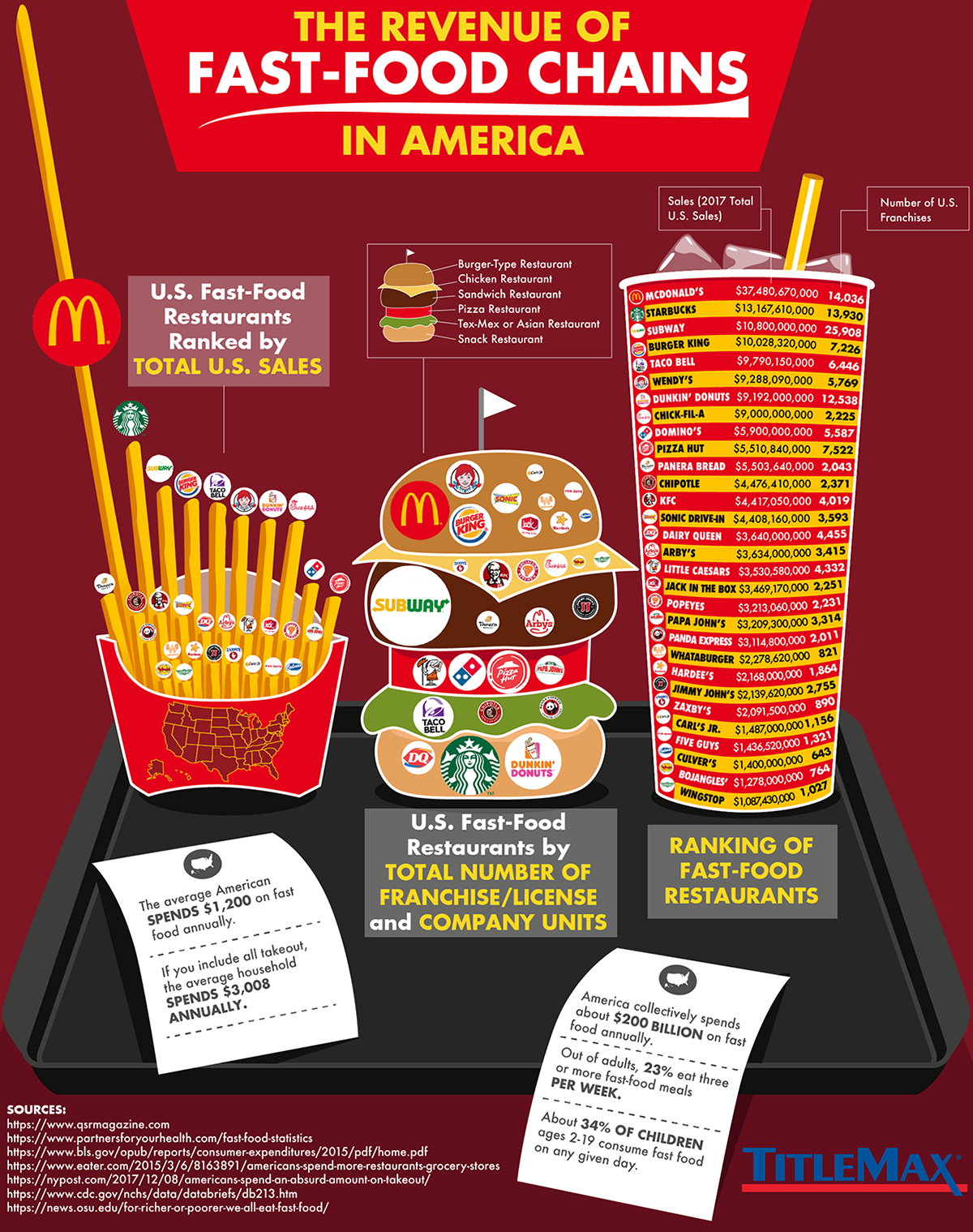 All of the biggest fast food chains now top $1 billion in sales annually. McDonald’s leads the pack with almost triple the sales of the number two chain, Starbucks.

Below are the top 30 fast food chains in the United States by revenue:

Showing 1 to 10 of 30 entries
PreviousNext

In 2017, the top 30 fast food chains rang up $172 billion in sales at over 140,000 locations across the United States. When smaller chains are also included, annual industry revenue tops a whopping $200 billion.

Fast food can be a profitable business, but certain chains are runaway successes when sales-per-unit are considered. Chick-fil-A’s sales average out to $4.3 million per location — 53% higher than McDonald’s, which brings in $2.8 million of sales per location.

Subway, which is known for having a low franchise fee and no exclusive territory rights, has the lowest sales-per-unit in the top 30 ($419,792).

That said, no one can compare to Subway in terms of sheer volume. The chain has over 25,000 locations, making it not only the biggest fast food chain in the country, but the most common retailer overall (even beating out dollar stores). It’s possible that America has seen peak Subway though — the number of locations has been steadily dropping since 2011.

On the opposite end of the spectrum is Starbucks. The Seattle-based coffee chain has been relentlessly expanding over the past decade.

Of course, not all fast food chains have the ubiquity of Subway and McDonald’s. Many of these brands have achieved impressive sales numbers in specific regions. Whether you’re loyal to Dunkin’ Donuts, Chick-fil-A, or In-N-Out may depend heavily on where you live.

Will America’s next big fast food powerhouse come from an already-strong regional chain, or will it be the result of a new phenomenon, completely?

First published on the Visual Capitalist. Photo by Jonathan Borba from Pexels.

In Defence of the Australian Higher School Certificate

Are You Ready to Have Your Civil Liberties Severely Restricted? Because That Is Where This Thing Is Headed…

‘How Dangerous Is COVID-19?’ and Other Frequently Asked Questions (FAQs) about the Coronavirus Outbreak