Somewhere along the road of America’s development, corporations were blessed with not only ‘personhood,’ but with the power to sanction what sort of messages were permissible to enter the public realm. Let’s be clear: This sort of corporate control, which borders on pure fascism, has no place in a democracy.

“Congress shall make no law respecting an establishment of religion, or prohibiting the free exercise thereof; or abridging the freedom of speech, or of the press; or the right of the people peaceably to assemble, and to petition the Government for a redress of grievances.”

So how did it come to be that such a straightforward and unambiguous command has become so unattainable in reality? 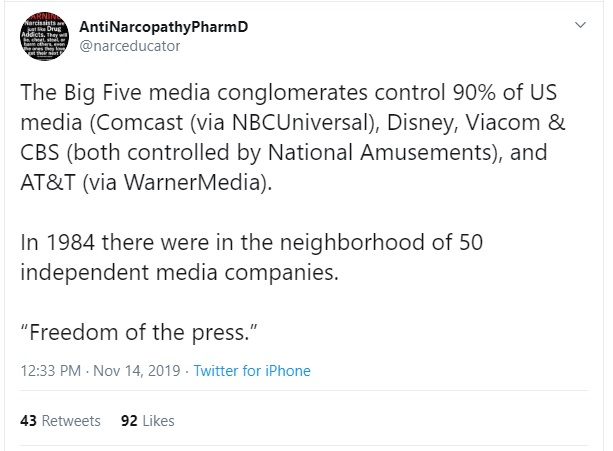 The primary source of our current plight is that the Founding Fathers had no idea to what degree corporations would come to dominate every square inch of our public and private lives. Had they been somehow forewarned of the approaching pirates just over the horizon with serious political axes to grind, there is no doubt they would have adjusted the Constitution’s sails to prepare for the invasion. Alas, such farsightedness was far beyond the psychic powers of any individual at the time.

Today, the situation with regards to corporate power has become so out of control that only the ‘person’ of the corporation is truly endowed by its creator with the full power of speech. These omnipotent ‘arbitrators of truth’ – i.e. their truth – are now controlled by five kingdoms (down from its previous six thanks to the marriage between Viacom and CBS) known as Comcast, Walt Disney, News Corporation, Warner Media and ViacomCBS, each one of which has many dozens of obedient subsidiaries under their wing.

Now we must ask: how likely is it for the average American to achieve some semblance of ‘freedom of speech’ from any one of these media powerhouses? While we consumers are all endowed with the ‘inalienable right’ to freely purchase the services from any one of these vast entities, our ability to have our individual voices disseminated from one of their hundreds of various channels is laughable. Aside from the occasional letter to the editor or guest column, the ‘power of the people’ in the face of these corporate overlords is solely that of emasculated passive spectator. This is a fact of life that popular politicians like Ron Paul and Tulsi Gabbard and their loyal followers have come to learn the hard way. 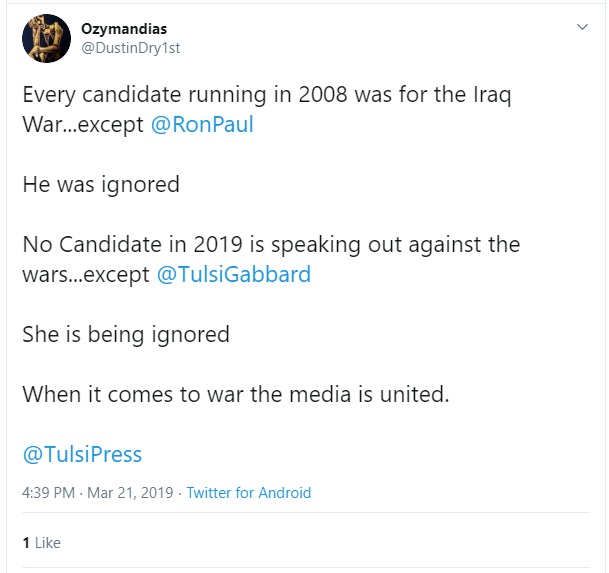 And much like in the political realm, the variety of messages available is deceptively wide and dangerously shallow, while the holy grail of the ‘editorial slant’ is obsessively guarded from any and all apostates. Amid such medieval conditions, the individual who hopes to have his voice heard in the public realm may wish to take the social media route courtesy of Google, YouTube, Facebook or Twitter. Here too our lonely nomad – especially if he is of a more conservative bent – will run headlong into an impenetrable wall known as censorship or being ‘shadow banned’.

Behind the walls of these Silicon Valley fortresses, engineers monkey with algorithms in ways that we mere mortals can only imagine. Yet thanks to a few courageous inside dissenters (here and here), as well as accidental ‘squealers,’ we have managed to catch a glimpse behind the iron curtain. In a nutshell, it provides a less-than-glowing picture that has nothing in common with democratic principles. At the same time, Google, as the primary ‘arbitrator of truth’ these days, has taken it upon itself to literally rewrite the history books according to the gospel of liberalism. If you don’t believe it, just do a Google search on ‘White American inventors’ and that will tell you everything you need to know. 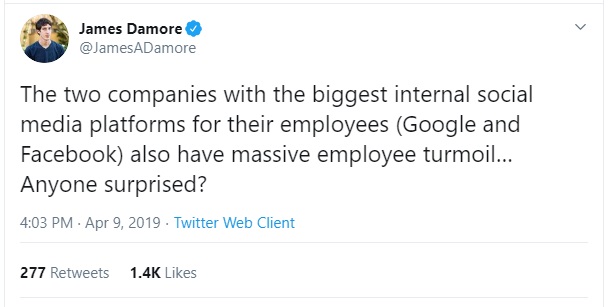 These infinitely powerful IT companies, which have partnered up with notoriously biased, anti-conservative organizations, like the ADL and Southern Poverty Law Center, have no business censoring their users. These platforms, protected under Section 230 of the Communications Decency Act of 1996, are designed as vehicles for posting ideas, however wild or even conspiratorial they may appear to some observers. In other words, the platforms are not traditional publishers in the sense that they are legally responsible for the content that appears on their sites. In the event that they ban or alter the meaning of the content, they are liable to lose the protections they have been granted under Section 230. So long as the user of the platform is not calling for violence, their views, according to the First Amendment, have every right to be heard.

Those privileges enjoyed by the social media titans were called into question this week when none other than President Donald Trump had his social media posts challenged by Twitter – twice. 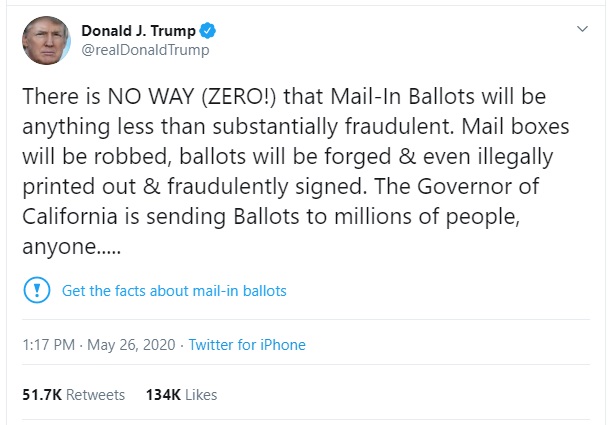 The U.S. leader wrote on Twitter to his 80 million followers, “There is NO WAY (ZERO!) that Mail-In Ballots will be anything less than substantially fraudulent. Mail boxes will be robbed, ballots will be forged & even illegally printed out & fraudulently signed….” to which Twitter attached a memorandum below the message advising readers to “Get the facts about mail-in ballots,” with a link that ‘debunked’ what Trump had written.

On May 29, as protests against the death of George Floyd began to spiral out of control, Trump warned in a tweet that “Any difficulty and we will assume control but, when the looting starts, the shooting starts.” Twitter on this occasion took the unprecedented step of hiding his tweet behind a message that accused Trump of “glorifying violence.”

This should be a wake-up call to all Americans – especially as millions of people are struggling to get accurate information on the coronavirus, as well as spreading riots – that if the U.S. president is having trouble securing his freedom of speech, the chances for the average person is practically nonexistent.

Although Trump has moved to lift the protections that the social media behemoths now enjoy, it remains to be seen whether that action will improve the chances for freedom of speech in the land of liberty, or just drive it further underground. Whatever the case may be, the prospects do not look promising for the First Amendment, and therein lies the worst crisis facing the American people today.

Robert Bridge is an American writer and journalist.

Harper: A Tale of Two Protests in Baghdad

US Coronavirus Cases Double in Less Than 48 Hours, and “Everyone Else Will Be Italy in 9-14 Days’ Time”