The monetary ‘moon shot’ taken by the Federal Reserve two weeks ago – in which they committed to adding an historic amount of liquidity to the markets – appears to have set the stage for some potentially nasty price inflation in the coming weeks and years.

In the near term, it appears some food prices are rising dramatically. Robert Wenzel explains why he thinks the first signs are happening:

The Federal Reserve is pumping massive amounts of new money into the economy and, at the same time, the production of goods and services has declined. Less supply and more monetary demand is a prescription for higher prices.

The Fed ‘moon shot’, plus the economic shutdown, sure seem like a one-two punch that could send prices soaring.

Wenzel adds further that these price increases “at first may not be reflected in government price indexes.” So even when the official update for CPI inflation in March finally posts, it may not yet account for these initial increases in the price of food.

Looking at the price of eggs from official data at the Department of Agriculture, you can see the jump in prices compared to 2019: 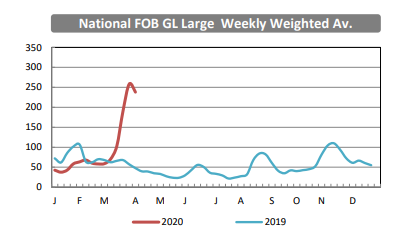 Of course, eggs are only one of many food items, but the increase in average price is staggering.

Sticking with this example, Wenzel also pointed out a potential longer-term ripple effect of the economic shutdown thanks to COVID-19:

It takes four to five months to raise a hen to egg-laying age, and few farmers so far plan to build new barns or significantly expand their flocks in response to the coronavirus-driven demand surge.

It is understandable that farmers, who are worried about the current economic conditions in the U.S., would be hesitant to invest in expansion of their farms.

But another way prices could stay on the rise is through a reduction in discounts.

In this case, the food you normally buy at a discounted price would first return to normal pricing, then increase as time goes on. Analysts at JPMorgan recently shined a light on the trend:

In a normal environment, reduced discounts — that is, higher prices — would lead to lower volumes, but we are not in normal times… We think elasticity will be minimal as long as food-at-home is benefiting from COVID-19 to this degree.

Discounted prices that return to normal would normally drive customers away, but when demand remains the same, higher prices mean more profit for grocery stores.

That trend could continue as long as the COVID-19 outbreak keeps driving demand. In fact, the outbreak is already driving price gouging in some areas.

According to Penn Live, “State officials have investigated roughly 3,300 reports of price gouging as Pennsylvania residents and retailers alike grapple with supply shortages during the coronavirus.”

Ohio, New York, California, and Amazon all are dealing with price gouging on grocery items thanks to the virus.

This is Just the Beginning

A USDA report highlights the potential for food prices to increase into 2020. According to the most recent year-over-year summary:

Who knows exactly how high the increase in food prices will end up? Food is a volatile category for inflation. There is just as much potential for prices to drop, as there is for those prices to skyrocket.

But keep in mind, this is just the beginning of the inflationary ripple effects from the coronavirus outbreak — which likely won’t be reported in March’s official inflation rate.

These are strange times indeed. With each passing day, the U.S. is going deeper and deeper into uncharted territory while it deals with the inflationary fallout from the COVID-19 outbreak and the resulting lockdowns.

And right now, if the Fed (or the Bureau of Labor and Statistics) revealed the “real” inflation rate, the market would likely panic. People would start to see the dollar’s true buying power going up in smoke, and that could potentially trigger a Depression.

So, no matter what comfortable story the Fed wants to tell, be sure to do your own homework. And prepare yourself by hedging your bets with physical assets like gold and silver, before the U.S. becomes an “Inflation Nation.”

Picture by Alison Marras via Unsplash.

Detect, Deter and Annihilate: How the Police State Will Deal with a Coronavirus Outbreak