Searchlight New Mexico’s disturbing report about threat assessments in the Albuquerque Public School (APS) system should serve as a wake-up call to everyone.

The report reveals that schools across the country have been giving students threat assessments for at least twenty years. Which should come as no surprise to my readers. Three years ago, I wrote about the dangers of using threat assessments on pre-school kids all the way through college.

What is happening in the APS system is enough to make even the most ardent supporter of threat assessments reconsider how schools use them.

The report reveals how Agatha Cooper’s 7-year-old autistic son, Jamari Nelson has been deemed a “high level threat” by the APS system.

The “assessment” team concluded Jamari was a “high level threat.” and he displayed “high violence potential.”

When Searchlight asked for information about how the school system classifies students as high-level threats, they refused to divulge any information citing federal privacy laws.

When an entire school system targets and classifies special-ed students and minority children as “threats” for three consecutive years, everyone should take notice. 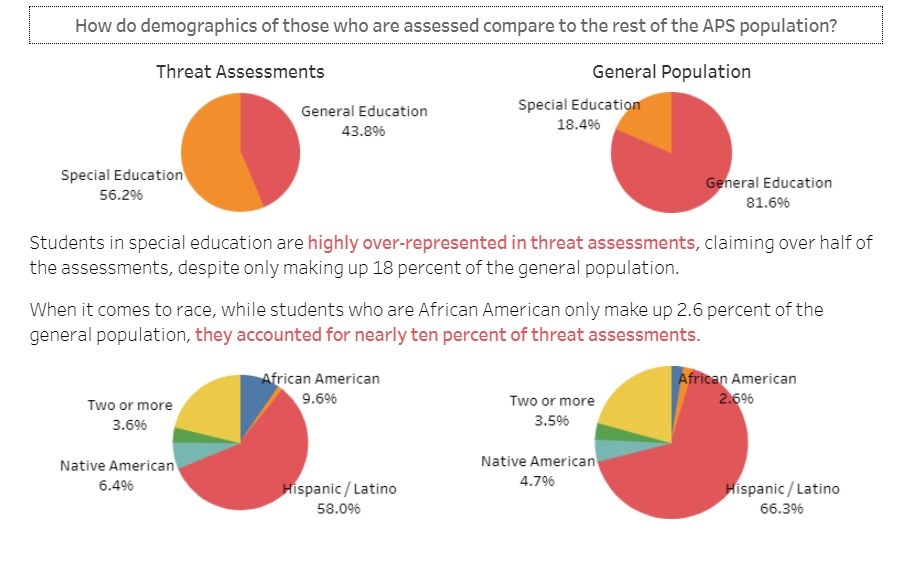 “During the 2018-19 school year, APS carried out 834 threat assessments, according to district data. It was the third consecutive year in which a disproportionate number of the assessments were conducted on special education students and African-American children.”

Does anyone really think there are 834 special-ed or African-American “high level threats” in one school system?

Searchlight warns that, “Jamari’s predicament illustrates a systemic problem in Albuquerque and serves as a warning to schools nationwide.”

Just like Red Flag laws unqualified people, like school resource officers can label anyone a “potential threat”, which has long-term consequences. As Searchlight warned, threat assessments have become so commonplace it stigmatizes whole groups of kids.

“School districts around the country have implemented threat assessment procedures that can stigmatize whole groups of students, most notably kids with disabilities. That’s precisely what’s occurring in Albuquerque, where these assessments have become commonplace — and where Jamari’s evaluation could remain on his school records for years to come.”

The APS could care less if a student is wrongfully labeled a “high-level threat” as evidenced by their response.

APS spokesperson Monica Armenta said in an email that “while the presence of a threat assessment might be considered a stigma, APS’s priority is to provide safety for the student and the APS community. To the extent a threat assessment was conducted, APS believes that having that information available outweighs any possible stigma that may result.”

In a separate story, Searchlight revealed that APS is also secretly putting autistic children as young a six years old in seclusion and restraints. Urijah Salazar an autistic elementary school student has been placed in restraints or been put in seclusion 150 times in four years.

Restraining kids for nervous mannerisms, raising their voices or swearing? What has happened to our school system?

I feel that turning special-ed kids into “high level threats” is abhorrent and every parent should be screaming that our school systems have gone too far.

A statement by the ACLU, over a recent No-Fly list Appeals Court ruling, explains why everyone should be concerned about schools hiding behind federal privacy laws.

“This decision lets the government hide behind overblown secrecy claims to deny our clients’ constitutional right to due process,” said Hina Shamsi, director of the ACLU’s National Security Project.

Why are we allowing authorities to hide behind secrecy laws, while they treat our kids like criminals?

If we do nothing and just stand on the sidelines and watch, it won’t just be special-ed students and minorities who are treated like criminals and given threat assessments.

This work by Massprivatei is licensed under a Creative Commons Attribution-NoDerivatives 4.0 International License and may be reposted as is, with attribution to the author Massprivatei.blospot.com.