All across America, store shelves are emptying and people are becoming increasingly frustrated because they can’t get their hands on needed supplies.  Most Americans are blaming “hoarders” for the current mess, but it is actually much more complicated than that.  Normally, Americans get a lot of their food from restaurants.  In fact, during normal times, 36 percent of all Americans eat at a fast food restaurant on any given day.  But now that approximately 75 percent of the U.S. is under some sort of a “shelter-in-place” order and most of our restaurants have shut down, things have completely changed.  Suddenly our grocery stores are being flooded with unexpected traffic, and many people are buying far more than usual in anticipation of a long pandemic.  Unfortunately, our food distribution systems were not designed to handle this sort of a surge, and things are really starting to get crazy out there.

I would like to share with you an excerpt from an email that I was sent recently.  It describes the chaos that grocery stores in Utah and Idaho have been experiencing…

When this virus became a problem that we as a nation could see as an imminent threat, Utah, because of its culture of food storage and preparing for disaster events seemed to “get the memo” first. The week of March 8th grocery sales more than doubled in Utah, up 218%. Many states stayed the same with increases in some. Idaho seemed to “get the memo” about four days later. We were out of water and TP four days after Utah. Then we were out of food staples about four days later. Next was produce following a pattern set by Utah four days earlier.

The problem for us in Idaho was this. The stores in Utah were emptied out then refilled twice by the warehouses before it hit Idaho. Many of these Utah stores have trucks delivering daily. So when it did hit Idaho the warehouses had been severely taxed. We had a hard time filling our store back up even one time. We missed three scheduled trucks that week alone. Then orders finally came they were first 50% of the order and have dropped to 20%. In normal circumstances we receive 98% of our orders and no canceled trucks. Now three weeks later, the warehouses in the Western United States have all been taxed. In turn, those warehouses have been taxing the food manufacturers. These food companies have emptied their facilities to fill the warehouses of the Western United States. The East Coast hasn’t seemed to “get the memo” yet. When they do what food will be left to fill their warehouses and grocery stores?

Food distribution and resources for the Eastern United States will be at great peril even if no hoarding there takes place. But of course it will.

Additionally the food culture of the East Coast and other urban areas is such that people keep very little food on hand. They often shop several times weekly for items if they cook at home. They don’t have big freezers full of meat, home canned vegetables in their storage rooms, gardens, or beans, wheat, and rice in buckets in the their basements.

With most of the country locked down, normal economic activity has come to a standstill, and it is going to become increasingly difficult for our warehouses to meet the demand that grocery stores are putting on them.

Meanwhile, our farmers are facing severe problems of their own.  The following comes from CNBC…

The U.S.-China trade war sent scores of farmers out of business. Record flooding inundated farmland and destroyed harvests. And a blistering heat wave stunted crop growth in the Midwest.

Now, the coronavirus pandemic has dealt another blow to a vulnerable farm economy, sending crop and livestock prices tumbling and raising concerns about sudden labor shortages.

The chaos in the financial markets is likely to continue for the foreseeable future, and it is going to remain difficult for farm laborers to move around as long as “shelter-in-place” orders remain in effect on the state level.

Iowa farmer Robb Ewoldt told reporter Emma Newburger that “we’ve stopped saying it can’t get worse”, and he says that this coronavirus pandemic looks like it could be “the straw that broke the camel’s back”…

“We were already under extreme financial pressure. With the virus sending the prices down — it’s getting to be the straw that broke the camel’s back,” said Iowa farmer Robb Ewoldt.

“We were hoping for something good this year, but this virus has stopped all our markets,” he said.

Of course this comes at a time when millions of Americans are losing their jobs and unemployment is shooting up to unthinkable levels.  Without any money coming in, many people are already turning to alternative sources of help in order to feed themselves and their families.

On Monday, hundreds of cars were lined up to get food from a food bank in Duquesne, Pennsylvania.  To many, this was eerily reminiscent of the “bread lines” during the Great Depression of the 1930s. 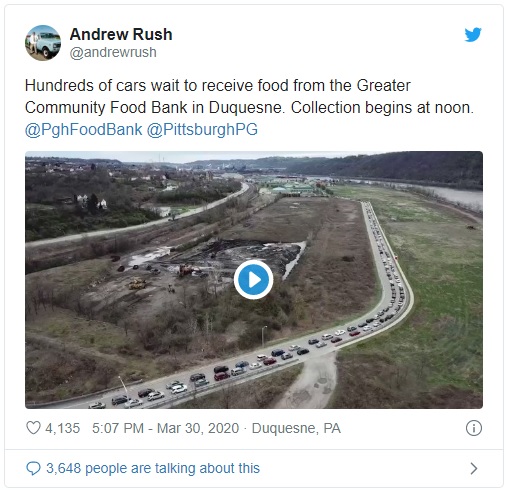 And it is also being reported that the number of people coming for free meals on Skid Row in Los Angeles has tripled since that city was locked down.

Sadly, these examples are likely only the tip of the iceberg of what we will see in the months ahead.

And it won’t just be the U.S. that is hurting.  The following comes from a Guardian article entitled “Coronavirus measures could cause global food shortage, UN warns”…

Kazakhstan, for instance, according to a report from Bloomberg, has banned exports of wheat flour, of which it is one of the world’s biggest sources, as well as restrictions on buckwheat and vegetables including onions, carrots and potatoes. Vietnam, the world’s third biggest rice exporter, has temporarily suspended rice export contracts. Russia, the world’s biggest wheat exporter, may also threaten to restrict exports, as it has done before, and the position of the US is in doubt given Donald Trump’s eagerness for a trade war in other commodities.

If this pandemic stretches on for an extended period of time, food supplies are inevitably going to get even tighter.

So what can you do?

Well, perhaps you can start a garden this year if you don’t normally grow one.  Apparently this pandemic has sparked a tremendous amount of interest in gardening programs around the country…

To help citizens who want to grow their own food, the university kindly made their online vegetable gardening course free until the end of April. OSU’s post on Facebook has been shared over 21,000 times.

Food is only going to get more expensive from here on out, and growing your own food is a way to become more independent of the system.

But if you don’t have any seeds right now, you may want to hurry, because consumer demand is spiking…

“It’s the largest volume of orders we have seen,” said Jere Gettle of Baker Creek Heirloom Seeds in Mansfield, Missouri. Peak seed-buying season for home gardeners is January to March, but the normal end-of-season decline in orders isn’t happening.

Customers are gravitating to vegetables high in nutrients, such as kale, spinach and other quick-to-grow leafy greens. “Spinach is off the charts,” said Jo-Anne van den Berg-Ohms of Kitchen Garden Seeds in Bantam, Connecticut.

For years, I have been warning people to get prepared for “the perfect storm” that was coming, but of course most people didn’t listen.

But now it is upon us.

Desperate people have been running out to the grocery stores to stock up on toilet paper only to find that they are limited to one or two packages if it is even available.

And now that “panic buying” of seeds has begun, it is probably only a matter of time before many stores start running out.

We have reached a major turning point in our history, and things are only going to get crazier.

Unfortunately, the vast majority of Americans still have absolutely no idea what is ahead of us…

About the Author: I am a voice crying out for change in a society that generally seems content to stay asleep. My name is Michael Snyder and I am the publisher of The Economic Collapse Blog, End Of The American Dream and The Most Important News, and the articles that I publish on those sites are republished on dozens of other prominent websites all over the globe. I have written four books that are available on Amazon.com including The Beginning Of The End, Get Prepared Now, and Living A Life That Really Matters. (#CommissionsEarned) By purchasing those books you help to support my work. I always freely and happily allow others to republish my articles on their own websites, but due to government regulations I need those that republish my articles to include this “About the Author” section with each article. In order to comply with those government regulations, I need to tell you that the controversial opinions in this article are mine alone and do not necessarily reflect the views of the websites where my work is republished. The material contained in this article is for general information purposes only, and readers should consult licensed professionals before making any legal, business, financial or health decisions. Those responding to this article by making comments are solely responsible for their viewpoints, and those viewpoints do not necessarily represent the viewpoints of Michael Snyder or the operators of the websites where my work is republished. I encourage you to follow me on social media on Facebook and Twitter, and any way that you can share these articles with others is a great help.  During these very challenging times, people will need hope more than ever before, and it is our goal to share the gospel of Jesus Christ with all many people as we possibly can.

Picture by 2C2K Photography from Houston, TX, USA / CC BY.

Harper: Angry and Shrill ‘Scholars’ Not What Was Needed