In our increasingly secular society, it is more important than ever to follow the command in 1 Peter 3:15 to be ready to “make a defense to anyone who asks you for a reason for the hope that is in you.”

When the person making such a defense also happens to be a political leader in said secular society, like Texas Governor Greg Abbott, we must rejoice and praise God!

In late November, Gov. Abbott shared an inspirational video on Twitter of a man in a wheelchair deftly scaling a rock climbing wall.

Abbott, wheelchair-bound himself after an accident in 1984, captioned the video, saying, “Never quit. Never give up. Overcome any challenge.” 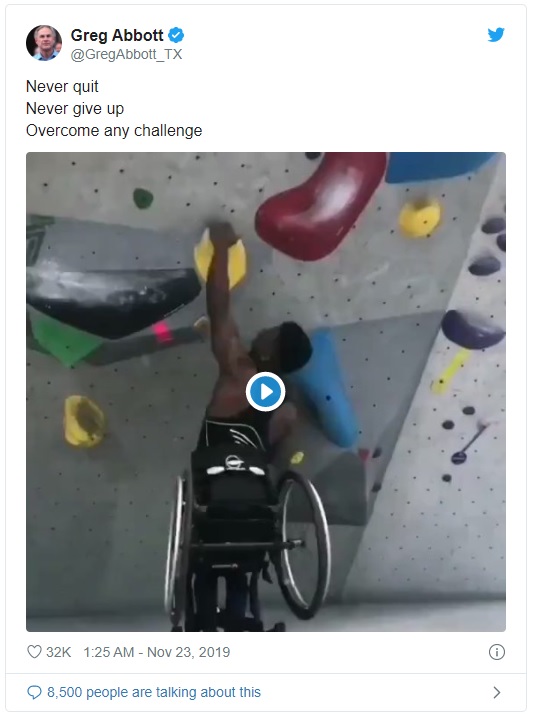 While the video garnered hundreds of positive comments and over 32,000 likes, one man had this to say: 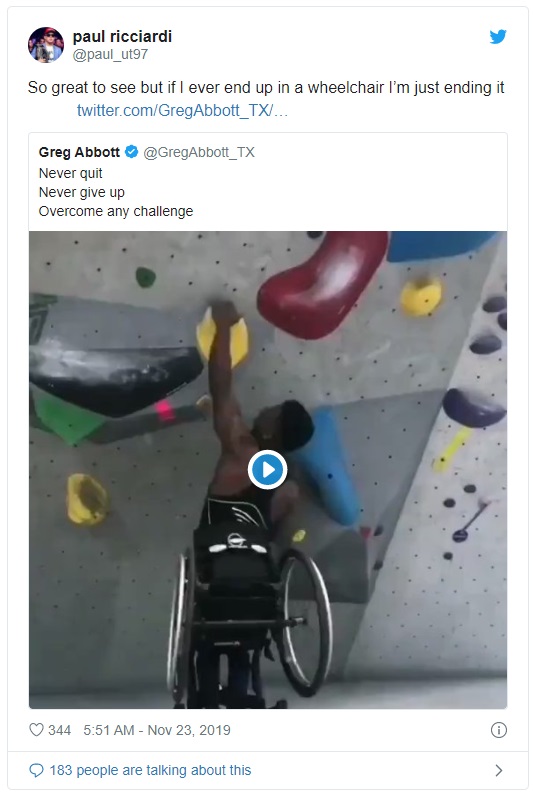 While many were quick to denounce the tweet and call its author ignorant and weak, Gov. Abbott offered a very thoughtful response. “That’s what I thought before I ended up in a wheelchair,” Abbott said. “I’ve done more AFTER the accident that left me paralyzed than before that accident. With God all things are possible.”

Never too shy to spit in the face of their Creator, atheists fired back at Abbott, stating that “God put [him] in a wheelchair.”

Continuing to glorify God and respond with sheer class, Abbott educated the detractor, who has clearly never read the book of Job, if any scripture at all, declaring that “God didn’t cause the accident that left [him] paralyzed, but He did help [him] persevere over that enormous challenge.”

“I’m a testament that the glory of God is revealed by a young man’s back being broken in half and still rising up to be Governor of Texas,” Abbott continued. “With God all is possible.”

Dissatisfied with this spot-on response, yet another atheist dog-piled on Abbott, finding it amusing that Christians “praise God for the good things in their life, but find every possible excuse to absolve him of the bad things.”

Once more, Gov. Abbott gave an answer for his unshakable hope with the “gentleness and respect” called for in 1 Peter, explaining to the atheist that “THE purpose of life is to build a relationship with God.”

“Just like in any relationship, both good & bad things happen in our lives,” Abbott continued. “The thing about a relationship with God is that bad events bring us closer to God. God’s limitless love helps us rise above life’s challenges.” 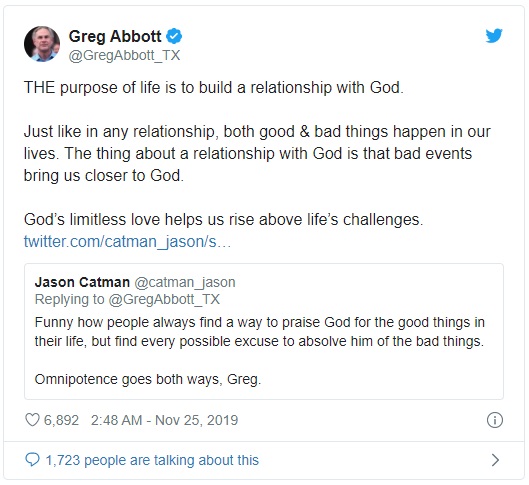 Amen!! Folks, this is why we must not become sleepy and complacent in our faith.

Gov. Abbott has demonstrated an exemplary attitude of glorifying God in every trial, even those in which the lost see no reason for rejoicing.

Why Do More Men Die from Coronavirus than Women?