If you think back almost 12 months, you’ll remember that the markets opened the year with extreme levels of volatility.

Stocks had just finished the worst year in a decade. Then in early January, Apple cut its earnings guidance after the company had already lost over $400 billion in market capitalization. The S&P 500 and DJIA seesawed, suggesting that the lengthy bull run could come to an end. 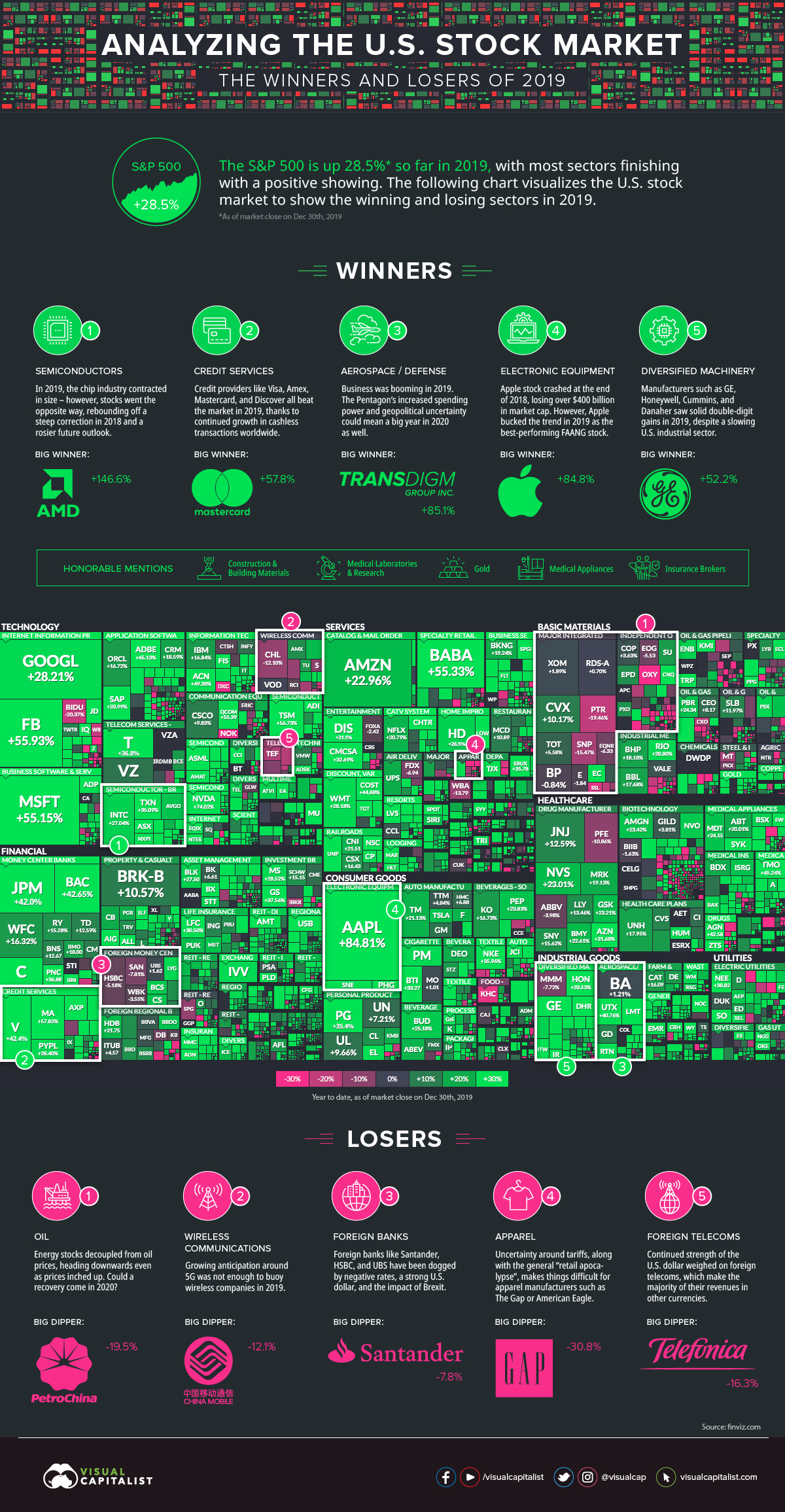 Today’s infographic pulls data from Finviz.com. We’ve taken their great treemap visualization of U.S. markets and augmented it to show the sectors that beat the frothy market in 2019, as well as the ones that lagged behind.

Below, we’ll highlight instances where sectors stood out as having companies that, with few exceptions, saw ubiquitously positive or negative returns.

1. Semiconductors
Semiconductor stocks soared in 2019, despite sales expected to shrink 12% globally. Although this seems counterintuitive at first glance, the context helps here: in 2018, there was hefty correction in the market – and the future outlook for the industry has also been revised to be rosier.

2. Credit Services
In case you didn’t get the memo, the world is increasingly going cashless — and payments companies have been licking their lips. Mastercard, Visa, American Express, Capital One, and Discover were just some of the names that outperformed the S&P 500 in 2019.

3. Aerospace / Defense
The vast majority of companies in this market, including Lockheed Martin, Raytheon, and United Technologies, all beat the market in 2019. One notable and obvious exception to this is Boeing, a company that saw its stock get hammered after the Boeing 737 Max model was grounded in the wake of several high-profile crashes.

4. Electronic Equipment
Apple shareholders had a bit of a wild ride in 2018. The company had risen in value to $1.1 trillion, but then it subsequently lost over $400 billion in market capitalization by the end of the year. Interestingly, in 2019, the stock had a strong bounce back year: the stock increased 84.8% in value, making it the best-performing FAANG stock by far.

5. Diversified Machinery
Manufacturers such as Honeywell, General Electric, Cummins, and Danaher saw solid double-digit gains in 2019, despite a slowing U.S. industrial sector. For GE in particular, this was a bit of a comeback year after its stock was decimated in 2018.

1. Oil
Big oil, independent oil, and many oil services companies all had a year to forget. While this is not unusual in a highly cyclical industry, what is strange is that this happened in a year where oil prices (WTI) increased 36% for the best year since 2016.

2. Wireless Communications
Growing anticipation around 5G was not enough to buoy wireless companies in 2019.

3. Foreign Banks
It’s a tough environment for European banks right now. Not only is it late in the cycle, but banks are trying to make money in an environment with negative rates and large amounts of Brexit uncertainty. The strong U.S. dollar doesn’t help much, either.

4. Apparel
The CEO of The Gap has described U.S. tariffs as “attacks on the American consumer”, providing just another nail in the coffin to the bottom line of the retail industry. Given these additional headwinds, it’s not surprising that companies like The Gap, American Eagle, Nordstrom, Urban Outfitters, and Abercrombie & Fitch all finished the year in the red.

5. Foreign Telecoms
Continued strength of the U.S. dollar weighed on foreign telecoms, which make the majority of their revenues in other currencies.

Is Oil the Canary in the Coal Mine for a $640 Trillion Derivatives Disaster?