It might be time to call NASA because the Federal Reserve has recently increased its balance sheet so fast that the resulting line chart could be mistaken for a monetary “moon shot.”

In an unprecedented move, the Fed’s balance sheet has “gone vertical,” shooting up to an astounding $4.67 trillion.

Notice also the Fed now has more assets on its balance sheet than any other time in history. Which brings up an important question…

Exactly what is the Fed adding a historic amount of liquidity for?

The Federal Reserve claims to be preventing a global recession, putting most of the blame on COVID-19. But as with most things related to the Fed, there is more to the story.

Wolf Richter thinks an “everything bubble” is inflating again:

It’s as if the QE unwind – that drop-off in assets from early 2018 through July 2019 – had never happened. And the steepness of the new spike shows just how panicked the Fed is about the sudden collapse of its super-bloated masterwork, the Everything Bubble that it had spent a decade inflating.

He goes further to highlight the fact that repo market liquidity is tightening again, spurring the Fed to react, as illustrated here: 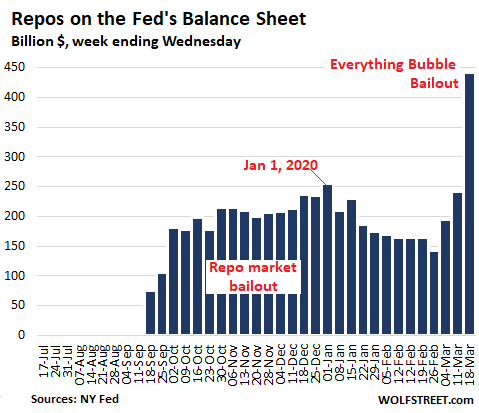 Wolf concludes by highlighting the potential for the Fed to start buying up mortgage backed securities again. If that happens, it would represent yet another part of the “everything bubble” inflating.

So where does that leave the average retirement saver or investor?

The Potential Impact from Piles of Fed “Printed Money”

With all of this money from the Fed flying around, you have the potential for hyperinflation and stagflation, among other things.

For stagflation, you generally need three things: slow growth, high unemployment, and high inflation. With lockdowns across the country due to COVID-19, unemployment claims are on the rise and growth has likely slowed (although official GDP hasn’t been updated yet).

Official inflation has been on the rise since October 2019, currently sitting at 2.3% as of February, and likely to be even higher once the official rate is updated for March 2020. Of course, “real” inflation, using methodologies dropped since the 1990s, shows inflation closer to 6%.

If that “real inflation” were reported widely in the media, the markets may be even more uncertain than they are now.

Hyperinflation also remains a possibility. Rapidly rising inflation and a falling dollar may trigger the Fed to raise rates, just like they did in the 1980s.

The Fed’s balance sheet has jumped so high, so fast, it’s possible inflation will follow suit just based on that signal alone.

Who knows how high it will end up once the March update comes in? Fingers crossed that the U.S. doesn’t have a repeat of what happened in the 1980s.

Your Retirement Could Be Sitting on an Inflation “Powder Keg”

If the Fed and other factors trigger the wrong events with its “unlimited QE” approach to calming the markets, serious inflation (or stagflation) may happen again. On the chance that that happens, you’ll want to be prepared with assets that can protect your savings.

Holding assets such as physical gold and silver, which generally fare well during market turmoil and times of inflation, could help safeguard your retirement.

Michael Snyder: Why the Meat Shortages Are Going To Be Much Worse Than Most Americans Are Anticipating

Is the United States Able to Handle COVID-19? Global Prospects Hang on This Question

John Douce: Why the European Union’s COVID-19 Response Is Ineffective

Michael Snyder: The US Response to this Coronavirus Outbreak Has Been Horrifyingly Bad

Contact Tracing: Your Governors, Red or Blue, Are Coming After You