Rojava is dead. Long live the Syrian Arab Republic. The new Russia-Turkish agreement goes a long way in reestablishing Syria’s territorial integrity and foiling Erdogan’s dream of a new Ottoman Empire. It also provides the Rojava Kurds their best hope for a future whether they realize it or not. First, here’s the agreement.

President of the Republic of Turkey, Recep Tayyip Erdogan and President of The Russian Federation, Vladimir Putin agreed on the following points:

1. The two sides reiterate their commitment to the preservation of the political unity and territorial integrity of Syria and the protection of national security of Turkey.

2. They emphasize their determination to combat terrorism in all forms and manifestations and to disrupt separatist agendas in the Syrian territory.

3. In this framework, the established status quo in the current Operation Peace Spring area covering Tel Abyad and Ras Al Ayn with a depth of 32 km will be preserved.

5. Starting 12.00 noon of October 23, 2019, Russian military police and Syrian border guards will enter the Syrian side of the Turkish-Syrian border, outside the area of Operation Peace Spring, to facilitate the removal of YPG elements and their weapons to the depth of 30 km from the Turkish-Syrian border, which should be finalized in 150 hours. At that moment, joint Russian-Turkish patrols will start in the west and the east of the area of Operation Peace Spring with a depth of 10 km, except Qamishli city.

6. All YPG elements and their weapons will be removed from Manbij and Tal Rifat.

7. Both sides will take necessary measures to prevent infiltrations of terrorist elements.

8. Joint efforts will be launched to facilitate the return of refugees in a safe and voluntary manner.

9. A joint monitoring and verification mechanism will be established to oversee and coordinate the implementation of this memorandum.

10. The two sides will continue to work to find a lasting political solution to the Syrian conflict within Astana Mechanism and will support the activity of the Constitutional Committee. 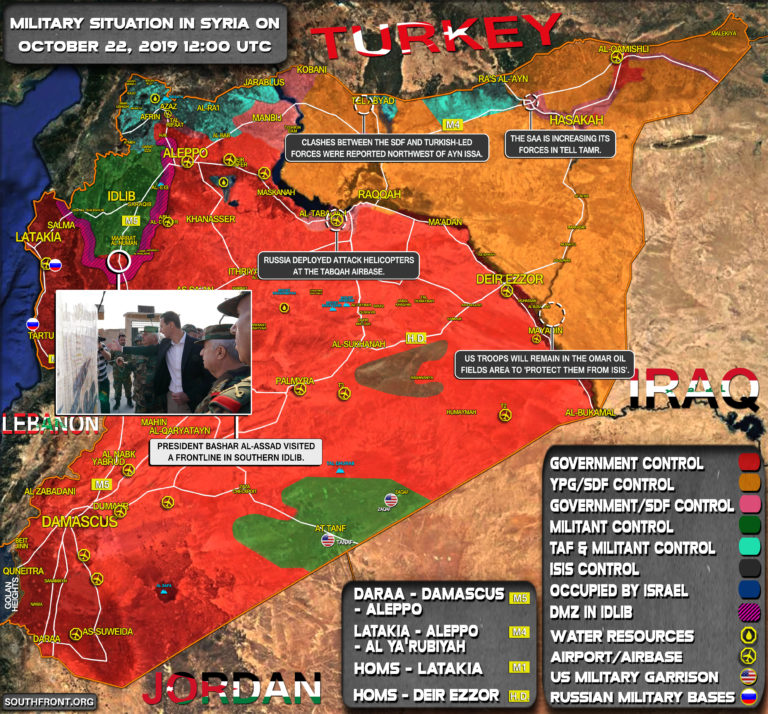 Why do I think this is such a good deal for Syria and the Rojava Kurds? The key is in the first two points of the agreement. The current northern border is preserved. That is a huge win for Damascus. Turkey will be sending a substantial number of Syrian refugees back south of the border to areas not now populated by Kurds. This is a major plus for Erdogan. He can claim this as a victory and save face. Both sides agree to fight terrorists. Turkey won’t fight the jihadis, but the Russians in the joint patrols sure will. And the SAA won’t let them sleep either. The jihadis will not be able to prey on the Kurds living near the border.

The YPG/SDF will be away from the border which also can be claimed as a Turkish victory. However, remember that the SAA-SDF agreement of last week calls for incorporating the YPG/SDF into the SAA 5th Assault Corps. Armed Kurds will still be among the Kurds looking out for Kurdish interests under the auspices of the SAA. That’s where the Kurds win. The SAA and Russian patrols will be be no kinder to jihadis in Rojava than they are to the Idlib jihadis.

Speaking of Idlib, it appears the offensive to reduce that jihadi salient is about to kick off. SAA units are massed in northern Latakia where Syrian and Russian air assets have been pounding the living crap out of the jihadis. President Assad visited his front line troops today. I would say things are about to get real in northern Latakia and Idlib.

Link to the original article: https://turcopolier.typepad.com/sic_semper_tyrannis/2019/10/the-new-reality-in-rojava-ttg.html