In 2019, every major asset class finished in the black.

And although the broad commodity market finished up 17.6% on the year, the performances of individual commodities were all over the map. For those familiar with the sector, that’s pretty much par for the course.

That said, the lack of an obvious correlation in commodity markets also makes for a thought-provoking and humbling exercise: comparing the annual returns of commodities against the data from the past decade. 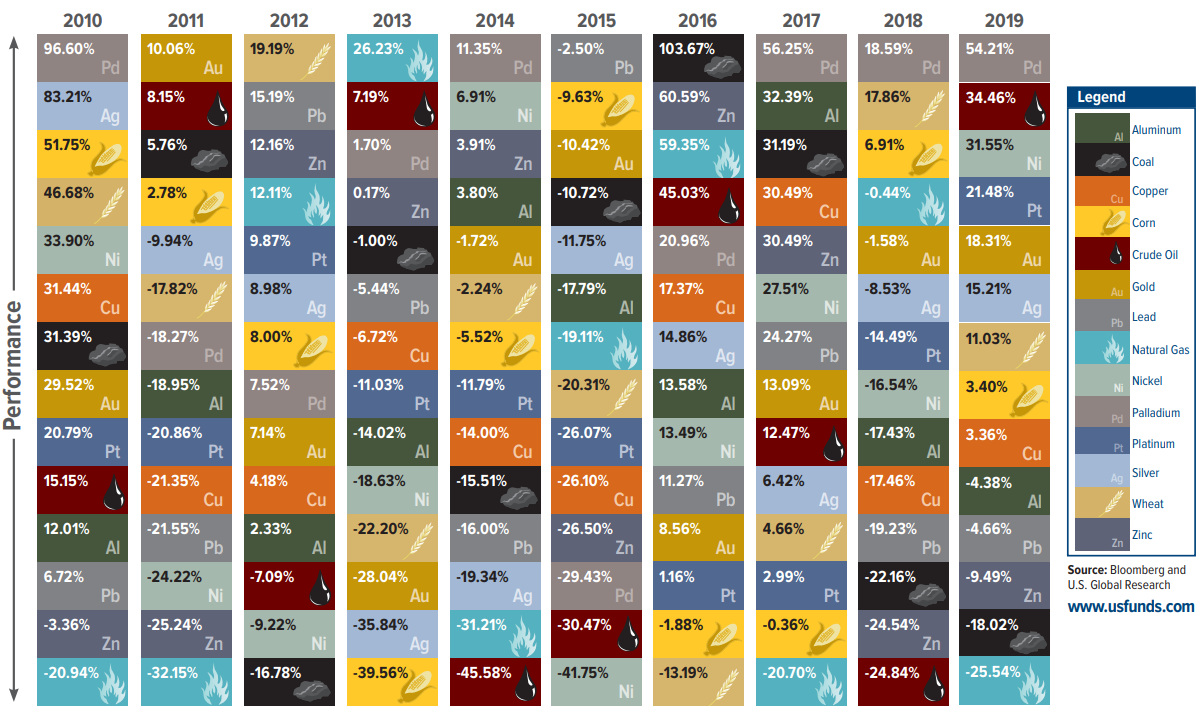 Today’s visualization comes to us from U.S. Global Investors, and it compares individual commodity returns between 2010 and 2019.

You can use the interactive tool on their website to toggle between various settings for the table of commodity returns, such as breaking them down by category (i.e. energy, precious metals, etc.), by best and worst performers, or by volatility over the time period.

Let’s dive into the data to see what trends we can uncover.

In 2019, palladium finished as the best performing commodity for the third straight year — this time, with a 54.2% return.

You could have bought the precious metal for about $400/oz in early 2010, when it was a fraction of the price of either gold or platinum.

Nowadays, thanks to the metal’s ability to reduce harmful car emissions and an uncertain supply situation, palladium trades for above $2,000/oz — making it more expensive per ounce than both gold and platinum.

Oil and Gas: Opposite Ends of the Spectrum

As key energy commodities, oil and natural gas have an inherent connection to one another.

However, in 2019, the two commodities had completely diverging performances:

Crude oil prices gained 34.5% on the year, making it one of the best commodities for investors — meanwhile, natural gas went the opposite direction, dropping 25.5% on the year. This actually cements gas as the worst performing major commodity of the decade.

Finally, it’s worth mentioning that gold and silver had a bounceback year.

Gold gained 18.3% to finish with the best return the yellow metal has seen in a decade. Silver followed suit with a similar story, rallying 15.2% over the calendar year.

Precious metals now sit at multi-year highs against an interesting economic and geopolitical backdrop to start 2020.

Where do you see the above commodities ending up on next year’s edition of the rankings?

Egon von Greyerz: The Gold Price Is Not the Price of Gold

All of the World’s Money and Markets in One Visualization

All the World’s Metals and Minerals in One Visualisation