There’s a 60% chance you’re reading this article on a smartphone right now—a testament to how ubiquitous these devices have truly become in our lives.

We rely on smartphones every waking minute to stay connected. However, the various products and services—also known as the smartphone multiplier market—that allow us to use these devices in the first place can often be an afterthought.

Today’s chart uses data from Deloitte Insights to show just how sizable this ecosystem is becoming, and why it’s heating up as a battleground for big technology companies such as Apple, Alphabet, and Amazon. 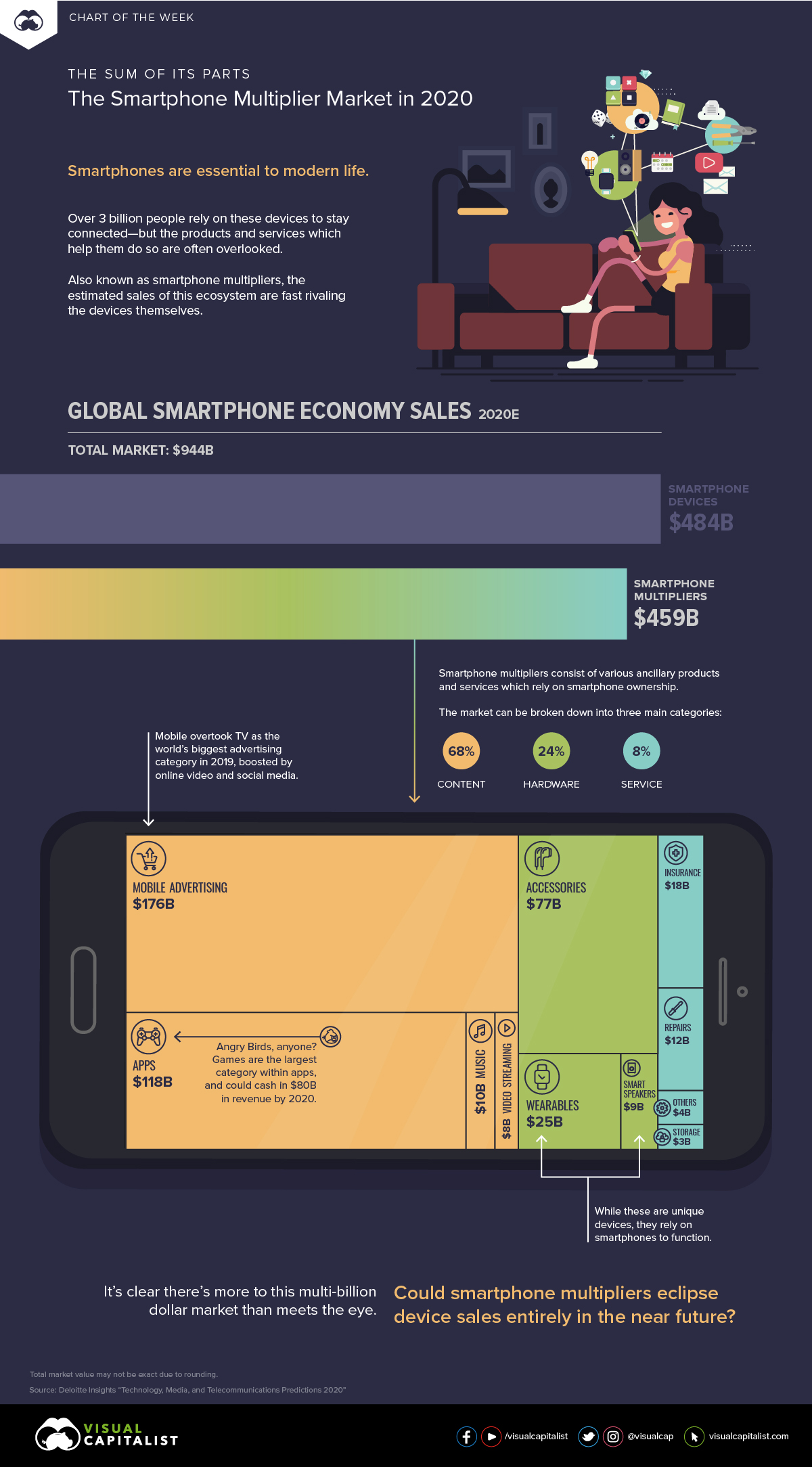 There are over 3.3 billion smartphone users in the world today.

The smartphone economy—estimated to pull in $944 billion in total revenue in 2020—is so massive that it rivals the GDP of countries like Indonesia and the Netherlands.

At the moment, the smartphones themselves contribute over half the market value. Despite the continued hype surrounding the release of new models, global unit shipments of smartphone devices appears to have reached a saturation point:

There are two theories as to why shipments are leveling off. First, product innovation is more iterative today than in the past, which means there are fewer groundbreaking features to entice consumers into purchasing new devices. A second factor is that people are simply holding onto their devices for longer than in the past.

As device sales plateau, tech giants are diversifying efforts to find new ways to lure customers back in—and another related market is growing more lucrative as a result.

What is a “Smartphone Multiplier”?

When people think of the smartphone market, hardware likely springs to mind first, but an equally important part of the equation is the plethora of apps, services, accessories, and complementary devices that help us connect with the digital world.

The ecosystem of these products and services are known as smartphone multipliers. According to Deloitte, this ecosystem will drive $459 billion of revenues in 2020, an impressive 15% increase from the prior year.

The market can be broken down into three main categories:

Largely driven by mobile advertising and app sales, content is by far the largest subcategory, accounting for 68% of revenues:

If you’ve ever owned a pair of headphones or a powerbank, it’s easy to understand why accessories are the third-largest subcategory in the smartphone multiplier market. With more people ditching the cable for wireless headphones, this subcategory is also set to grow even more.

The Next $1 Trillion Economy?

In the U.S., 73% of adults go online several times a day or almost constantly, which makes it clear that they aren’t going to give up their smartphones anytime soon.

As a result, smartphone multipliers will continue to evolve and flourish, presenting a unique opportunity for investors and businesses.

Altogether, it’s expected that the smartphone multiplier market will grow between 5 and 10% annually through 2023, likely propelling the entire smartphone economy past the $1 trillion benchmark in the coming years.

Picture by Gian Cescon on Unsplash.

What Explains the Success of the Companies Dominating the Internet?

Electromagnetic Radiation Due to Cellular, Wi-Fi and Bluetooth Technologies: How Safe Are We?

Leo Hohmann: Know Your Rights or Get Swept Up into Government’s ‘Massive’ Contact-Tracing ‘Show Your Papers’ Scheme