Last week, the Herald Publication revealed that the City of Fairview Heights in Illinois entered into an agreement with the IDOT to install automatic license plate readers (ALPR) on highway trusses to allegedly “prevent, deter and solve crimes.”

Which is typical government doublespeak to explain away Big Brother tracking innocent motorists.

Taken at face value, Fairview Heights reasons for tracking everyone is nothing new, they use the same cookie-cutter excuses that law enforcement across the country have been using.

But what really caught my eye was the “other resolution approved by the council.”

The other resolution calls for the city to belong to the DEA’s National License Plate Reader Network (NLPRN).

“The other resolution approved by the council calls for the city to belong to the National License Plate Reader Network which is administered by the DEA. The agreement with the DEA allows Fairview Heights Police to both input data into the national system and retrieve data from it along with establishing the processes for the sharing and use of such information.”

How does capturing the personal information of everyone driving through or into Fairview Heights prevent or deter crimes?

Fairview Heights Police officers “can input data into the national system and retrieve data from it along with establishing the processes for the sharing and use of such information.”

That same agreement further specifies that the information obtained through the NLPRN can only be used “for the investigation of drug trafficking offenses, money laundering, other crimes, amber alerts, silver alerts and in the furtherance of the mission of a traffic stop.”

But those are not the only things law enforcement uses them for.

The Fairview Heights Police Department and other agencies are helping the DEA expand their 343 million license plate database.

As far as further plans go, Chief of Police Chris Locke said, “things are advanced to the point that the IDOT trunking system can be used to make connections under the state highway when the time comes to add more to the system.” 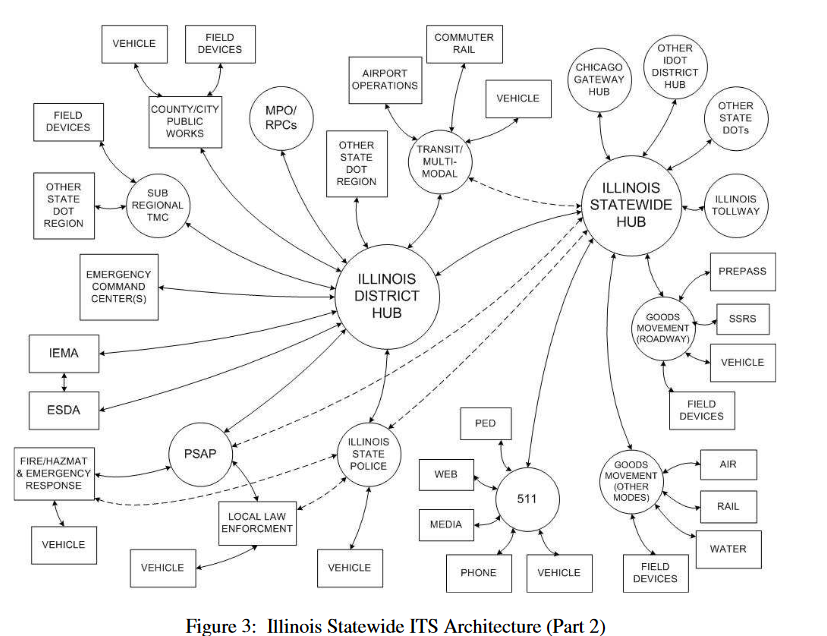 As you can see from the illustration above, the IDOT trunking system, shares personal license plate information with numerous government agencies. (To find out more about Illinois trunking system click here.)

“Alderman Frank Menn suggested the possibility of placing such license plate readers around any cannabis dispensaries that may be opening in Fairview Heights and Locke answered that the devices can be placed anywhere the city wants to have them set up.”

Menn’s statement should serve as a red flag to anyone who still clings to law enforcement’s misleading statements about license plate readers.

The Herald Publication did a fantastic job in explaining what police ALPR’s are really being used for:

“As part of a DEA program that was initiated in 2015 and has been growing in the United States ever since, the license plate readers are high-speed, computer-controlled camera systems that are typically mounted on street poles, streetlights, highway overpasses, mobile trailers or attached to police squad cars. They automatically capture all license plate numbers that come into view, along with the location, date and time. The data, which includes photographs of the vehicle and sometimes its driver and passengers, is then uploaded to a central server.”

Do you really want law enforcement to know who is in your passenger seat? Do you want Big Brother to know when you go to the bank, pharmacy, grocery store, liquor store, place of worship, or cannabis dispensary?

Law enforcement’s lies about ALPR’s are apparent to anyone willing to look beyond the headlines and see what everyone has been saying for years: ALPR’s can and will be used to track everyone’s movements.

Picture by Sam Churchill via Flickr (CC BY 2.0). Diagram via Illinois DOT.

This work by Massprivatei is licensed under a Creative Commons Attribution-NoDerivatives 4.0 International License and may be reposted as is, with attribution to the author Massprivatei.blospot.com.