Since 1977, the International Energy Agency (IEA) has put together the World Energy Outlook, a highly anticipated annual report that looks towards the future of energy production and consumption on a global basis.

In the latest edition, the report dives into two very different policy scenarios that help illustrate the choices and consequences we have ahead of us.

In this post, we’ll look at each policy scenario and then dive into the associated numbers for each, showing how they affect the projected global energy mix from 2018 to 2040. 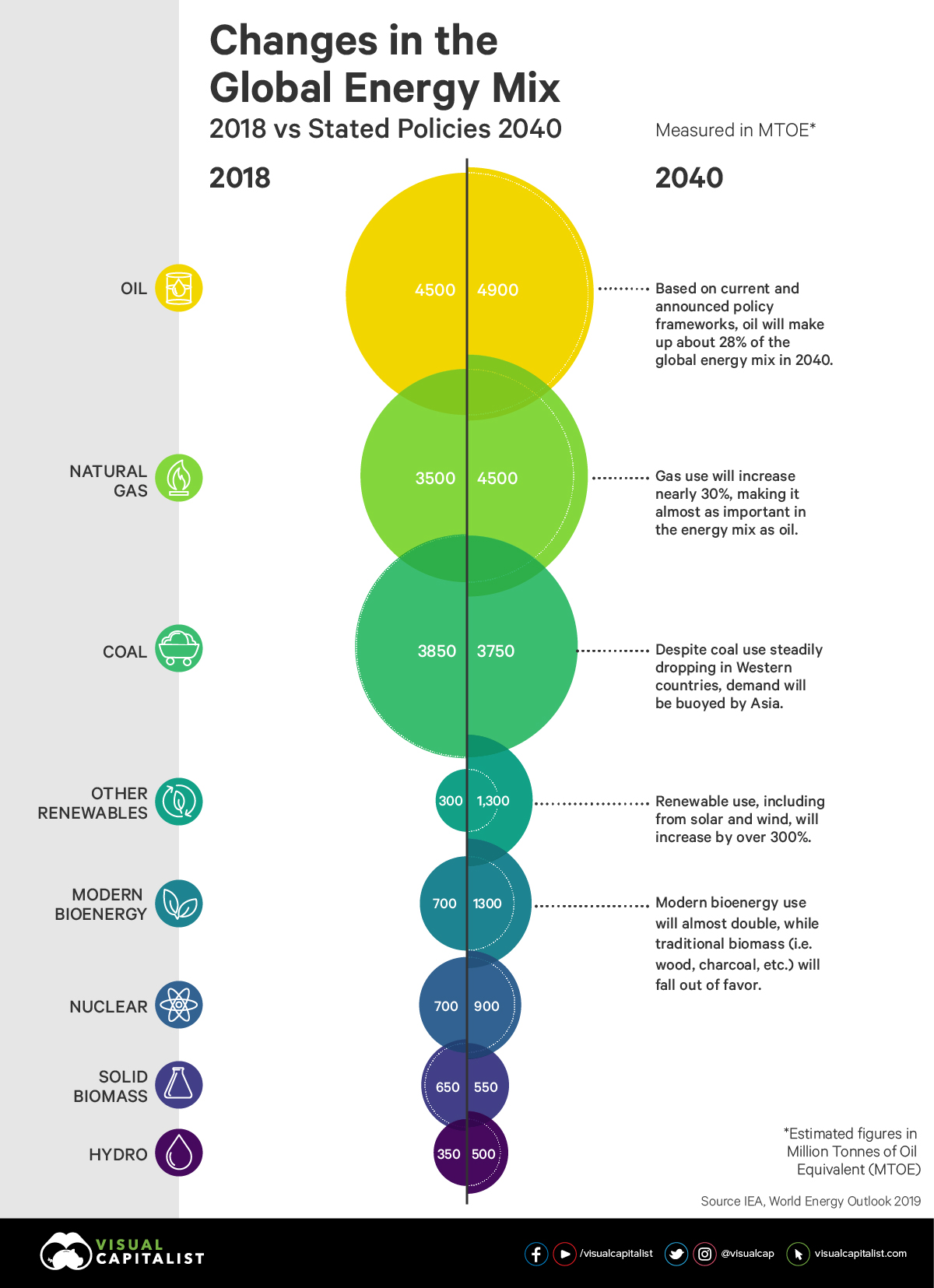 The IEA bases its projections based on two policy scenarios:

Neither scenario is technically a forecast; the IEA sees both scenarios as being possible.

However, this data can still provide a useful starting point for decision makers and investors looking to read the tea leaves. Will countries stick to their guns on their current plans, or will those plans be scrapped in the name of bolder, sustainable initiatives?

Today’s chart shows data corresponding to this policies scenario, as adjusted by CAPP.

See the energy use data below, shown in terms of Millions of Tonnes of Oil Equivalent (Mtoe):

Note: Data is based on CAPP conversion estimates, and is rounded to nearest 50 Mtoe.

In the Stated Policies Scenario, oil will be the largest energy source in 2040, making up about 28% of the global energy mix — and natural gas will be right behind it, for 25% of supply.

Coal consumption, which is decreasing in Western markets, will stay consistent with 2018 levels thanks to growing demand in Asia.

Meanwhile, renewable energy (excl. hydro) will see an impressive renaissance, with this category (which includes wind, solar, geothermal, etc.) increasing its portion in the mix by over 300% over 22 years.

The IEA’s Sustainable Development scenario is very different from the status quo, as shown here: The contrast between the energy needed in the Stated Policies (STEPS) and Sustainable Development (SDS) projections is stark, going from a 2,500 Mtoe increase to a 800 Mtoe decrease in total consumption, driven by residential and transportation sectors.

Under this scenario, renewable energy use for electricity consumption (incl. hydro) would need to increase by 8,000 TWh more, with ultimately more than half of it in Asia.

Under this transformational and ambitious scenario, fossil fuel use would plummet. Coal consumption would drop by roughly 60%, oil consumption by 30%, and the role of natural gas in the energy mix would remain stagnant.

Both scenarios are a possibility, but in reality we will likely find ourselves somewhere in between the two extremes.

This makes these two baselines a helpful place to start for both investors and decision makers. Depending on how you think governments, corporations, and organizations will act, you can then adjust the projections accordingly.

Picture by David Mark via Pixabay.

The Best and Worst Performing Sectors in 2019

Is Oil the Canary in the Coal Mine for a $640 Trillion Derivatives Disaster?