I’m done mincing words. I’m done giving people the benefit of the doubt. Whenever I do that The Davos Crowd and their highly placed agents make me look like a virtue-signaling fool.

But that’s come to an end. It’s clear that the plan from the beginning was to allow this virus to run wild in high profile places like New York and Italy to create fear. It is also clear that people like Dr. Anthony Fauci were activated to ensure the worst possible response to the crisis would be implemented in the U.S.

And now, after more than a month after shutting down whole swaths of our economy and locking people in their homes under effective house arrest it’s also clear that most of this response was overblown and unnecessary.

And here in the U.S. the point man on this insanity has been Dr. Anthony Fauci, director of the National Institute of Allergy and Infectious Diseases (NIAID) whose ties to all the worst people you can imagine run very, very deep.

Lastly, it’s also very clear that President Trump was the target the entire time. He finally hit his breaking point yesterday because he realizes that he was advised poorly. 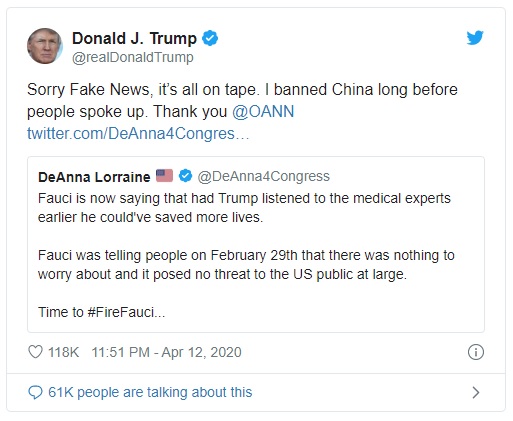 First that tweet, then there was the presser where he roasted the media. 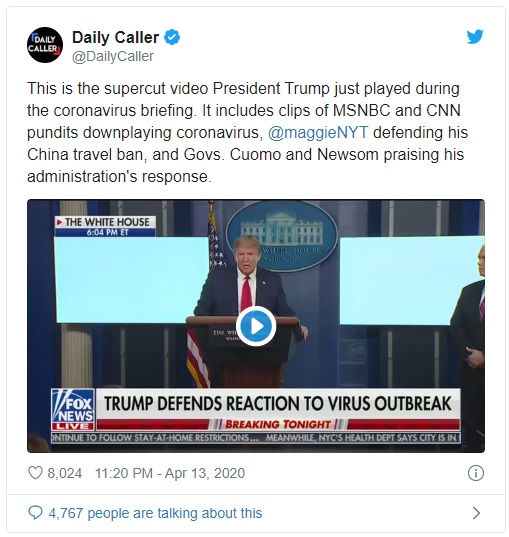 Now this morning, the Surgeon General Jerome Adams has effectively announced the U.S. has dumped the models created by the CDC and the WHO — models backed by Bill Gates and forced on the scene by his gatekeeper Fauci. From Breitbart and Fort Russ on Adams’ radio interview:

Data vs. Models: The Coronavirus Task Force is now working with real-time data about the country, Adams said, instead of the predictive models that were criticized for being overblown and exaggerated. — Breitbart

He explained on the Sirius XM’s Breitbart News Daily host Alex Marlow, that given the new data, businesses will begin to re-open as early as May, others in June.

This runs contrary to the out-and-out fear-mongering of Dr. Fauci and Bill Gates who have made a media tour, threatening the public that businesses may not re-open for six months to a year, or until and unless governments purchase their conveniently patented, big-pharma vaccination.

According to Dr. Adams:

“What the American people need to know now is we actually have data, and so we’re tracking that data,”

Before this about-face, which appears to have come as an order from the Trump administration in consultation with the findings of Dr. Adams, the task force was working with’predictive models’, which had been created by the Bill Gates dominated WHO and CDC. Dr. Fausti’s control over the CDC has been criticized in the past for its for-profit motive in handling a range of illnesses from HIV to H1NI.

The lock down orders hopefully will be lifted soon, likely May 1st, but yesterday is a better date. The models have been dumped and the actual data are now in use. And the data are clear. There is no pandemic.

The WHO/CDC/Gates models have been horrifically inaccurate, catastrophically so.

If I didn’t know better I’d think these guys were economists for the Fed or the IMF. I thought this was supposed to be about science (SCIENCE!)?

If so I have a couple of questions for the so-called experts:

So why wasn’t the CDC advocating widespread testing while monitoring the data from Wuhan?

Why were the media roasting President Trump over his travel ban from China?

Why were people like Fauci, as late as early March, saying this wasn’t a big deal when he knew otherwise?

Why is no one roasting New York City Mayor Bill DeBlasio’s chesnuts over an open fire for not shutting down the biggest transmission vector in the entire country, its mass transit system?

Why was everyone locked down and not just the high risk people?

It turns out, like everything else today, the answer to all these questions is simple… politics. And the worst kind of politics.

Meanwhile, Fauci keeps trying to upstage Trump, thinking he could continue to command the heights because he’s the chosen expert.

While I’m not Trump’s biggest fan, I have to say eventually he puts his foot down and when he does it then goes up the ass of some bureaucrat who richly deserves it.

And Fauci deserves far more than just the boot, as it were. He deserves all of our scorn and derision.

For all of you thinking I’m off base here, that somehow Fauci’s experience and credentials count for more than my vitriol I’m going to ask my last question.

Why should we listen to the word of any doctor that recommends people huddle in their homes afraid of a cousin to the common cold versus building up our immune systems and our herd immunity?

Fauci shouldn’t be leading a Presidential Task Force he should have his medical licence revoked for violating his Hippocratic Oath.

So, is he going to reimburse personally the billions lost by small businesses around the country? The destroyed supply chains, the spilled milk, the spoiled food, the people who weren’t treated for non-COVID illnesses as our hospitals were overrun with his political experiment in mass hysteria?

He’s no more a credible source for medical advice regardless of his resume than I am.

Nearly everyone knows that strengthening the immune system is how you fight a cold. Vitamin D, C, bone broth, rest and sunshine.

You don’t need a medical degree from Holy Cross to know this. But somehow Fauci never seems to approve or green light treatments that do that. It doesn’t matter if we’re talking cancer, AIDS, or COVID-19, the man is a walking death sentence. He’s the very essence of regulatory capture and prima facia evidence that power and corruption go together like peanut butter and jelly.

If you squint hard enough he really does look like Gollum.

If there is one thing that this pandemic has exposed, along with the concomitant economic dislocation it is that ‘experts’ better run for cover.

Fauci, Gates and George Soros (who’s right on time with a new op-ed in the L.A. Times telling everyone we need UBI from the Magic Money Tree) are trying to create a medically-based transnational superstructure in the same way that The Davos Crowd failed to do it through trade deals like TTIP and TPP, which Trump nixed.

And it’s time that we looked at this situation with clear eyes and not the rose-colored glasses of what we want our government officials to be. Because if we don’t we’ll lose what’s left of our dignity. Forget the republic, folks. That’s gone.

This lock down is about whether or not we’re willing to actually walk the walk versus just whine about them ‘taking our freedoms.’ They are in the last stages of doing that right now, there’s no future tense anymore.

This is the present. This is real.

Men like Fauci shouldn’t just be fired, they should be tried and convicted for gross incompetence for the harm they are doing and the harm they’ve done.

Knowingly promoting mathematical models of disease transmission that were never intended to be accurate is FRAUD, not an honest error. He’s not the only doctor in the world with an opinion on COVID-19. Many of them are incensed with how this has been handled.

When issuing commands and recommendations that could cost the world its soul it is incumbent on the person making those recommendations to get them right, not run cover for evil oligarchs intent on shepherding humanity to their own private Mordor.

Because if they don’t then they are liable for results. But government operates in a true vacuum, immune to the effects of its bad decisions through sovereign immunity.

This is the fundamental problem with creating government agencies that have these powers. They are staffed by people who can be corrupted, and like Fauci are easy to corrupt to command controls over our lives that they have 1) not earned and 2) should never have.

And it’s why it’s time for us to stand up and no longer accept these men and women as any more wise and insouciant than we are. It’s truly time for the kind of intellectual revolt against the Progressive ideal of the wise engineer.

The palpable disappointment on the part of Gates, Fauci, the media and the Democrats at the effectiveness of hydroxychloroquine is all the indictment of these people you need to finally let the scales fall and see them for what they are.

These are megalomaniacs without conscience. They are Bond villians without the charisma. And we need to strip them of their legitimacy first in our minds and then in practice.

Because if it were up to them there would never be a cure for COVID-19, just an endless series of treatments that make us sicker and more dependent on them.

#FireFauci isn’t just a meme, it’s a metaphor for taking control over our lives and our society. It’s time to go outside, leave our homes and get back to work.

They know that if they keep your business closed for more than three months it’ll be gone forever. Bill Gates is obsessed with killing off billions of people and having the rest of us on residual poison waiting for the next vaccination for COVID-20 or COVID-21.

And while for Gates it’s not about making more money, it’s about the control, he motivates those around him with the promise of some of that sweet, sweet money they couldn’t ever earn for themselves honestly.

After destroying these small businesses and printing trillions will allow vultures allied with them to come in and pick the bones of our gutted society clean.

This is what they are setting up while Soros, cyborg that he is, apes the empathy we humans actually feel to demand the government print more trillions to support the common man hurting because of him.

If I didn’t have a soul, I’d actually appreciate the irony of it.

Frankly, it’s beyond sick and it has to end. If we don’t see this lock down and attempted coup to allow doctors to run the country for what it is, then we deserve everything that’s coming to us.

Will You Resume Normal Daily Activities Once the Coronavirus Restrictions Are Finally Lifted?

Who Now Is Providing for the General Welfare? Op-Ed

Due to the Weather, Midwest Farmers Fear Widespread Crop Failures and a “Record-Low” Harvest in 2019

Shining the Light on Child Services