Consider this an open message to The Davos Crowd. I can see you using the pandemic of COVID-19 to run the table on holding onto power while your institutions fail.

It is obvious that by either design or acting opportunistically this pandemic has become your casus belli on us, to usher in a new world based on total surveillance, total compliance and control.

You’ve used fear over a bug to induce mass hysteria at a level that is difficult to contain. After more than two generations of marginalizing the masculine and amplifying the feminine the Progressive deification of trained experts which you turned into ‘believe all women’ to push identity politics has reached its zenith.

This has now reverted back into ‘believe all smart people’ in the minds of your useful idiots who retweet exponential growth curves they don’t understand and take as gospel truth your antipathy to curing this virus.

Thanks to this mass induced insanity we have a society that is uncomfortable with the risk of living thanks to a Nanny State that is more Oedipal Mother than the usual Abusive Father.

But this is more than just risk aversion. It’s truly a pathological fear of risk and the consequences of poor decisions; high time-preference decisions that permeate every aspect of our Western society.

But that myth of the magic money tree can’t bargain with a random piece of foreign DNA. The threat to our biology can’t be fought with more fake money.

But we still cling to your mass delusion that we live in a post-scarcity age that’s endemic across the generations. Even the angry and bitter Gen-Xers aren’t quite ready for what the world looks like without access to nearly unlimited credit.

And it has created the false sense of security that we as a species have mastered risk.

But we haven’t. You’ve mastered the art of laying off that risk for another day, another week, another year and called it prosperity.

And because we all want to believe we’re smarter than average bear and don’t want to face tomorrow without our favorite things we go along with the comfortable lie.

In other words, we believe risk is someone else’s problem. And that we owe the debts to ourselves. And it’s okay to foist risk off on those hapless suckers lest we be inconvenienced by the barest minimum of privation.

Let’s call that, in the words of a friend of mine, Spiritual Boomerism.

It’s so insane that our financial system is built on pricing debt instruments based on the dubious concept of R* equaling zero. What is R*? It’s the ‘default risk premium’ used to ‘price’ financial assets.

Only supremely arrogant people who believe they have conquered time, can believe there are such things as risk-free anything.

But it’s clear that into this riskless world you’ve steered us into thinking exists we’re being over-stimulated to believe in the potential risk from COVID-19 to push for changes to our society that benefit you far more then us.

But I thought we mastered risk. You told us so.

And that’s the dirty little secret isn’t it? The truth is that you’re the ones that can’t handle risk. You’ve never actually risked anything, preferring instead to create an endless series of one-way trades where no matter who loses, you win.

You love your power and pelf. You believe you are the wise, all-seeing parents, guiding their wayward children to a better world, your Utopia.

The riskless systems you’ve deluded us into building for your benefit over-invested in the wrong kinds of insurance; social safety nets that are now overwhelmed to the breaking point and are soon to be revealed as just another failed bribe.

While the kinds we need, medical infrastructure, don’t have a dime’s worth of spare capacity when risk actually rears its ugly head, because you extracted that out in all your laying off the risk.

From the beginning, the threat from COVID-19 wasn’t about the virus itself but about its added strain to already over-strained medical systems. These are the mismanaged and malinvested systems of either full-on state control like in your paragon of Europe or Byzantine regulatory strata designed to eliminate competition and drive up pricing known here as Obamacare.

And now you’re going to use your own failures to scare us into accepting the worst kinds of intrusions into our lives. You’re going to lock out dissidents who refuse to get a medical passport and Bill Gates’ ID2020 chip.

It’s like all of a sudden Gates has emerged as the high priest of Spiritual Boomerism. We need this as the first stage of preparation for the next virus coming our way.

Because, you know, risk.

We’ve gone from a fairly normal world to an episode of Black Mirror in a month. And in your unbelievable hubris you think we’re all going to just go along with it because of a fucking cold and a four-year old TED Talk?

Do you really think we’ve become such ball-less eunuchs to think that this worship of blue-check marked, official smart people is the key to humanity’s future in dealing with the risks of being alive?

Because we can see you crapping your pants on TV, by the way. That is, when we decide to tune in for a few minutes to see if you’re still there.

Faith in government is failing at every level. The continued false thesis that China’s death toll is only around 4000 people because they locked everyone down is meant to be the antithesis to the U.S.’s less top-down approach where now the death toll in New York alone is more than three times those that died on 9/11.

And the synthesis in your inaccurate Straussian model of our behavior is us accepting free movement as long as we can show our proper papers?

Um, how about no?

We can see you prepping the ground for this. This is the deplatforming of Alex Jones taken to its logical conclusion. If we aren’t willing to submit to complete monitoring and tracking of all of our movements then we cannot be a member of your society.

I can see why Donald Trump is fighting this they way he is. He’s started a new Cold War with China because he realizes it’s a major front in his, to date, mostly defensive war against you.

I think he understands that the real fight is between your quislings in the DNC and across the European Union trying to export China’s dystopian world and retaining some semblance of the nation-state. And this full court press for global government in the name of stopping a disease is ludicrous.

Because when you step back from those growth curves and put down the crack pipe full of noradrenaline if we hadn’t named it, if you hadn’t instructed the media to create mass hysteria most people in the world would just see it as another really bad flu season.

Because that’s the reality of the numbers at this point.

And had your financial markets not crapped the bed, you would be lying to us still about the severity of this virus.

So issue your diktats all you want. Push for your post-COVID Utopia of driverless cars, bug burgers, biometric conduct codes and rights-denying vaccination profiles.

Go for it. Honestly, we aren’t listening anymore. You lost your cache with us because your first instinct in any crisis is to lie to us. And now we don’t believe you about frankly anything.

Because after decades of lying to us about everything we’re asking the simple question, “Why would you be telling us the truth now?”

When someone as mild-mannered as Scott Adams is now talking functional anarchy to his millions of followers, you have a real problem. 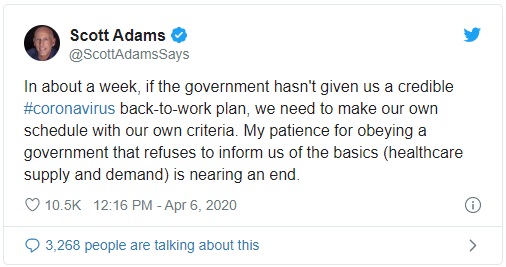 So, you’d better start wondering just how many button pushers you actually have to shock us back into the bread line.

But you already know in your hearts there aren’t enough.

And make no mistake, no matter how powerful you think your databases are we will never thank you for handing us back the bread you stole from us. They are not your magic God Pills. They are simply second rate Viagra bought from a liquor store in a now-destitute Mexican resort town.

I really don’t think you understand just how much anger there is out there or you wouldn’t be playing this card now. And I’m not talking in Flyover Country but in your backyards.

So, if you are as smart as you think you’ll realize it’s over. We’re taking the piss out of Spiritual Boomerism and assuming some risk.

Armed with a concierge health care provider, some hydroxychloroquine, a $5 Z-pack, and some red meat, we’ll brave the Coronapocalypse and get back to rebuilding our communities you so desperately want to destroy.

And I know what scares you the most, that we’ll actually prefer that to being coddled back into the amniotic sack of the magic money tree and all the fake protection it buys.

We’ve already won and this world no longer belongs to you. Because failure here is the end of you.

This is what real resistance looks like. And no amount of sending out the bot army to scream “Flatten the Curve” will stop that.

This is what you won’t stop. We’re not going to pick up guns and give you a reason to kill us. We’re not even going to raise our voices. We’re simply going to stop bothering to listen to a thing you say.

Rasputin in the White House: Trump Must Boot Dr. Fauci from His Inner Circle or Lose Everything He’s Fought For