If Donald Trump wants to get re-elected as President of the U.S. he’s going to have to take out former President Barack Obama. At this point Obama is the person who most stands in his path for a second term.

Former Vice President Joe Biden may well wind up being the nominee but that’s only because he is Obama’s stand in since Obama can’t run for a third term thanks to the only part of the U.S. Constitution anyone seems to give a damn about anymore.

But, make no mistake, the current flap about the unmasking of Trump’s first (and short-lived) National Security Adviser Gen. Michael Flynn is all about Trump finally going on the offensive after more than three years of fighting rear-guard actions just to stay in power.

Obama was the ring leader in the operation to spy on Trump and anyone with half a brain knows it. The unmasking of the unmaskers in the Obama administration is to tarnish his legacy and dishearten any centrist voters who may be tiring of Trump’s mistakes and the worsening economic collapse engineered by the shutdown of the economy during the peak of the COVID-19 hysteria.

This is why it is imperative for Trump to take Obama out of this election cycle as quickly as possible.

With Hillary finally bending the knee to Obama when she publicly endorsed Biden that was the signal that she’s acknowledging she’s lost the fight for control over the Democratic Party, which she and her husband have ruled with a closed fist for decades.

Now Obama is free and clear to begin campaigning openly on Biden’s behalf. And don’t for a second think that the trial balloons of his wife Michelle being Biden’s running mate are the fanciful wishes of hopeless Democrats. Michelle is absolutely one of the top candidates for that job.

Because with Trump surviving everything thrown at him to this point the only chance Biden has this fall is his second coming as the Left’s political messiah. Take nothing away from Obama, he is an excellent campaigner.

With Michelle as his running mate that puts Obama right where he needs to be, hounding Trump on all the issues that are supposed to be weaknesses for him – the economy, COVID-19 deaths, unemployment, etc.

So, the timing of Trump having his acting ODNI Director Richard Grenell pick a public spat with the hapless Head of the House Intelligence Committee Adam Schiff and get the transcripts of the impeachment interviews released to the public isn’t coincidence, folks. These transcripts confirm that Obama’s inner circle all lied through their teeth in the media for years about the RussiaGate collusion story.

This comes on the heels of Trump’s somewhat cleaned up Dept. of Justice dropping the case against Flynn which then opens up the opportunity to resurrect the timeline of events which led up to his firing and indictment by the very people now revealed as bald-faced liars and conspirators.

Trump then goes directly to the people and coins the term of the year, “Obamagate.”

He’s telling the entire world who his target is. He knows that if he loses this election any chance of reforming any part of the D.C. swamp vanishes as Biden steps aside for health reasons after sweeping everything under the rug and Obama rules the White House from the shadows as First Lady.

And it’s clear that this is the real reason behind the Democratic governors defying their people and Trump on opening up their cities and states. They are purposefully trying to destroy the country to regain control over it.

These people are vandals.

But Trump’s biggest obstacle at this point isn’t the Democrat-controlled House or the Media, it is the Republicans in the Senate who have proven repeatedly to be spineless when it comes to anything substantive.

You can see the maneuvering and horse trading already. Lindsey Graham (R-SC) is already trying to downplay the magnitude of this scandal, which makes Watergate look like the raid on the dean’s office in Animal House.

Obama is guilty of the highest crimes a President can be guilty of, utilizing Federal law enforcement and intelligence services to spy on a political opponent during an election. This is after eight years of ruinous wars, coups both successful and not, drone-striking U.S. citizens and generally carrying on like the vandal he is.

Thankfully Rand Paul (R-Ky) has been activated by Trump to go after Graham directly and force him to back peddle. Paul is already calling for hearings in the Senate, using his Chairmanship of the Government Oversight Committee to end run around Light in the Loafers Lindsey.

The FBI is now going after people like Richard Burr (R-NC), head of the Senate Intelligence Committee for potential insider trading violations. This is a pure power play to make sure Burr doesn’t let this die in committee.

If this tweet isn’t clear enough that Trump wants Obama’s head on a platter and he’s now willing to go scorched earth on him and anyone trying to protect Obama to get it I don’t know what is. 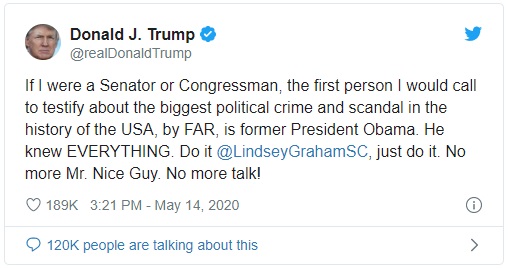 Things are spiraling out of control in D.C. quickly. A reader noted to me recently that one of Trump’s strengths is that he thrives in chaos, that he’s most comfortable stirring the pot and getting everyone around him ‘on tilt’ as the poker players say.

That’s what he’s doing now with #Obamagate. He’s doing what he does best, forcing his opponents to ab react to him and leaving them vulnerable to his next attack. He’s in pure campaign mode now, which we haven’t seen in four years.

But this time he’s campaigning with a lot more resources at his disposal especially if he has them all nailed. Trump wouldn’t be going after Obama if he didn’t have proof of Obama’s guilt. He’s a limbic creature but he’s not random.

Obama’s people will spin this as desperation over the mishandling of COVID-19, but it won’t matter. With a Justice Dept. that looks ready to get to work for the first time in decades, Trump just well be ready to finally do something right.

Tom Luongo: Trump – Master of the Seen – Vandalizes US Economy

Michael Lebowitz and Jack Scott: The Path to Socialism Is Paved in Bailouts