The Federal Reserve Board Treasury International Capital Survey reported that over $6.4 trillion was owed to foreign governments and international investors, an increase of over $208 billion since the previous survey in December 2018, indicating that foreign demand for US Treasuries continues to remain strong. 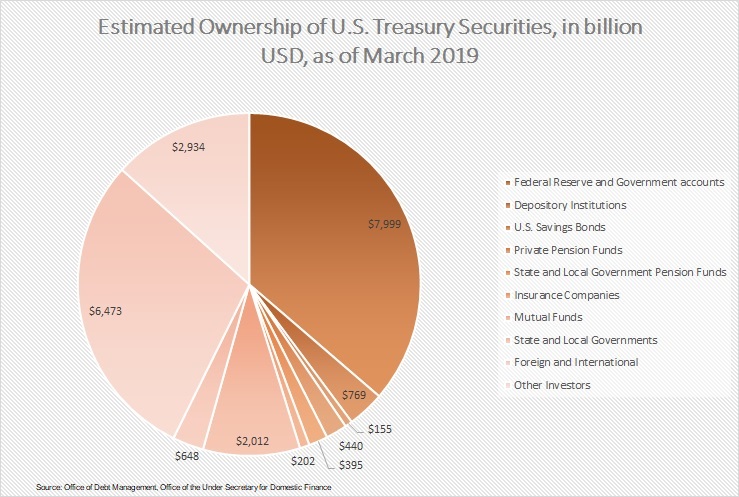 The bipartisan Congressional Budget Office (CBO) reports that the federal budget deficit was $984 billion in the 2019 fiscal year. Even adjusting for a shift in the timing of certain payments which happened between 2017 and 2018, the federal budget deficit increased by $162 billion.2 According to a CBO report issued in August 2019, “federal debt held by the public is projected to grow steadily, from 79 percent of GDP in 2019 to 95 percent in 2029—its highest level since just after World War II”.3

Looking at alternative scenarios for the debt-to-GDP ratio through 2049, the 2019 Long-Term Budget Outlook reported offered the following gloomy outlook:

If lawmakers changed current laws to maintain certain major policies now in place—most significantly, if they prevented a cut in discretionary spending in 2020 and an increase in individual income taxes in 2026—then debt held by the public would increase even more, reaching 219 percent of GDP by 2049. By contrast, if Social Security benefits were limited to the amounts payable from revenues received by the Social Security trust funds, debt in 2049 would reach 106 percent of GDP, still well above its current level. 4 [emphasis added]

Even its Extended Baseline Projection model showed federal debt held by the public to GDP rising to 144% by 2049.

Despite the continued deterioration of the financial position of the federal government, as of 1 November 2019, the 2 year treasury yield has fallen from a high of almost 3.0 in late 2018 to its current rate of 1.56, although the rate appears to have perhaps bottomed out since the beginning of August 2019. Low interest rates are therefore reducing the federal government’s borrowing costs.

With low interest rates, strong receipts and a booming economy, the US Congress has only itself to blame for its inability to curtail spending, and bring the federal budget back into balance. Fiscal profligacy of this magnitude is weakening the United States’ security and standing in the world, and ultimately threatens to lead to the dollar’s loss of global reserve currency status. When that happens, the US Treasury will have little to protect itself from an inflationary spiral.

Michael Lebowitz and Jack Scott: The Problem With Pragmatism… and Inflation

Michael Snyder: Deep Economic Suffering Has Erupted All Over America, but Guess Who the Federal Reserve Is Helping?

‘Angels in Marble’ Turn Out in Force for the Conservatives