One wouldn’t expect the grocery department of a big box retailer to spark debate, but Walmart’s high market concentration in the grocery space is doing just that.

By now, Walmart’s rise to the top of the retail pyramid is well documented. The Supercenters that dot the American landscape have had a dramatic ripple effect on surrounding communities, often resulting in decreased competition and reduced selection for consumers. Today, in some communities, Walmart takes in a whopping $19 for every $20 spent on groceries.

Today’s map, based on a report from the Institute for Local Self-Reliance, looks at which places in America are most reliant on Walmart to put food on the table. 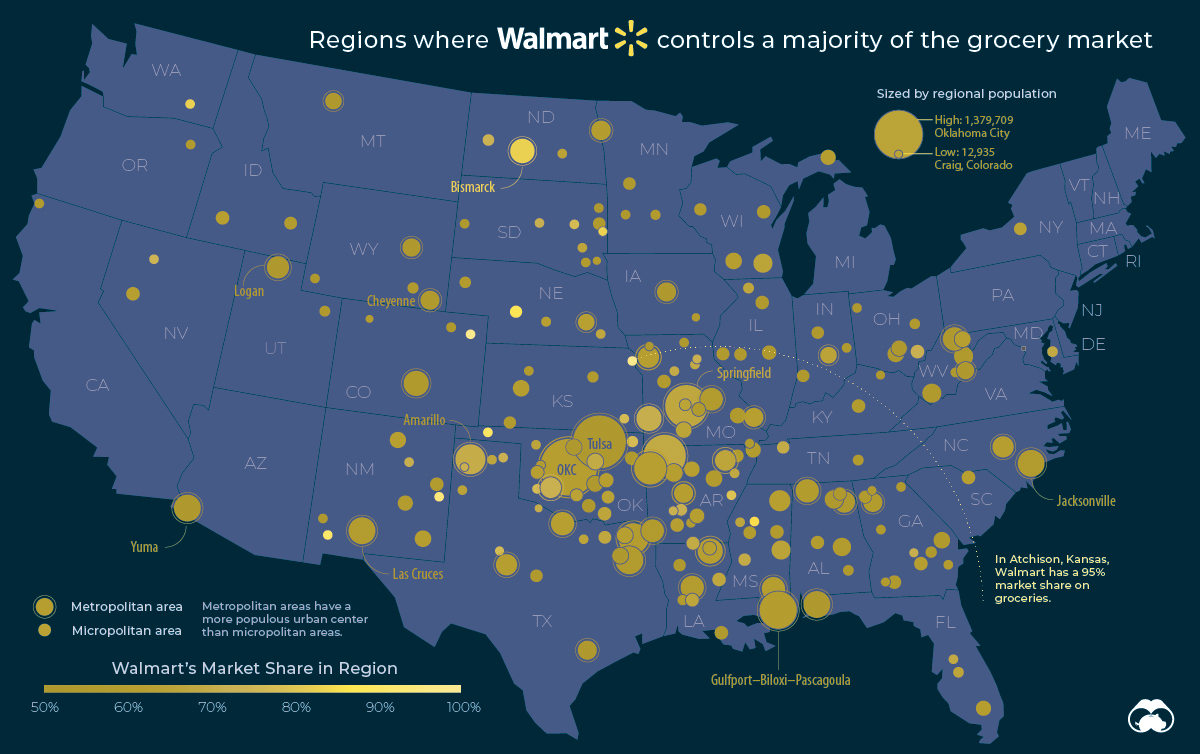 The Weight of Walmart

Walmart has an unprecedented amount of control over the food system, now capturing a quarter of every single dollar spent on groceries in the United States.

Walmart isn’t just a major player — in some cases it’s become the only game in town. In a few of the communities listed in the report, Walmart commands a 90% market share and higher.

Here’s a breakdown of the top 20 towns dominated by Walmart in America:

While it’s more likely for a small town to become dominated by a single grocer, Walmart’s clout isn’t exclusive to rural America. Even in Springfield, Missouri — with a regional population of half a million people — the big box retailer still boasts a sizable market share of 66%.

Under guidelines established by the Justice Department’s Antitrust Division, markets in which one corporation captures more than 50% of revenue are defined as “highly concentrated.” Walmart’s market share meets or exceeds this measure in 43 metropolitan areas and 160 smaller markets around the United States.

In some states, this trend is even more pronounced. In Oklahoma, for example, 86% of the state’s population lives in a region where Walmart has the majority market share in the grocery sector. In Arkansas — the home state of the megaretailer — half the population lives in this “highly concentrated” grocery market situation.

This degree of market concentration means that a retailer could cut certain products or manipulate prices without fear of losing customers. Worse yet, a company could close up shop and leave thousands of people without adequate grocery access.

There is a flip side to this story, however.

Walmart has shown a willingness to expand their grocery business to areas that were considered “food deserts” (i.e. low-income areas without easy access to a supermarket).

In a 2011 initiative, the retailer committed to open or expand 1,500 supermarkets across America to help give more people access to fresh food.

With the ground game clearly won, America’s largest grocer is now focused on dominating the next frontier of the grocery market – delivery. Stiff competition from companies like Amazon and Instacart will keep Walmart’s online market concentration in check for the time being.

The British Medical Association Is to Consult on Assisted Suicide

Kirk Durston: Why Sexual Morality May Be Far More Important than You Ever Thought